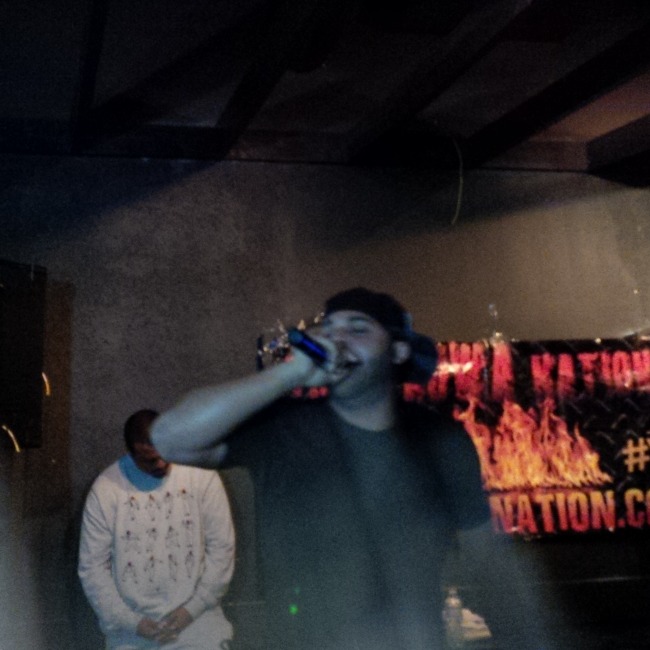 Joell Ortiz has come a long way as an artist.  He’s had problems with labels accepting his image, saying a chubby Puerto Rican rapper isn’t marketable (although now he’s noticeably lost some weight).  He formed the Slaughterhouse group with Royce Da 5’9″, Crooked I and Joe Budden, and made some critically acclaimed music with them in the underground hip hop scene.  With the success of that group he was able to finally put out a solo album (2010’s Free Agent) and get signed to Shady Records.  He’s performed at all kinds of venues from small ones that didn’t even have a stage to large stadium concerts with Eminem.

I’ve been trying for years to see Slaughterhouse and/or its individual members in concert.  I remember every time they came to Toronto, I always had other priorities like midterm exams keeping me from going.  I wanted to see them at the 2009 Rock The Bells festival in L.A., but that was the night Joe Budden’s beef with Raekwon got out of hand and they were late getting to the stage; by the time they were on the small stage, Nas & Damian Marley were already performing a historical set on the big stage.  I almost saw them at the 2011 Rock The Bells festival in New York, but with so much going on between three stages plus artist meet & greets in the VIP area, I only caught the last verse of the last song of their set (Joell & Joey’s back-and-forth on “The One”).  It was exciting getting to finally see a full-length Joell Ortiz show, and I’ll be even more excited when I get to see the whole Slaughterhouse crew in the future.

Krazy Cactus is one of the smallest venues I’ve ever been to; it’s basically a sports bar with a small stage in the middle of it.  I like small venue shows because you get to be more interactive with both the artists and the crowd around you.  I was chilling out playing pool with my homie during the opening acts, and I got a lot of compliments from people about my “Pure Hip-Hop Nutrition Facts” t-shirt.  Joell finally came out from the kitchen and rocked the stage with some classics.

He came out to “Ortiz In This Bitch” off his 2009 Road Kill mixtape and then got into some classic Slaughterhouse songs like “Sound Off”, “Microphone”, and his verse from the famous Shady 2.0 Cypher at the 2011 BET Awards.  He also did some of his solo songs like “Hip Hop”, “Battle Cry”, and a newer single called “Roll Deep” (I’m not sure when his next solo project is coming out, but he did mention working on a new Slaughterhouse album).  While he has a moderately-sized catalogue of mixtapes to go with his couple albums, he chose to spend a good amount of time paying tribute to Big Pun, 2Pac and The Notorious B.I.G. by playing their songs.  Big Pun is an obvious influence on any hip hop artist but especially Joell due to them both being Puerto Rican.  This show was also about a week after the anniversary of 2Pac’s death, which is also the anniversary of the release of Biggie’s Ready To Die album (Joell knows his sh**).

This concert felt more like we were just chilling with Joell as he played some of his favourite songs by these artists and showed us some of his own songs.  Before we knew it, he was leaving the stage while teasing us with Big Sean’s “Control” beat playing (he was one of the first to respond to Kendrick Lamar’s verse and to this day has one of the best responses).  It felt like a short set, but I can’t complain with the cheap ticket price.  As I’m posting this, Joell is scheduled to perform in Toronto tomorrow night and Hamilton a few days later.  If you’re reading this and are in the area, I’d recommend catching one of his shows.  The tickets are cheap if you get them early and while his catalogue isn’t that deep, he’s a skilled emcee who performs well without a hypeman.