Finally, Cam’ron has been able to get his business straight and cross the border to go on a Canadian tour.  Starting in Montreal the previous night, Cam’ron touched down in Toronto for the first time at the Danforth Music Hall.  Dubbed The First Of The Month Tour, Cam is out to promote his new series of EPs of the same title, with Volumes 1 and 2 already out and more on the way.  Other than these two new EPs, I haven’t paid much attention to what Cam has been doing these past few years, and it seems he’s been hush about things too.

While I don’t know much of his newer music (if there is any), Cam’ron is an artist I respect because he came out in the golden era of hip-hop with Big L and Murda Mase.  I later became a huge fan of his in high school when The Diplomats (Dip Set) were dominating the airwaves with Cam as their leader.  While I wasn’t really into the entire crew, Cam’ron and Juelz Santana were making that ignorant sounding music that’s still prevalent today, but with better rhymes than today’s radio rappers.  I eventually grew out of that phase as Dip Set also seemed to fade away, but still respected Cam’s ability to come up with funny rhymes.  With not much going on other than these solo EPs and rumours of a Diplomats reunion, I was expecting Cam to dig back into his classics for this show. 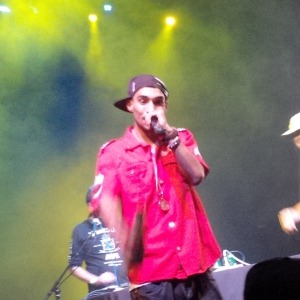 I got to the venue pretty early, as the floor wasn’t even halfway full yet.  From talking to people around me, I found that some people travelled a long way to see Cam’ron; some from as far north as Lake Huron and others from Buffalo in the south.  Pretty soon the local opening act, Juvi Dizzle got on stage to wake up the crowd.  Juvi did his thing, along with a Tony Yayo lookalike hypeman, but the crowd didn’t seem to respond much as they probably wanted to just see Cam’ron.  After a solid 40-minute set, Juvi got off stage and there was a bit of a wait before Cam got on.

Cam’ron came out rocking a lot of the gear that was on sale at the merch booth, including a Dip Set hat and hoodie.  He came out to the classic Purple Haze track, “Killa Cam”, and got right into other older hits like “Live My Life”, “Get Em Girls” and “Bout It Bout It Part III”.  After the first segment, Cam took off his hoodie and threw it to a lucky fan in the crowd before continuing the show with “Wet Wipes”, “Get Em Daddy (Remix)”, “Certified Gangstas”, and mellowed things out with “Purple Haze”.  During this segment he caught a pair of panties out of the air, making it known that ladies are in the building.

Next was a segment for the ladies, as Cam got into songs like “Oh Boy”, “Hey Ma”, and “Speaking in Tungs” before asking them which ones will “Suck It Or Not”.  He then performed “Down & Out” before getting into a Dip Set segment, which included “Salute”, “Dip Set Anthem” and “I Really Mean It”.  Just when the night was really getting hype though, Cam told the crowd how much he appreciates his fans’ support and quickly wrapped up his set with the new song, “Dipshits”.  His set only lasted about 40 minutes and it wasn’t even 11pm when the show ended.  I was expecting a short encore with maybe “Crunk Muzik” or a Big L tribute with “8 Iz Enuff”, but Cam never came back out (even though the crowd waited and chanted).

Overall, the Danforth Music Hall was a fun venue as usual.  The building wasn’t as packed as when I saw Shad and Brother Ali here in January, but the crowd was more energetic than the Pusha T crowd in February.  You could tell Cam’ron has a loyal fan base, as the majority of the people in the crowd had some form of Diplomats clothing.  Even though his set was cut short, Cam still had good stage presence, rapping most of his lyrics without a hypeman (although he did rap over his own voice from the original recordings).  Now we just need the rest of the Diplomats to make it over the border for a reunion tour.