eMC is a hip-hop group I knew nothing about until this year, which is surprising because it is led by hip-hop legend Masta Ace.  Masta Ace is like the Tim Duncan of hip-hop; the way Tim’s been consistently great, winning NBA championships in three different decades, Masta Ace has released classic music in the 1980’s, 90’s, 2000’s and 2010’s.  While as a younger fan I’m unfamiliar with his older work, I have heard all of his solo albums from 2001 onwards.  Joining him in the group are frequent collaborators on his albums: Stricklin, Punchline & Wordsworth.  As eMC, they released an album in 2008 which I haven’t heard, and have a brand new EP out in 2014 called The Turning Point, which I’ve had in heavy rotation lately.

eMC is currently on their Northern Exposure Tour to promote the new EP as well as an upcoming sophomore album.  They will be in Toronto a few days after my posting this review, but the smaller market in Hamilton was bound to be a more intimate show.  Plus the show being on a weekend made things easier.  Not only was this about promoting the new music, but I was hoping to get a chance to see the legendary Masta Ace perform some of his solo hits as well.  With this being my first time going to This Ain’t Hollywood, I wasn’t sure what to expect.

I showed up well over an hour after the doors had opened, yet the building only had a handful of people inside.  There was one opening act already on stage, but he didn’t seem to draw much attention as people were more focused on their drinks.  This was one of the smallest venues I’ve ever been to, kind of like the Casbah (also in Hamilton).  This Ain’t Hollywood did have a nice selection of booze though, including Red Stripe beer.  After a long wait, a few more people arrived at the venue and New Breed MC (pictured above) called for people to get out of their seats before he began his set. 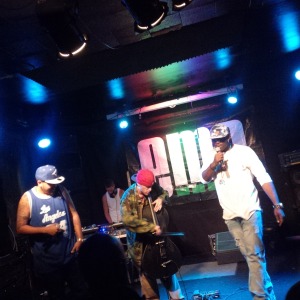 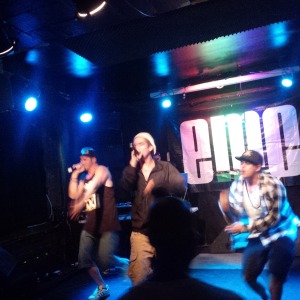 New Breed had a solid set to promote his EP, of which he threw a copy into the crowd at one point.  After him was another local group called Babylon Warchild, which consisted of two emcees, a DJ, and a fourth member acting as a combo hypeman, cello player and MPC player.  The cello made them unique, as they would play parts live on the instrument and then seemed to loop the beat on the spot.  The final opening act was a group from Vancouver called KIDS, whose energy kind of reminded me of some old-school Beastie Boys.  While it was hard to pick up the rhymes they were spitting, they definitely had great stage presence and kept the energy levels really high.

By now there was a decent sized crowd for the small venue, as the eMC crew made their way to the stage.  They came out to the first song off the new EP, “Stay Busy”, before getting into a bunch of tracks I assumed were off the first album, because I didn’t know them.  One thing I noticed is they put a lot of work into their stage presence, timing their movements so the chaos was more organized.  Sometimes they’d move in a circle as each emcee rapped their verses, sometimes they’d stand in a line as the emcee rapping took the front of the stage.  Wordsworth even jumped into the crowd and rapped amongst the people a few times.  At one point Stricklin got off the stage so that Ace, Punch & Words could do songs they have as a trio, including one of my favourites: “Travelocity”.  To add some extra energy, they changed the beat to Jay-Z’s “You, Me, Him, Her” for Wordsworth’s final verse.

Masta Ace also performed “Block Episode” with Punch & Words, and they actually acted out the last verse of the song, with Wordsworth rapping while lying on the ground.  Next, Punch & Words got off stage so that Masta Ace could perform some songs with Stricklin.  They did a short cover of Eric B & Rakim’s “I Know You Got Soul” before getting into a track that sampled the lyrics “pump up the volume” for the hook.  I was hoping they’d do “Something’s Wrong” off Ace’s Disposable Arts album, or “F.A.Y.” off A Long Hot Summer, but those tracks never came.  When the rest of the group rejoined them on stage, they did something I haven’t seen at a lot of shows.

Before performing their cover/remix of A Tribe Called Quest’s “Electric Relaxation”, they talked to all the ladies in the building, getting their names, and then Wordsworth actually incorporated their names into his rhyme.  Next they did a few more songs off the new EP, explaining some of the concepts of the songs too.  They gave out all their Twitter accounts before performing “Verified”, and explained how they wanted to follow the trend of naming songs after people, but apply it to someone who’d smack a wack rapper before doing the new single:  “Charly Murphie”.  Punchline ran through the crowd, the entire length of the building during his verse.  They then wrapped up their set by backing up Masta Ace for his solo classic, “Good Ol’ Love”, before doing the last song off the new EP, “Turning Point”.

Overall, eMC didn’t let a small crowd in a small venue stop them from putting on a great show.  They had everyone engaged, enjoying the music, and showed their appreciation by sticking around to sign autographs (although I didn’t stay for that).  While you might expect a legend of Masta Ace’s stature to take the spotlight, he actually acted as an equal member of the group, really only doing one solo song on his own.  Strick, Punch & Words all got an equal amount of shine to Ace, and while I would’ve liked to see some more Masta Ace tracks like “Soda & Soap”, “Da’Pro” or “Home Sweet Home”, I liked seeing that style of leadership.  This wasn’t a “Masta Ace w/ eMC” show, it was eMC, and they played it accordingly.  It was a great hip-hop show, and I highly recommend my Toronto readers to check ’em out at Tattoo this Thursday.

Remember to check out the SYpherSights Youtube channel for more concert vids: https://www.youtube.com/channel/UCjiIhS7fd3t1ZutK1va7w8g/videos