There’s been a lot of hype surrounding Prophets of Rage, and until recently a lot of mystery.  On paper the newly formed group looks epic, as it is a combination of three well known groups that were prolific in the 1980’s and 90’s: Rage Against The Machine, Public Enemy, and Cypress Hill.  All three groups, to varying degrees, were about fighting oppression, racism, and pushing for human rights that are still hot issues in 2016, which is why it’s a big deal to see them unite.  In terms of new material, so far there has only been one new single and a few public and televised appearances, although it was recently announced that their first EP will be released on Friday this week.

Playing on Donald Trump’s presidential campaign slogan, Prophets of Rage have embarked on their Make America Rage Again Tour, pushing a message against hatred, corruption, and the political system that led to the USA’s current presidential election coming down to two unfavourable candidates.  With the energy of Rage Against The Machine backing the powerful and still relevant messages of lyricists Chuck D and B-Real, the newly formed group is bound to put on an energetic show.  It would be my first time seeing any of these musicians perform, with the exception of B-Real, who I had briefly seen with Cypress Hill at the 2011 Rock The Bells festival in New York. 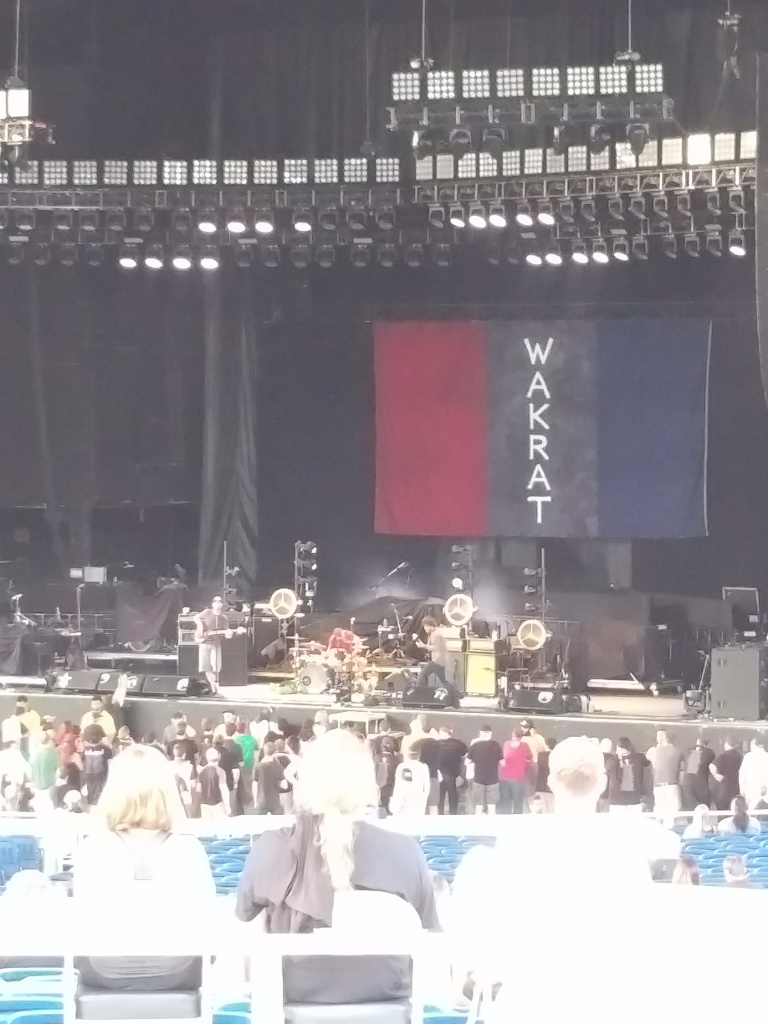 Shortly after arriving at Molson Amphitheatre, French band Wakrat got the show started as the first openers (note: they sang in English but are originally from France).  They seemed to be raw heavy metal, with nothing but hard guitar riffs and a lot of shouting.  The energy and vibe was cool, although the crowd didn’t seem to be that into it.  This had to be the smallest crowd I had seen at the Amphitheatre, which was understandable.  Most fans of Rage, Public Enemy or Cypress Hill are likely old enough to have full-time careers and/or children preventing them from going out on a Wednesday night.  This had me curious as to why Prophets of Rage would choose to live-stream this particular show as opposed to one on a weekend.

The next and final opener was Awolnation.  While they weren’t as metal as Wakrat, they had some cool songs, and the crowd seemed to know some of them too.  They also had a pretty badass drum solo, that led to a guitar solo too.  The crowd slowly got bigger during their set, and it was surprising to eventually see the Amphitheatre get filled closed enough to capacity on a Wednesday night, given the demographic of fans.  The sun set, and there was a little relief from the scorching heat with a lakeside breeze.  Awolnation was a good warm up, but it was time for the band we all came to see, Prophets of Rage. 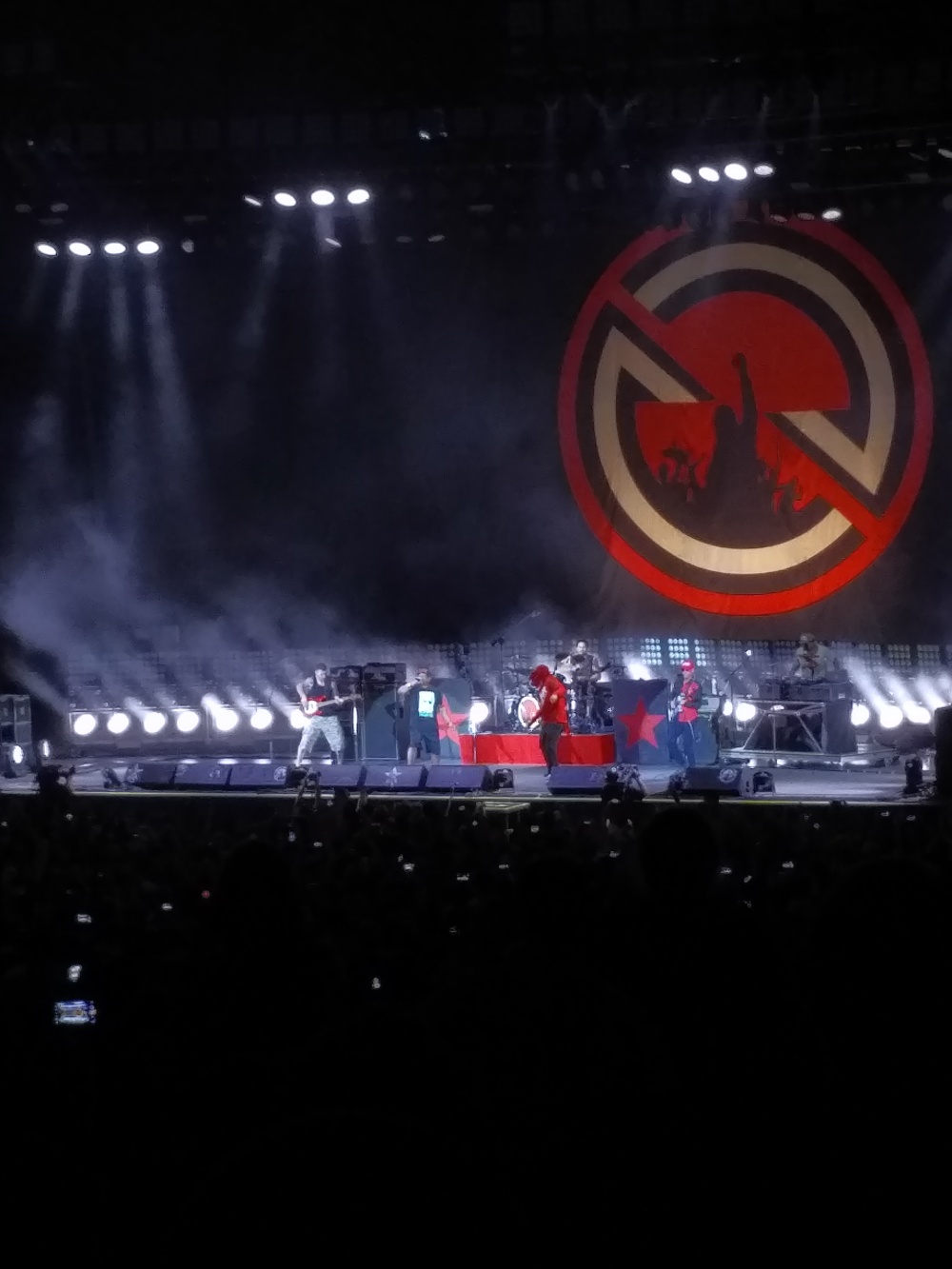 DJ Lord was first to come out, as he went to work on the turntables, spinning some classics.  He paid tribute to some fallen legends including Michael Jackson, David Bowie, Ol’ Dirty Bastard, MCA, and Kurt Cobain.  DJ Lord showed off more than most DJs, even going behind his back to do some scratches at one point.  Eventually the whole band came out, Chuck D wearing a Cypress Hill shirt and B-Real wearing a Public Enemy shirt, and they got their set started with the self-titled single.  With the unique, new song out of the way, they then got into a medley of covers from all three of the original groups.

They covered Rage Against The Machine’s “Bombtrack” and “Take The Power Back,” Public Enemy’s “Miuzi Weighs A Ton,” and Cypress Hill’s “Rock Superstar.”  The live instrumentation made the rap songs extra energetic, while B-Real and Chuck D’s vocal covers on the Rage songs gave them a unique twist.  While they can’t exactly do justice to Zack De La Rocha’s vocals, Chuck D’s booming voice can emulate the chants well while B-Real’s high pitch is effective at nailing Zack’s verses.

Eventually the band took a break and let DJ Lord handle the sound while Chuck D and B-Real went right up into the crowd for some strictly hip-hop.  They went back and forth with some hits by their respective groups, B-Real crowd-surfing while rapping “Insane In The Brain” and Chuck D clapping hands with fans during “Bring The Noise.”  After B-Real did another Cypress hit with “Ain’t Going Out Like That,” Chuck D wrapped up the hip-hop segment with “Welcome To The Terrordome.”

Rage Against The Machine’s guitarist Tom Morello took some time to talk about the charities this tour is supporting, helping shelter the homeless, before bringing back Awolnation’s lead singer to cover Bruce Springsteen’s vocals on “The Ghost of Tom Joad.”  The band then got back into RATM covers with B-Real and Chuck D, performing “Bullet In The Head” and “Know Your Enemy.”  B-Real actually slayed De La Rocha’s verses, although it was hard to hear the vocals over the loud guitars.  They also performed Cypress Hill’s “Shut ‘Em Down” off of their 2010 album Rise Up, which actually features Tom Morello’s guitar on the studio recording.  Tom and DJ Lord had a cool back-and-forth between the turntables and guitar here too.

Next was a cover of The Beastie Boys’ “No Sleep Til Brooklyn,” which is apparently renamed “No Sleep Til Cleveland” on the upcoming EP.  Tom Morello rocked a wicked guitar solo, flipping his guitar upside down to reveal “Nobody For President” written on the back of it.  What followed was a surprise that made it evident why streaming this show was worth it: the legend Dave Grohl of the Foo Fighters came out to rock a song with Prophets of Rage, playing guitar and singing.  The first words he yelled into the mic summed up the crowd’s emotions: “what the fuck!!!!!”

The crowd got so loud that it was hard to tell what song was being played from way up in the 400 level (research would later tell me it was a cover of MC5’s “Kick Out The Jams”).  Dave took the lead with the rest of RATM, and Chuck D and B-Real even got to spit some rap verses on the song too.  After blowing off the roof with the completely unexpected surprise (why was Dave even in town??), Dave Grohl left and Prophets of Rage wrapped up the show with a RATM favourite, “Killing In The Name.”  The logo banner behind the band dropped to reveal another one with the words Make Canada Rage Again, and the crowd was all hype as they shouted the lyrics with the group.  After ending the set, all musicians took the front of the stage for some photos, and B-Real left us with a simple reminder: “legalize it,” as he lit up a joint on stage.

This was an overall fun show to attend.  While I’m not in the right demographic to be able to say I’m a die-hard fan of any of the three groups (although I was one of the few rocking a Cypress Hill shirt), I did enjoy hearing them all collaborate to cover each others’ songs.  I can’t even be mad at Rage Against The Machine moving on without their lead singer – this is the next best thing for people who never got to see them back in the day!  The band seems to have a clear vision for where they want to take their music in the future, and they go over the top with their performance, even without the special surprise guests.  Look out for the new EP dropping this week, and this entire concert can be streamed on the Prophets of Rage Facebook page.