The last Friday of July 2018 in Toronto was an epic one for Hip-Hop heads. Whether you saw Ludacris headline Toronto’s Festival of Beer at Bandshell Park, or Ice Cube host his Big3 basketball league at Scotiabank Arena, those looking to keep the party going got to see a late, late night show at Rebel Nightclub featuring Busta Rhymes. It’s been close to a decade since Busta Rhymes headlined a show in the city, which would make this a rare, epic opportunity for fans of classic Hip-Hop.

We started our night at Beer Fest with the Ludacris concert (read the full review here), and caught a cab to get to Rebel around 11:30pm. Lil’ Kim was actually supposed to co-headline this concert with Busta, but fans received an email a few hours before the show saying that due to severe thunderstorms in New York, Kim’s flight had to be cancelled. Fortunately, Busta Rhymes was already in town and ready to keep the party going!

With Lil’ Kim not there to fill the first time slot, the DJ would play several Hip-Hop classics with the music videos playing on the jumbo screen behind him. Fans jammed out to Big Pun, Wu-Tang, Jay-Z, and even a Ludacris video as they waited, and the DJ threw some free t-shirts to those fans who could rap along to the verses. Caribbean vibes eventually began to fill the room, as the DJ started playing calypso chunes and several dancers took the stage, looking ready for Toronto’s world-famous Caribana Festival next week. It became a full on dancehall party, with songs by Beenie Man and Sean Paul playing as the dancers on stage wined.

Those looking to use GO Transit to get home were out of luck, as the dance party dragged on until almost 2am before Busta Rhymes would take the stage. When he eventually came out, the energy got live right away, as he got right into two of the biggest, most energetic party anthems he’s ever featured on: A Tribe Called Quest’s “Scenario” and M.O.P.’s “Ante Up Remix.” After getting the crowd jumping with the first two songs, Busta took some time to address some technical issues with his mic and speakers, walking right up to the soundman.

When the sound issues eventually got fixed, Busta Rhymes and his longtime hypeman Spliff Star took it back to 1997 with “Put Your Hands Where My Eyes Could See” and “Turn It Up, Fire It Up.” Wanting the crowd completely energized, Busta told some fans to put their phones away, and strategically got everyone to oblige by performing “Make It Clap” next, getting everyone to clap their hands to the chorus. This transitioned smoothly into the clapping samples on Lumidee’s “Never Leave You,” which Busta paused abruptly after the chorus to get into his own slow jam for the ladies, “I Know What You Want.” Things wouldn’t stay mellow for long though, as Busta then cranked the energy back up by taking it to 1996 with “Woo-Hah!! Got You All In Check,” his choreography with Spliff Star mastered over twenty years.

Next, Busta Rhymes would spit some of the fastest verses he’s done over the years, all without backing vocals and with minimal plugs from Spliff Star. He would perform his verse on Chris Brown’s “Look At Me Now,” and followed up with “Break Ya Neck,” restarting the song part way through the first verse to put emphasis on his incredible breath control. He had the biggest smile on his face as he completely slayed the rapid-fire verses. Busta would then get into some of his bouncy club hits, performing “What It Is,” “Touch It,” and “Arab Money,” getting the crowd to dance.

Keeping the party going, Busta & Spliff brought out champagne bottles for a toast, as Busta brought his firstborn son on stage for a hug, and also praised Spliff for battling through health issues to still be able to tour with Busta after all these years. The bottles got popped and sprayed on the crowd as Busta got into the certified crowd-rocker, “Pass The Courvoisier,” with the famous lyrics “don’t this shit make my people wanna jump?!” getting the entire crowd jumping. 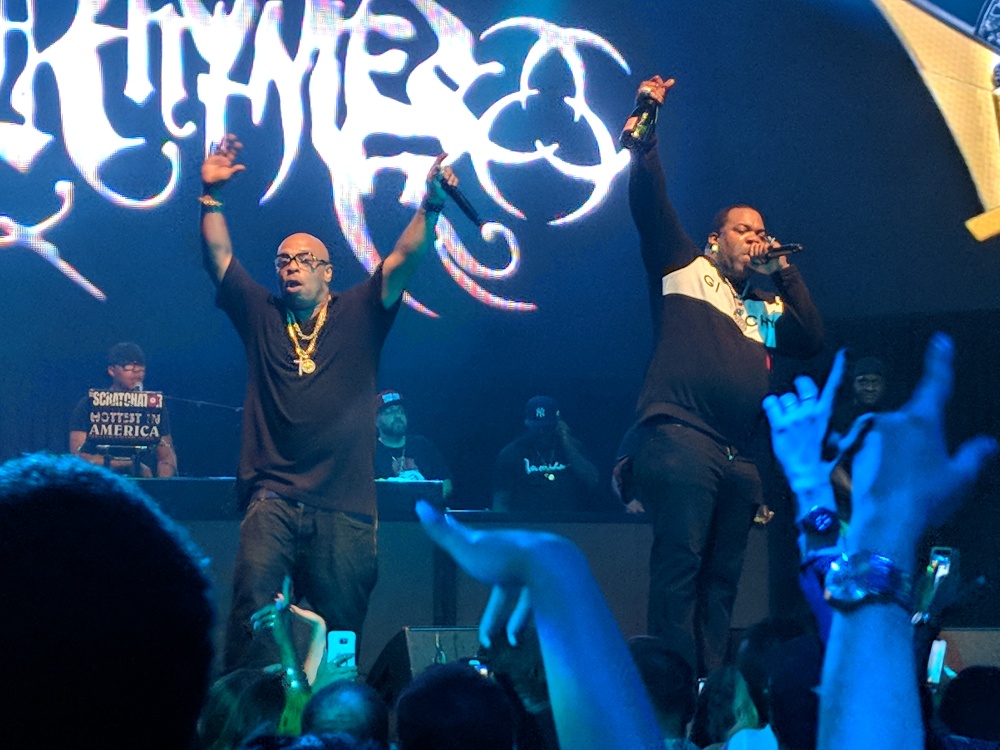 With the clock going past 3am, Busta Rhymes closed the show with the chorus to “N.Y. Shit,” saying to hell with Toronto’s early curfews. He then came down to the VIP pit on the dance floor to spend some time meeting and taking selfies with fans, as the DJ played some more chunes. It was a late show that left some fans feeling drained, especially after partying all day a Beer Fest before this, but that only tells you that Busta put on an epic show as expected. The legendary Brooklyn MC took us through the hits, performing with mastered execution of choreography, breath control, and showmanship. It’s been almost ten years since I last saw Busta Rhymes perform live, and he has not lost a step with age. The reputation remains true: when Busta Rhymes happens to be in your city, you pay full price for your ticket, come prepared to spend a lot of energy, and definitely get your money’s worth.