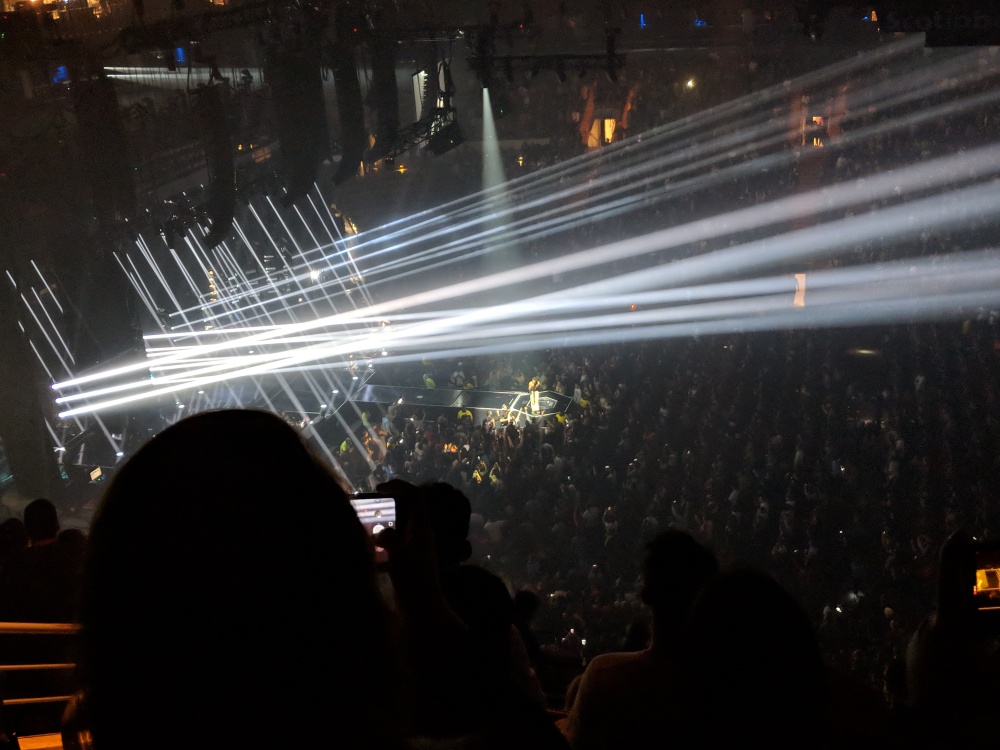 It’s been four years since Donald Glover last went on tour as his Childish Gambino persona, and in those four years, he’s propelled himself into stardom. Back then he was an up-and-coming MC, singer, and producer with a couple acclaimed albums and several mixtapes under his belt, as well as a comedian with a couple standup specials, and an accomplished TV writer and actor. He was able to sell out the Sound Academy for two consecutive shows on his last tour, and now he’s become big enough to fill up Scotiabank Arena (f/k/a The Air Canada Center) on a Monday night.

Since the last tour, Donald Glover has expanded on all aspects of his diverse career. He’s had prominent acting roles on the big screen in Star Wars, Spiderman, The Martian and the upcoming Lion King remake, and has won Emmy and Golden Globe awards for his directing, acting, writing and producing on his TV series Atlanta. On the music front, his last album as Childish Gambino, 2016’s “Awaken, My Love!”, saw him step away from Hip-Hop and dive full-on into Funk, Soul and RnB. The album earned him a Grammy award, and more recently he’s begun releasing singles for an upcoming fourth Childish Gambino album that’s rumoured to be his last. Between the trap-styled “This Is America” and the bright, upbeat “Feels Like Summer,” the yet to be titled album is looking to be his most diverse sounding yet.

Gambino has now embarked on his This Is America Tour, kicking it off in his hometown Atlanta last week and hitting Toronto for just the third stop of the 18-city tour. Demand has always been high to see Childish Gambino perform, especially now that he’s rumoured to be hanging up the mic after this last album. Although his music career has been ultra successful, his film career has taken him to new heights, and there’s no telling how much time he’ll have for music going forward. This would be his first time performing at Scotiabank Arena, and it could very well be his last. 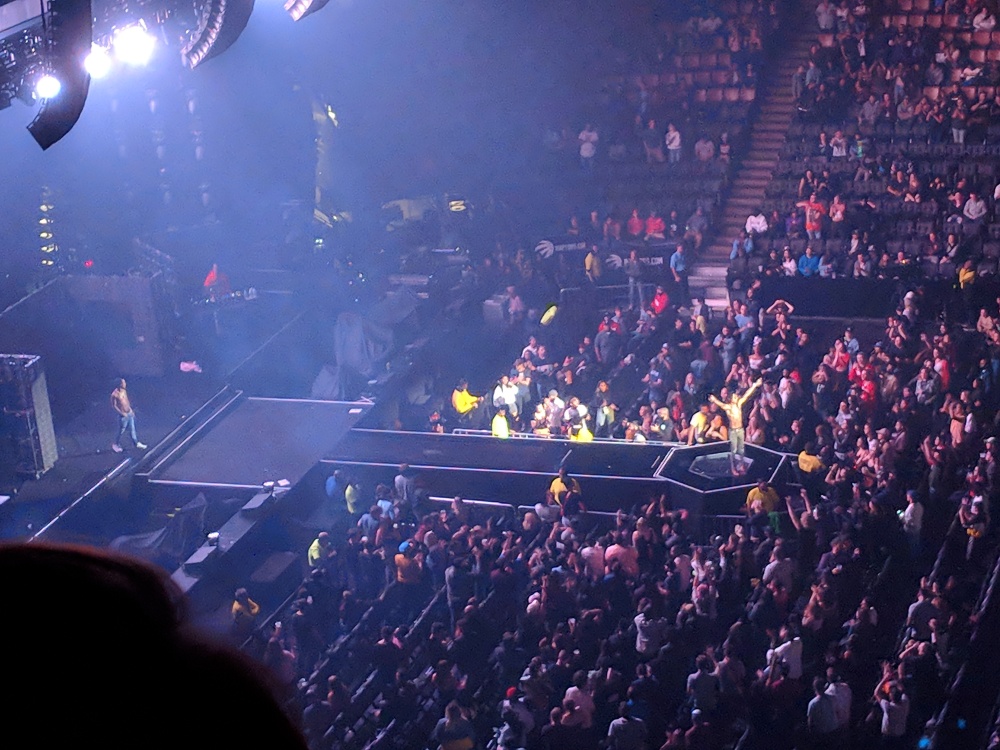 Joining Gambino on tour would be Mississippi duo Rae Sremmurd. We showed up to the arena midway through their set, and they were hyping up the fans on the floor. Not being fans of theirs whatsoever (“No Flex Zone” has to be one of the most annoying rap songs I’ve heard), we spent most of their set at the bar getting drinks, waiting for the autotuned weak-rhyming wack shit to end. To their credit though, their beats had hella bass to them, and they brought a ton of energy even though they were basically yelling over their own vocal recordings.

Eventually the lights went dim, and as the fans were fixated by the light show and images on the big screen, Mr. Glover himself appeared on the centre-stage platform among the smoke. 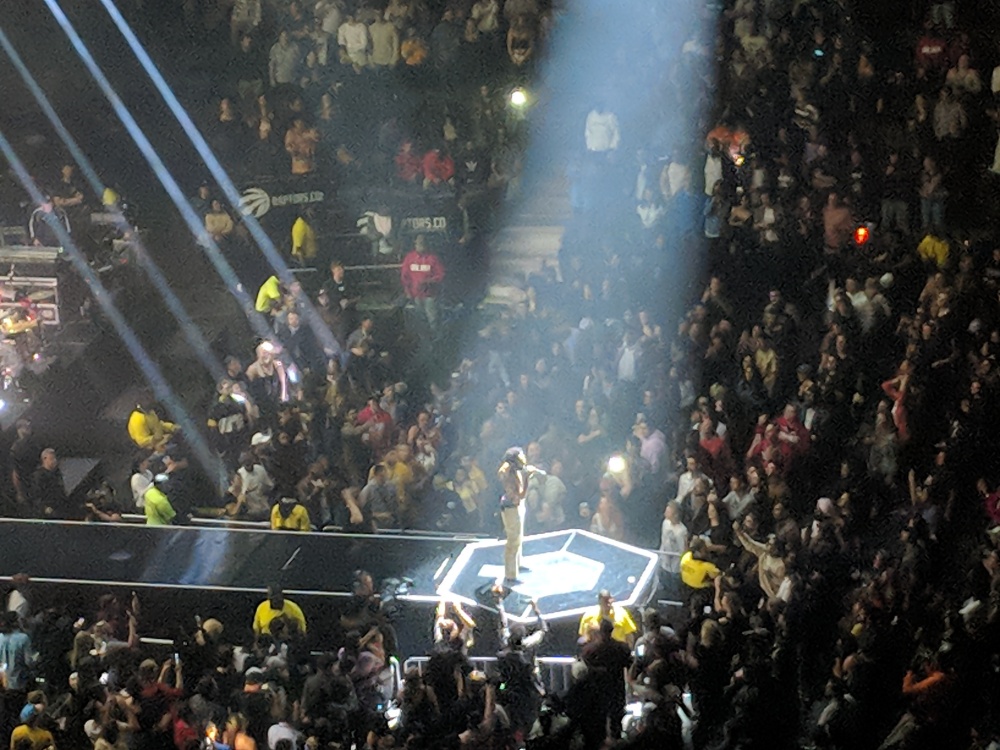 After talking to some friends in the U.S., we learned that Childish Gambino did a cool thing by sending out an email to ticketholders with two new songs he’d be premiering on tour. Unfortunately, us Canadians never got the email, and so we didn’t know the words to sing along as he opened the show with the unreleased “Algorythm.” Gambino did quickly get to the familiar though, as he performed one of his 2018 singles “Summertime Magic” before taking it back to 2013.

For fans who miss the rapping Gambino, he performed a couple songs off his sophomore Because The Internet album, rocking the upbeat “The Worst Guys” and letting the guitarist in his band do a wicked solo. He followed this with “Worldstar,” and much like the website the song is named after, he created a viral moment by having a camera follow him backstage as he walked through the hallways of the arena and found himself among the fans in the lower bowl. Now standing amongst the people in the stands, he performed the soulful “Stand Tall,” getting the crowd to sing with him as he made his way back to the stage.

Having never toured since “Awaken, My Love!” was released, Gambino took the opportunity to dive deep into that album, performing songs like “Boogieman,” “Have Some Love,” and “Riot.” His vocal talent really showed on these songs, as he seamlessly went from rapping to screaming soulfully. The stage show was nice too, as the smoke machines created a cloud for him to stand in as he sang “Terrified.” Next, he would bring it back to 2018 by performing his latest music video single, “Feels Like Summer,” as well as “Spirits,” keeping the mood bright.

(Edit: While “Spirits” is unreleased, it was not included in the email pack.  The second unreleased song U.S. fans received was “All Night,” which so far he’s only performed at the Atlanta concert.) 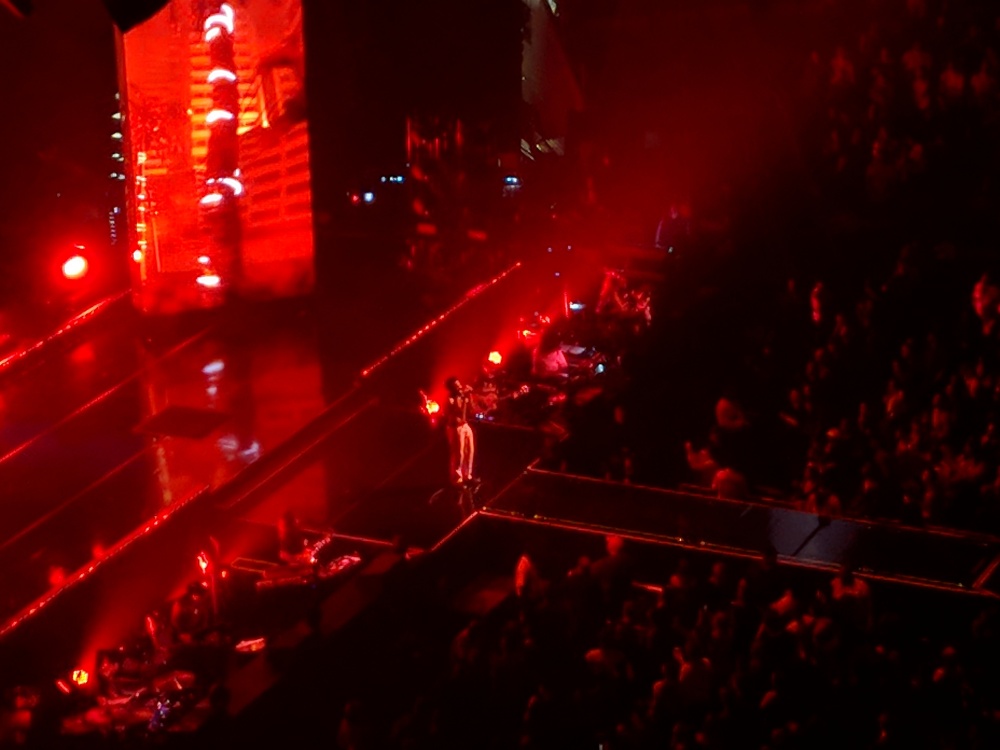 While Childish Gambino is an incredible performer, the concert wasn’t without its flaws. He next performed one of the biggest songs of 2018, and the song the tour was named after, “This Is America,” and the sound mixing was absolutely terrible. The fans still jammed out as Gambino had a whole squad of dancers join him on stage, but review of the tape shows a lack of bass when the trap beat drops, and Gambino’s mic being low. Many fans rocked along to it anyway, knowing all the words, but others noticed the sound issues right away, as the beat just wasn’t there.

After temporarily leaving the stage after the hit song, Gambino returned to rock some throwbacks, with slightly improved sound. He performed the mixtape single “Sober,” getting the fans to dance with him, and got everyone to sing along to “3005.” Relying heavily on dancing and singing throughout the show, Gambino did do one last rap-heavy track, “Sweatpants,” before wrapping up the show with his Grammy award-winning hit, “Redbone.” With the crowd and background vocals on the hook, Gambino let his vocal talent shine on this last song, giving a soulful scream-out as the band played an excellent live rendition of the instrumental. He then thanked the crowd for rocking with him and abruptly ended the show. 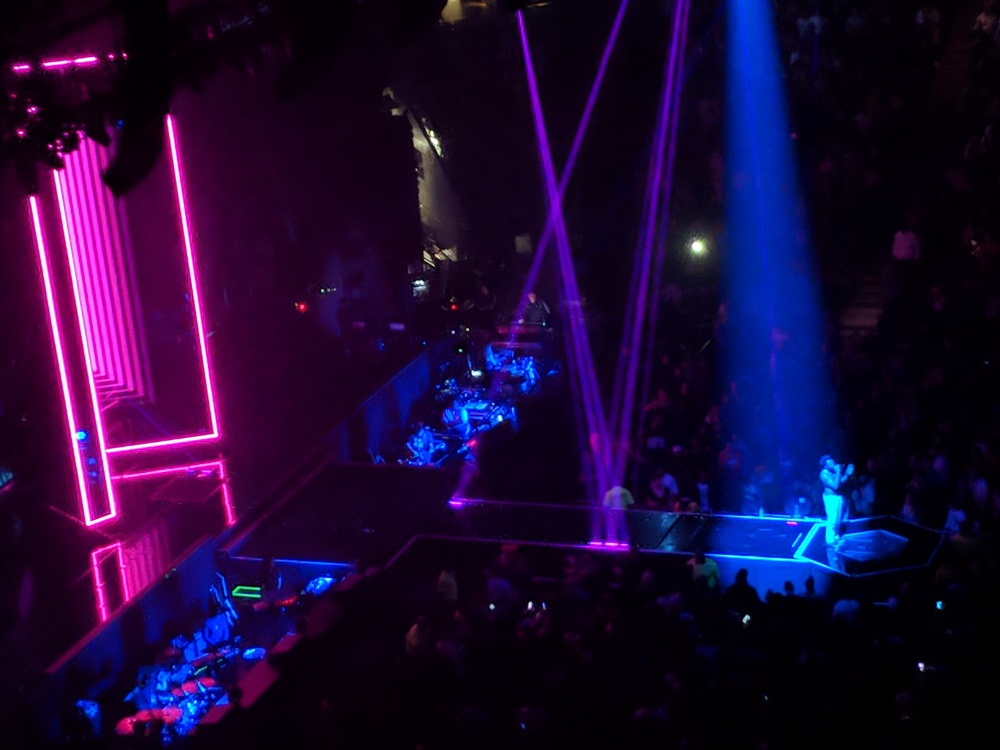 Seeing Childish Gambino perform in person really puts into perspective the incredible vocal talent he has. Some of the songs on that “Awaken, My Love!” album sound vastly different than the vocal pitch he has on his older rap records, but he can actually pull them off in person, with flare. For better or for worse, he did lean heavily on his newer RnB songs showcasing his vocal range and didn’t dive all that deep into his throwbacks. It may have been a letdown for fans who have waited years to see him perform live, to have him not do anything off of his debut album, Camp, or his mixtapes or EP (I personally really wanted to see him do “Freaks and Geeks”). The show also felt really short, although time does go by fast when you’re having fun.

Overall, despite the issues with sound mixing, Childish Gambino puts on a wicked show and is a proven elite entertainer. From the vocals to the rapping to the dance choreography and showmanship, Childish Gambino definitely deserves this platform on the big stages. It will be disappointing if this really is his last tour, as it felt like he skipped out on so much of his material and didn’t give the fans the full timeline of his career. This show was great, but he needs to come back and do a more diversified setlist, especially considering the rarity of his live performances and tours.