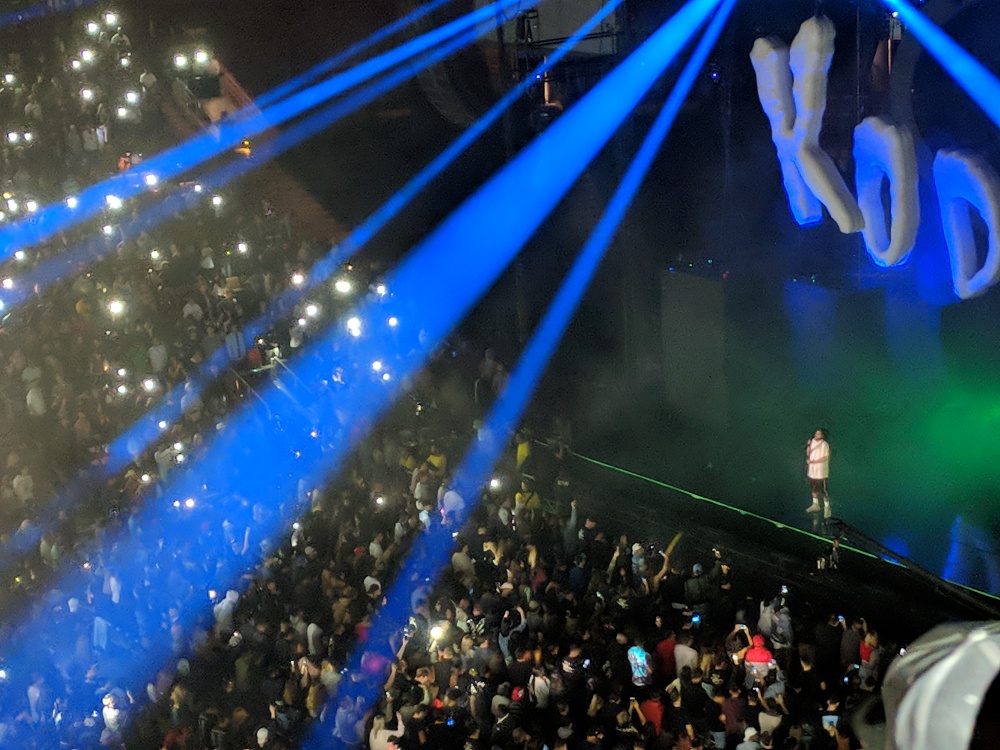 Each year, J. Cole does more to prove that he has the longevity to be a lasting force in Hip-Hop. Not only has he been consistently releasing meaningful music and putting up good sales numbers with every album, but he’s also adapted to the current climate where artists have to lean heavily on touring to generate income, and has made an art form out of touring itself. He released his fifth major-label album, KOD, back in April this year to critical acclaim, and has been on The KOD Tour since August. Nearing the end of the tour, the fifth-last stop would see him return to Toronto’s Scotiabank Arena for the first time since it was renamed (f/k/a the Air Canada Centre).

After seeing him perform in this same building last year on his 4 Your Eyez Only Tour, we’ve seen how J. Cole has evolved as a live performer. He explained then that he wrote all his songs to be heard, felt, and experienced, which is why he likes to perform every song off his most current album. Last year he performed the entire 4 Your Eyez Only album from beginning to end, with select favourites from his previous releases sprinkled in, and so we went into this show expecting KOD to get the same treatment. His latest album continues his streak of conceptually-focused projects with little to no guest features, earning either gold or platinum plaques. It’s also one of the most relevant, socially-conscious mainstream albums of 2018 with the way it tackles mental health awareness and various forms of addiction (RIP Mac Miller).

Joining J. Cole on The KOD Tour would be a handful of opening acts, the first being a group signed to Cole’s Dreamville Records, EarthGang. We of course saw the Atlanta duo perform a year ago at the Made In America Festival in Philly, just a few days after they first announced they signed with the label. They’ve since released a couple new EPs, and are gearing up to release their full-length Dreamville debut in 2019. They ran through a quick 20-minute set while people slowly found their seats in the arena, rocking a few favourites off their EPs like “Red Light” and “Meditate.”

Next up would be Jaden Smith, whose whole family is well known in the entertainment industry. Following in the footsteps of his father Will, Jaden has had his hand in both music and acting, although in recent years he’s leaned a bit more heavily on music. Performing songs off his 2017 album Syre, Jaden got the crowd moving as he rapped with his music videos playing on the screens behind him. Highlights include him moonwalking across the stage while performing “Icon,” and closing out his set with a second performance of “Icon,” this time jumping down into the crowd and running a lap around the arena while rapping.

After Jaden would be the most questionable artist of the whole tour, Young Thug. Known for weak lyricism, overuse of autotune and focusing more on adlibs to go with his mumble raps than actually spitting bars, Young Thug seems like exactly the kind of artist J. Cole was making fun of on the song “1985.” To give him credit though, he brought some good energy for his first ever performance in Canada. We weren’t sure how much crossover appeal he’d have with J. Cole fans, but a lot of the crowd got into his performance and chanted along with him chanting along to his own vocal recordings (yep, he’s one of those “rappers”). The dude can’t rap and he’s definitely a wack emcee in Hip-Hop circles, but in the broader world of pop-rap, he’s able to carve out a niche for himself with his party music.

There would be a break for the stage to be set up for J. Cole. A banner was hung over the stage showing the three meanings and themes Cole intended for his KOD acronym: Kids On Drugs, King OverDosed, and Kill Our Demons. The banner eventually dropped to reveal KOD balloons hung above the stage, along with several screens, and J. Cole himself.

While last year saw J. Cole portray his character on the 4 Your Eyez Only album, entering the arena in a jumpsuit and starting at the top of the tracklist right off the bat, his KOD performance would be a bit different. He’d be a lot more loose, wearing a white tee and shorts, and started his performance near the end of the KOD album with “Window Pain (Outro).” After setting the tone, he cranked up the energy in the arena with a couple throwbacks from 2014, getting the crowd to put their hands up to “A Tale of 2 Citiez,” and rocking the braggadocious “Fire Squad.” The jumbo screens would show a clip of him putting on a fake smile at the Grammy Awards as he rapped that line about Iggy Azalea potentially winning one, causing a bit of laughter.

Cole would get back to the new KOD album, performing some of the more mellow tracks like “Photograph” and “The Cut Off.” The latter track had a cool twist to it, as the live band (hidden from the stage) played the piano riff from Jay-Z’s “Dead Presidents” for Cole to do some of his singing over. With the crowd mellowed out, Cole would switch up the tempo and get everyone dancing to “Deja Vu” before doing some of his bigger hits off the new album. He’d get back to the KOD tracklist with “ATM,” “Motiv8,” “Kevin’s Heart” and “Brackets,” gradually transitioning from an upbeat celebration to a poetic downfall. 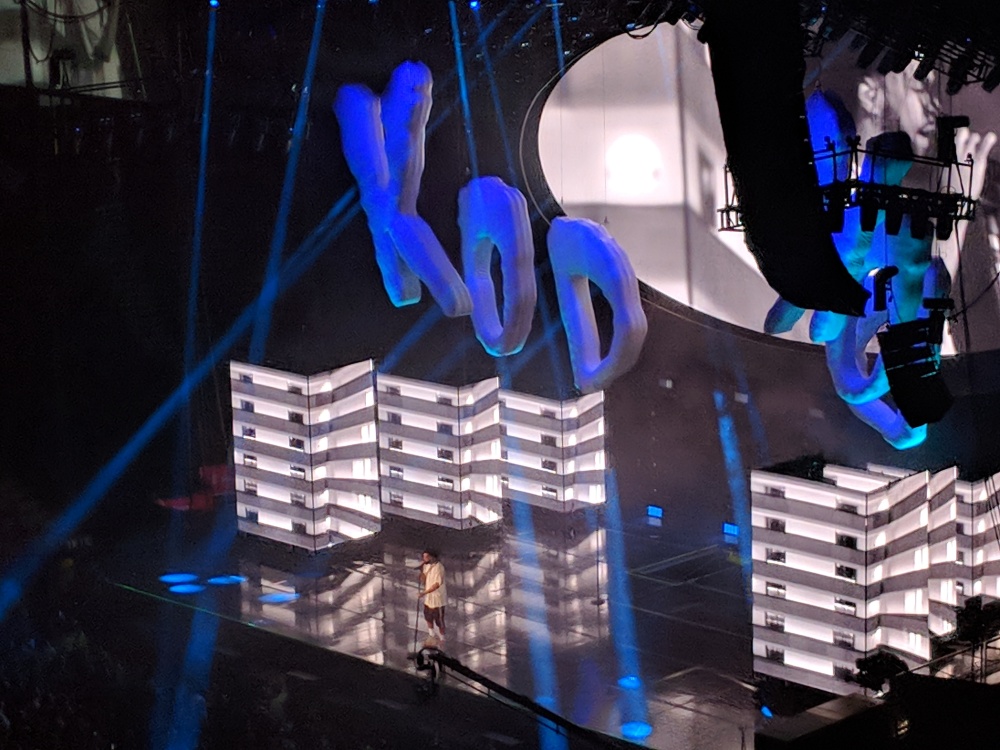 The crowd cheered as Cole’s song “Brackets” and a short speech afterward critiqued the government’s use of tax dollars. Always one to skillfully simplify things to connect with a broader audience, Cole would take some time to talk about the long grind and perseverance needed for him to get here, before taking things back to his 2011 debut album, Cole World: The Sideline Story. He’d rock some of his older, less serious party tracks including “Nobody’s Perfect,” “Workout,” and “Can’t Get Enough,” getting the crowd to sing along and dance. He then mentioned how he became big enough to start doing arena tours after 4 Your Eyez Only, and did a couple more songs off that album with “Ville Mentality” and “Neighbors.”

While KOD is a great album, some may still consider Cole’s best work to be 2014 Forest Hills Drive, and so he’d next perform several songs off that album. The forever relevant “Love Yourz” got the entire arena to light up their cell phones and vibe out, and Cole would gradually pick up the tempo with “Apparently,” “Wet Dreamz” and “G.O.M.D.,” eventually getting everyone bouncing again. After rocking one last throwback hit with 2013’s “Power Trip,” Cole would close out his set with the title track off the new album, “KOD.” Absolutely slaying the rapid-fire flow, images of golden goats symbolizing Hip-Hop’s G.O.A.T. acronym would fill up the jumbo screen around Cole as the camera zoomed in on him killing that second verse. 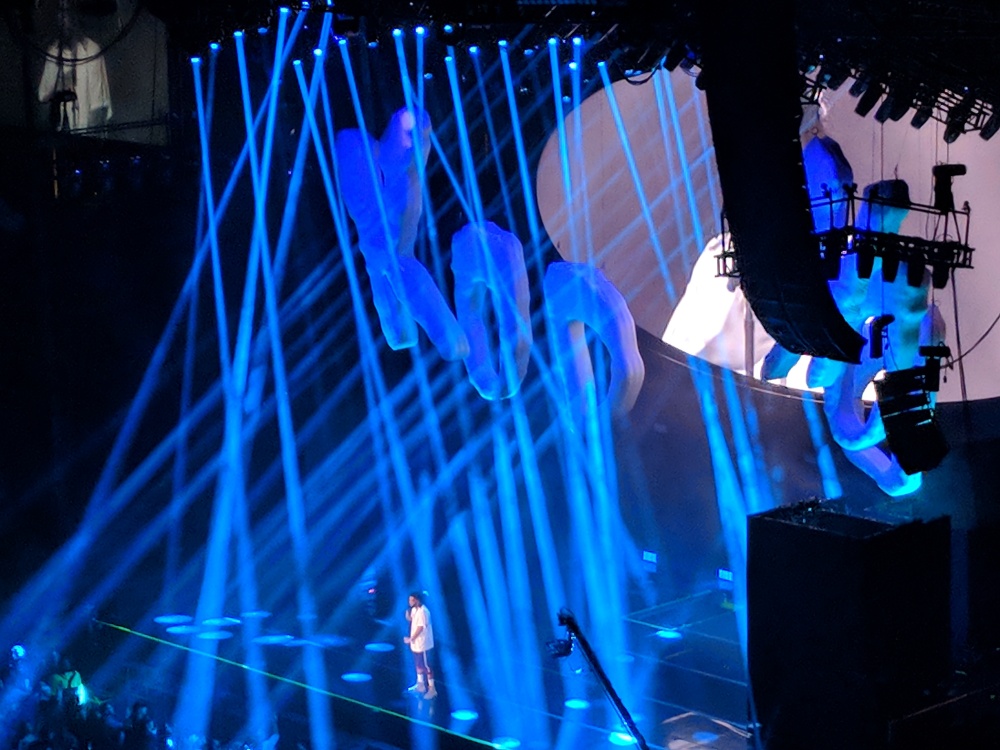 With “KOD” being that energizer at the start of the album, seeing Cole perform it live had the crowd as hyped as they had been all night! Of course he had to follow that up with an encore, and so Cole returned to the stage to perform the closing track to his new album, “1985.” Cutting the beat off early so he could spit it acapella, Cole really focused in on the lyrics to this song, which plays more like a big brother schooling than an actual diss record. The crowd rapped along with Cole, and he then ended the show with a bang, performing another 2014 track with “No Role Modelz” and getting the crowd to sing along to the chorus.

Overall, this was pretty much your standard stadium concert. You had the flashy lights, large screens, and cool stage design, but nothing was too extra, fitting Cole’s humble personality. All he really needs is the beat and a mic to connect with the crowd, and on stage that’s really all he used. He’s a master of talking through a situation to get the crowd into the right frame of mind to vibe to his songs, and is able to hit all the moods on his albums by doing that. He also kept things unpredictable by not completely sticking to KOD‘s tracklist, while still performing all but two songs off the new album. With a good balance between the new album and older classics, this was a fun celebration of J. Cole’s music, and fans can look forward to celebrating future albums with him soon.