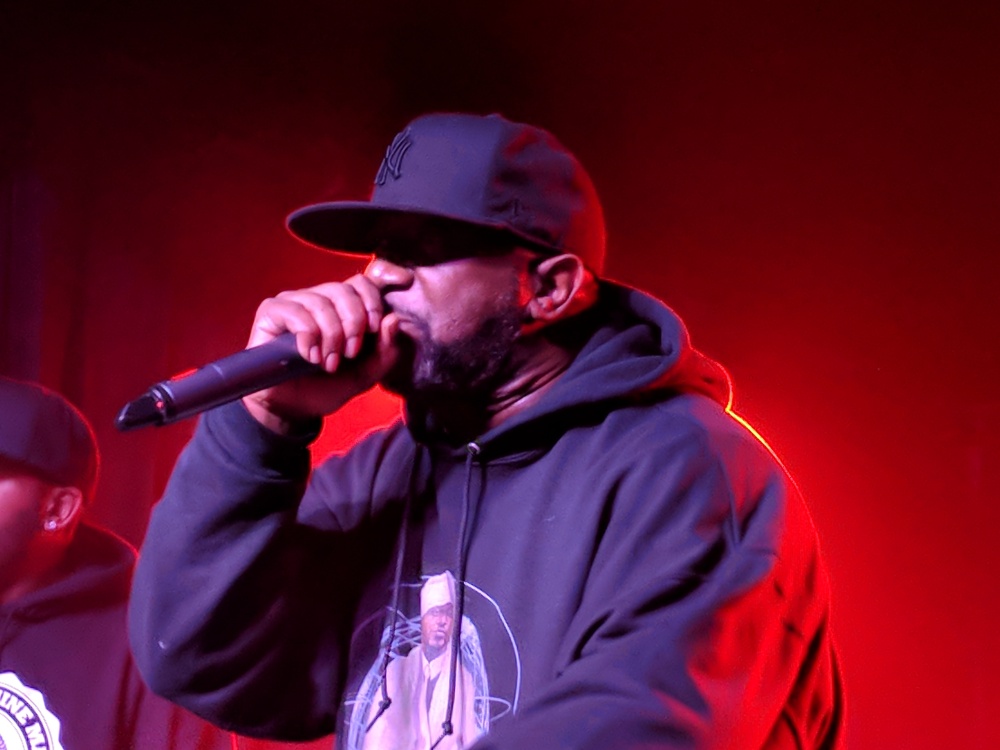 One of the most influential emcees in the history of Hip-Hop, Kool G Rap is a name often associated with words like authenticity, longevity, lyricism, greatness, and above all, respect. He’s often cited as an influence by some of the greatest lyricists the genre has seen, and is still releasing new music with over thirty years in the industry. Despite the accolades and acclaim that come with the name, G Rap has unapologetically kept it raw and underground throughout his career, never compromising his sound to make a pop hit, and very rarely going out on tour. He’s a studio emcee by nature, with his most recent releases being his 2017 Return Of The Don album, and 2018’s Son Of G Rap, where he seemingly passes the torch and lets 38 Spesh take on the majority of the vocals.

Now at the age of 50, Kool G Rap’s live performances are few and far between, and it’s a rare sight to see him rocking a mic outside of New York. We caught a glimpse of him as he made a surprise appearance at the 2016 Roots Picnic Festival in NYC, but have never had a chance to see him perform a full set. That is until now, as he would be performing his first ever concert in Canada, in Toronto no less, with this show at Revival Bar. Despite it being a weeknight, Hip-Hop heads in Toronto have been waiting decades for a chance to see G Rap perform live, and the bar got filled with fans who weren’t willing to pass up this rare opportunity.

Kool G Rap’s first concert in Toronto would be brought to us by Fun Up Entertainment, who have done an excellent job picking out some of the city’s best raw spitters to open at their previous shows (M.O.P., R.A. The Rugged Man, Apathy & Celph Titled to name a few). This show would be no different, as the lineup was stacked with some of Toronto’s dopest locals to open for G Rap. We showed up about an hour after doors had opened, and despite a long wait before we saw anyone hit the stage, things got off to a good start with London’s own Typo.

We had previously seen Typo put up some good competition at the Connect The Dot tournament last month, and he did more of the same with his performance at Revival, spitting perfectly in-pocket flows over boom-bap beats to get heads nodding. He brought out guest Casper Marcus during his set, and closed out with a rapid-fire freestyle over the new Eminem & Joyner Lucas single “Lucky You.” Following Typo would be another familiar face from Connect The Dot, Saipher Soze, who won the 2017 championship round in this very same building back in January. He’d perform the familiar “God Body” before bringing out guest Daniel Son to perform “Graveyard Shift” with him, along with some solo tracks.

Hosting throughout the night and keeping the crowd entertained between performers was of course Stacee Brizzle, who had a treat in store for the fans. As the First Lady of Reel Wolf Entertainment, who produce music videos and artist interviews, Stacee brought out the squad of emcees signed to their record label. Much like the underground music videos they produce, they brought a hardcore vibe to the stage, spitting vicious flows over thumping beats. To close out their set, they premiered a new track that featured Stacee herself spitting a rapid-fire verse to close it out.

Stacee would pass on her hosting duties to another Toronto favourite, JDon of Raw Dog Entertainment. JDon immediately threw out some free cannabis edibles into the crowd in celebration of the new marijuana legalization that just came into effect a day prior. He would perform a couple songs himself before bringing out Raw Dog artist Ruby Red, who got the crowd moving with some bouncy trap beats and rapid-fire flows. Just like all the emcees before him, Ruby Red nailed all his verses without any backup vocals, and he got the crowd extra engaged with all the edibles he tossed out.

The party kept rocking as Dre Specz took the stage, bringing back the boom-bap with some Wu-Tang flavour to his beats. Coming with sharp rhymes and smooth flows, Specz would keep heads nodding throughout his set, and closed out by premiering the first single off his upcoming Intellectual Violence EP, “Channel 24.” Stacee and JDon would then take time out to praise the organizer of the event, reminding everyone that this was G Rap’s first time in Canada, before bringing out another emcee who we’ve seen killing it at all of Fun Up Entertainment’s shows, Lyve Kaos.

With some raw, crisp vocals, boom-bap beats, and perfectly in-pocket flows, Lyve Kaos rocked the crowd with a solid set filled with certified head-nodders, and definitely deserved to be one of the last openers before G Rap hit the stage. There would be one final group to hit the stage first through, Toronto veterans Concrete Mob. Their set was short, as they had pre-recorded vocals drowning out their live vocals and clearly weren’t performing at the same caliber as the previous emcees to hit the stage. They would quickly make way for the man everyone came to see, Kool G Rap. 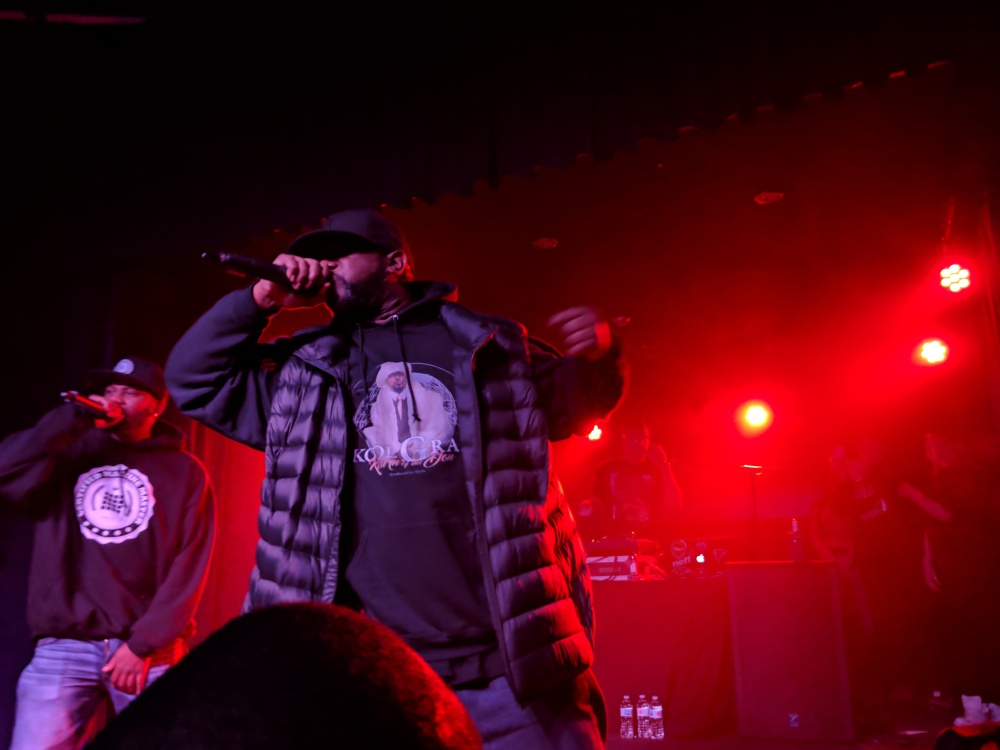 With one DJ and one hypeman with him, Kool G Rap graced the stage just after 1am and took it back to 1995, performing the title track off his 4,5,6 album, along with “Take ‘Em To War.” The crowd immediately got hyped and were chanting along to the hooks with him as he performed. Rocking a hoodie with the cover of his most recent solo album on it, Return Of The Don, Kool G Rap would next perform a song off that album with “Capitol Hill,” slicing through his verse. Before going any further, the Corona, Queens legend would pay tribute to other legendary emcees to come from his part of town, performing a cover of Mobb Deep’s “Give Up The Goods,” as well as Nas’ “Made You Look.”

Continuing on with his solo material, G Rap performed 2002’s “The Streets” before getting back to his 4,5,6 album with “Blowin’ Up In The World.” Not shying away from subtly reminding the fans of all the artists he’s influenced, the DJ played the Scarface sample used in Raekwon & Ghostface Killah’s “Criminology” before transitioning into G Rap’s collaboration with Nas, “Fast Life.” After ripping through his verse, G Rap moved back to his 2017 Return Of The Don album with a song that actually samples part of his “Fast Life” verse in the chorus, “Wise Guys.”

For his next segment, G Rap would get into some songs from the early part of his career when he was releasing albums with DJ Polo. The crowd got hyped and chanted along to the hook as he performed the 1992 classic “Ill Street Blues” before putting a twist on the predictable. The crowd had been shouting out song titles they wanted to hear all night, and one that G Rap actually performed was “Poison,” except rather than the original Marley Marl & DJ Polo production, he spit it over MF DOOM’s beat from “Yessir!.” With the way his voice has gotten deeper since he recorded the song in the late 1980’s, the DOOM production suited his flow nicely for this song, although he only did the first verse.

Performing at least one song from each of his DJ Polo albums, Kool G Rap next performed “Rikers Island” off the Wanted: Dead Or Alive album, followed by the groovy “Truly Yours” off 1989’s Road To The Riches. He would then perform his solo track “My Life” before doing one more tribute, this time to artists who came before him. He gave shoutouts to Kool Moe Dee and Melle Mel, and eventually winded up taking it back to 1981 with a tribute to Grandmaster Caz and the Cold Crush Brothers, covering one of their routines. With the clock approaching 2am, G Rap would then wrap up his set with one last song, the classic “Road To The Riches,” getting the crowd to jump.

Many fans stuck around for an encore performance, but there would be none. Instead, VIP ticket holders would line up for their meet & greet with G Rap backstage, while Stacee Brizzle would promote her upcoming all-lady Kitty Palace event with a beatboxed cypher at the edge of the stage.

Overall, it was a great experience seeing one of Hip-Hop’s all-time legends perform in an intimate setting where you could get up close to the stage. Staying true to form, Kool G Rap spit his verses raw and kept the crowd engaged as he rapped. There was a bit more to be desired, as there were plenty of songs left over that fans wanted to hear like “It’s A Demo,” “Kool Is Back,” and the second and third verses of “Poison.” It was still a satisfying 45-minute set though, as he touched on the majority of his albums and delivered the classics, with the crowd passionately rapping along to nearly every verse with him. This was a bucket list item checked off for the most passionate Hip-Hop heads, and a rare one for Canadians.