It’s always a good old-fashioned Hip-Hop party whenever The Beatnuts come to town. The Queens, New York duo of Psycho Les & Junkyard JuJu have been relatively quiet in terms of new music, but have been able to continue touring for years off of their six albums released between 1994 – 2004. Never falling into Pop trends, they’ve maintained an authentic Hip-Hop style and sound, and bring you back to that timeless era from the 90’s whenever they perform. For their return to Toronto, they would be headlining an intimate showcase at the cozy Hard Luck Bar.

The Beatnuts are celebrating their 25th anniversary in the music business, as their first singles and EP leading up to their debut album dropped in 1993. While their milestone hasn’t come with the same level of publicity as the Wu-Tang Clan’s 25th-anniversary tour, The Beatnuts are celebrating in true underground fashion with these small bar shows, where they’re able to interact more directly with the diehard fans. Their stop in Toronto would be brought to us by Landmine Entertainment, who as usual booked some of the GTA’s best local artists to warm up the stage.

After taking a while to find parking, we showed up over an hour after doors had opened, and Muskoka emcee Taktikz was just hitting the stage. We’ve seen him killing it at a bunch of shows recently (Connect The Dot, Apathy & Celph Titled), and he rocked the crowd once again with his sharp flows and booming beats. He got the crowd hyped with the usual selection of tracks he performs, like “Mindless Intelligence,” “Potsmoke & Paint Fumes,” and “Hunter Rapper,” but also did something different by bringing a few ladies on stage to dance as he rapped over a beat sampling swing music.

Next up would be a Toronto artist we hadn’t seen in a while (actually, since the last time we were here at Hard Luck back in February), Mohammad Ali. The Socialist Vocalist performed some of his politically-driven tracks like “Money, Power, Respect” and “We The People,” and got the crowd hyped with a remix over M.O.P.’s “Ante Up.” Joining him as his hypeman would be King Cole touching a stage for the first time ever, and Ali would wrap up his set with a quick acapella verse, getting the crowd to yell “fuck Donald Trump!”

There would be a long intermission before the next performers hit the stage, and this would give DJ Tanner some time to shine. Most DJs at these shows just do the job – play some songs that suit the crowd, but DJ Tanner got wild creative with his block of time. With a projector screen showing a mash-up of music videos to the songs he was playing, DJ Tanner had sped-up vocals from classics by Busta Rhymes, CL Smooth, KMD, and Big Daddy Kane playing over old school break loops, causing a breakdance cypher to open up in the crowd. The familiar raps drew the crowd in, but the way he flipped them over the breakbeats were something most hadn’t heard before. DJ Tanner continued to rock the crowd with new twists to songs by Nate Dogg, Biggie, and Mobb Deep before the next performers hit the stage.

Up next would be the guys who organized this show through Landmine Entertainment, Klee MaGoR & Big Stretch. They pumped up the crowd with some familiar routines, rapping over the beat from Wu-Tang’s “C.R.E.A.M.,” and performing their songs “Rap Titans” and “Hardcore Rap.” That latter track is a collaboration with Onyx, who will be returning to Toronto next month for a show at The Opera House.

There would be another long intermission where DJ Tanner would revert back to playing the classics as we knew them – Brand Nubian, Hieroglyphics, Black Sheep, and A Tribe Called Quest. Before bringing out the final opener, host DJ Chino would give up the mic to Stacee Brizzle, who would get a quick promo plug for her interview with The Beatnuts last time they were in town. They’d then bring out Toronto emcee Fortunato, who would run through a quick set with head-nodding beats and a dope acapella verse. It was almost 1am, and the crowd was ready to party with The Beatnuts. 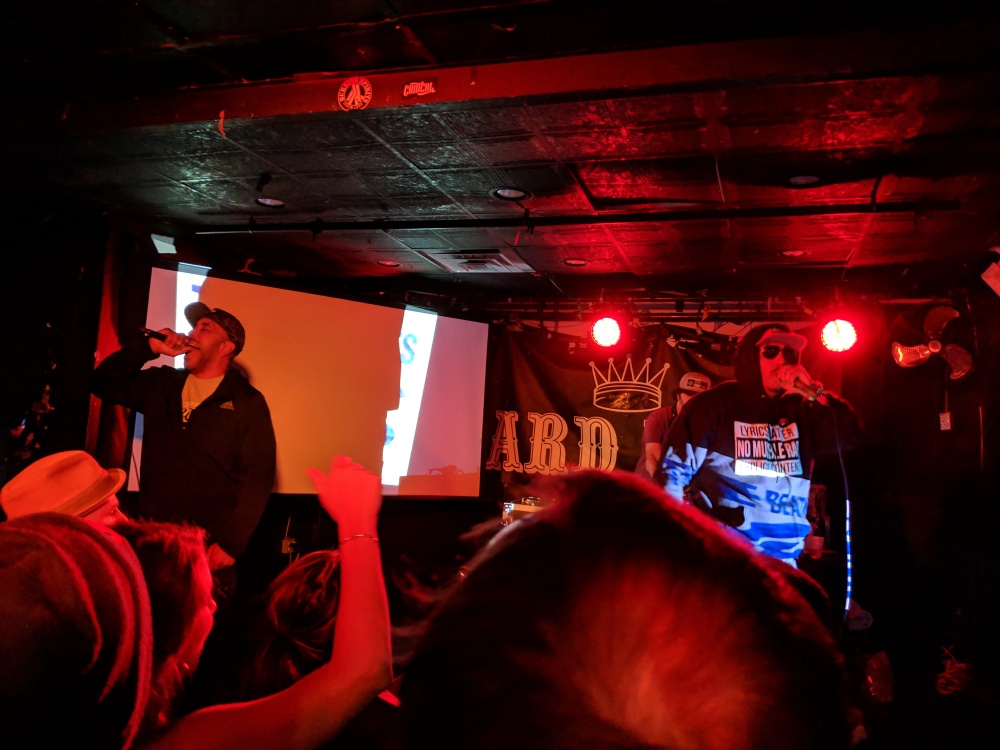 Not following the predictable, The Beatnuts started off with some songs from the tail end of their career, beginning the set with 2002’s “Originate” and 2004’s “Hot.” The crowd got hyped right away as The Beatnuts pumped that original Hip-Hop flavour into the room, with Psycho Les proudly rocking a shirt reading “Lyrics Matter – No Mumble Rap – Explicit Content,” and JuJu feeding off the energy from the crowd. They dipped into the 90’s with “Do You Believe?” before taking a minute to pause and acknowledge their 25-year anniversary.

With it being 25 years since the beginning, it’s only right that they took it back to that first EP from 1993, Intoxicated Demons. They performed the song “Psycho Dwarf,” getting the crowd to chant along to the chorus with them, and took it to ’97 with another familiar hook, “Find That.” The Beatnuts would hit you with dope beat after dope beat, performing rare cuts like DJ Babu’s “Duck Season,” and teasing the sample they flipped before performing the hit “No Escapin’ This.” 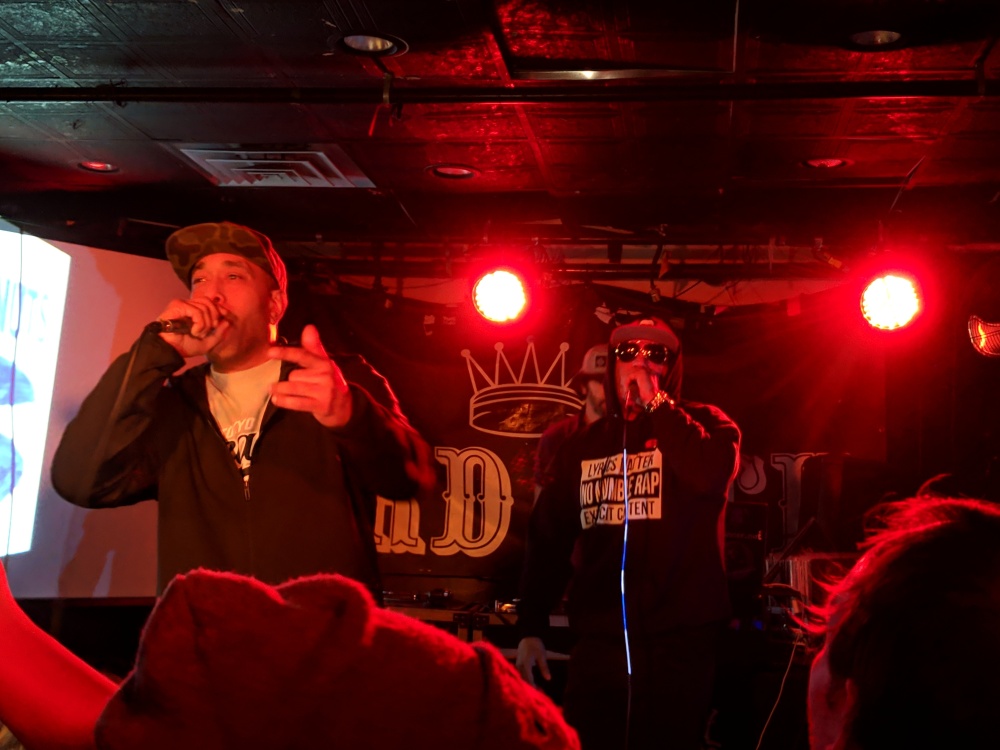 You never knew what The Beatnuts would hit you with next, as they went from 1994’s “Props Over Here” to 2001’s “Yo Yo Yo,” and even rapped in Spanish for “Se Acabo,” shouting out Method Man for making it a classic with his remix. They never stuck to one particular album for too long and continued to give the crowd tastes from all the different eras of their career. JuJu proclaimed it “a 90’s extravaganza!,” as no matter what year they dropped, The Beatnuts always captured that style and sound we associate with 90’s Hip-Hop. He would go on to passionately cover the late Big Pun’s verse on “Off The Books” as they performed the 1997 classic.

Les and JuJu were loving the vibe of the crowd, treating it like a house party and even taking fan requests. After rocking the hits “Let’s Git Doe” and “We Got The Funk,” they obliged a day-one fan who wanted to hear more of their Intoxicated Demons EP, and went on to rock the throwbacks “No Equal” and “Reign of the Tec.” They then went to their best-selling album, 1999’s A Musical Massacre, with the thumping “Beatnuts Forever.” Fans bought them shots, and they had some fun breaking out a zombie dance, and even remixed Bob Marley’s “Could You Be Loved” to sing “it’s The Beatnuts!!”

After rocking the stage for almost an hour and a half, The Beatnuts closed out their show with their biggest hit, “Watch Out Now,” and the crowd erupted one last time. Les & JuJu then took some time to hang by the stage and merch booth, taking pictures and signing autographs. Plenty of fans brought CDs and vinyls to get signed.

For Beatnuts fans, this was the ultimate celebration of their entire catalogue. The fans were hyped to see them, cranking up the energy every time they dropped a beat, and The Beatnuts gave that energy right back. The formula for The Beatnuts has always been simple: make dope beats that get your head nodding, and spit some fun raps that flow perfectly in-pocket. They executed this formula to perfection throughout the night, delivering a raw performance that got the crowd moving.

At one point it was the fans and DJ Tanner picking out the songs for them to perform, and Les & JuJu would go in no matter what was thrown at them – JuJu even freestyled when he couldn’t remember his verse to a deep album cut. As with most Hip-Hop shows at Hard Luck Bar, this definitely had the house party vibe JuJu talked about while on stage, and the packed house made for a fun party with The Beatnuts.