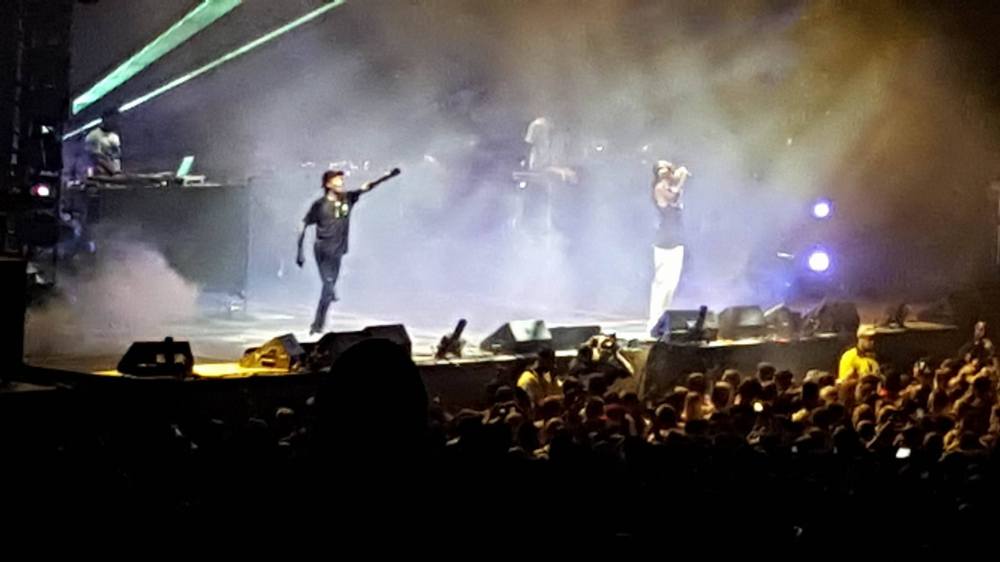 It finally happened.  It’s been no secret (based on some album reviews I’ve written) that I am not the biggest Drake fan, yet here I am attending one of his OVO events for the first time.  This came about at the last minute, as some homies encountered some cheap tickets for day one of the festival, which was being headlined by cultural icon Snoop Dogg along with Wiz Khalifa.  While there aren’t many artists on the bill that I’m a huge fan of, Snoop is one of those all-time greats that Hip-Hop heads should see at least once in their lifetime.

Drake has worked hard in promoting Toronto as a favoured tourist destination, and his annual OVO Festival plays a big part in his contributions to the city.  The festival typically takes place during Caribana weekend, with a major act (like OutKast or J. Cole in previous years) headlining the first night, and Drake himself headlining the second night with several surprise guests.  This year the festival has expanded over the entire long weekend, reaching multiple venues with Snoop Dogg & Wiz Khalifa co-headlining day one at Molson Amphitheatre, reggae star Machel Montano headlining day two at Echo Beach, and Drake & Future co-headlining back to back nights at the Air Canada Centre. 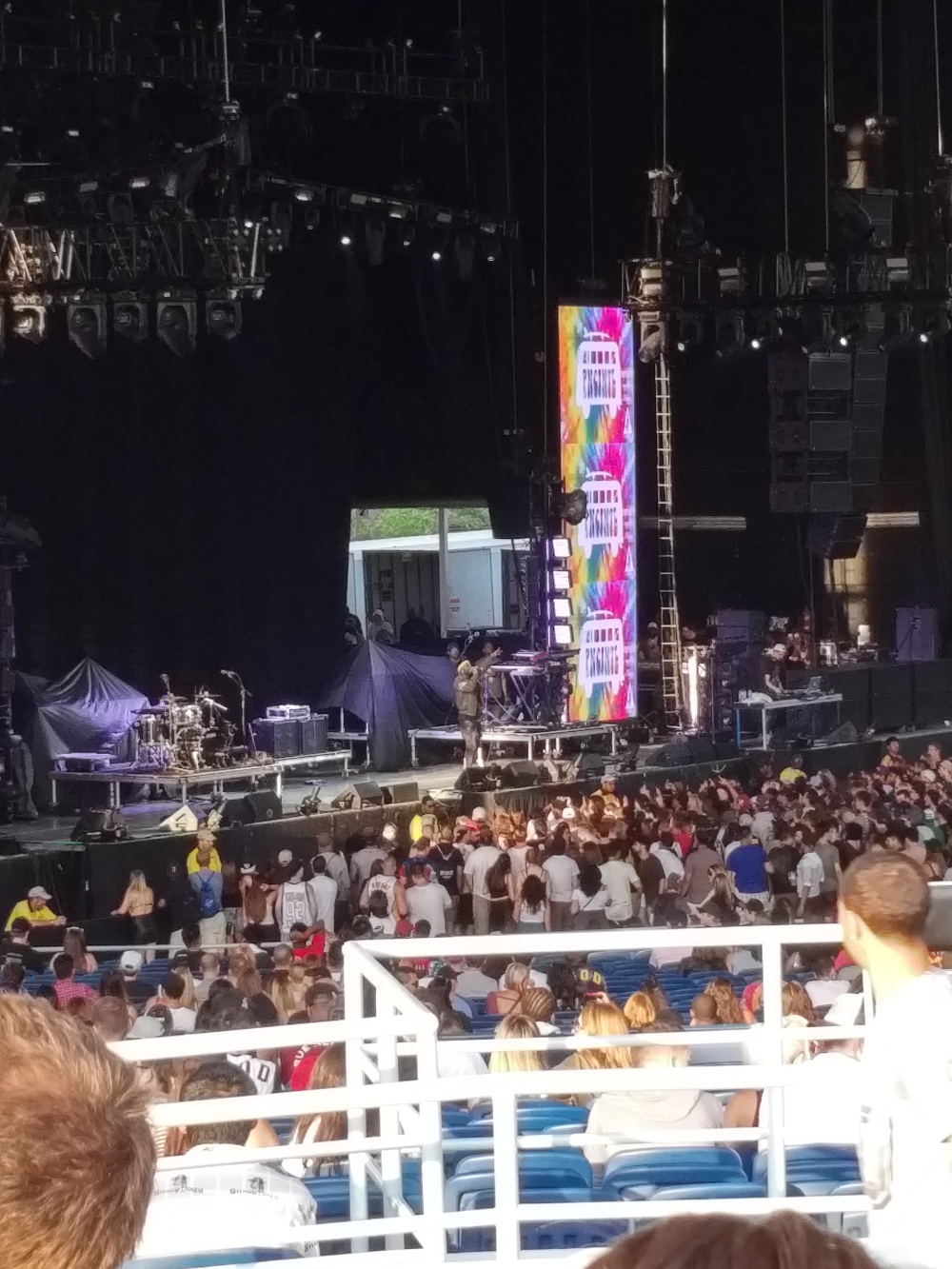 Shortly after my crew got to the venue, paid for some ridiculously overpriced beer and found our seats, Casey Veggies came out as the first opener.  I don’t really know much about him other than he was part of the Odd Future crew, but decided to go solo before Tyler The Creator, Earl Sweatshirt and Frank Ocean really blew the group up.  I didn’t know any of his songs, but he had good energy and the crowd (which wasn’t at full capacity yet) turned up for him. 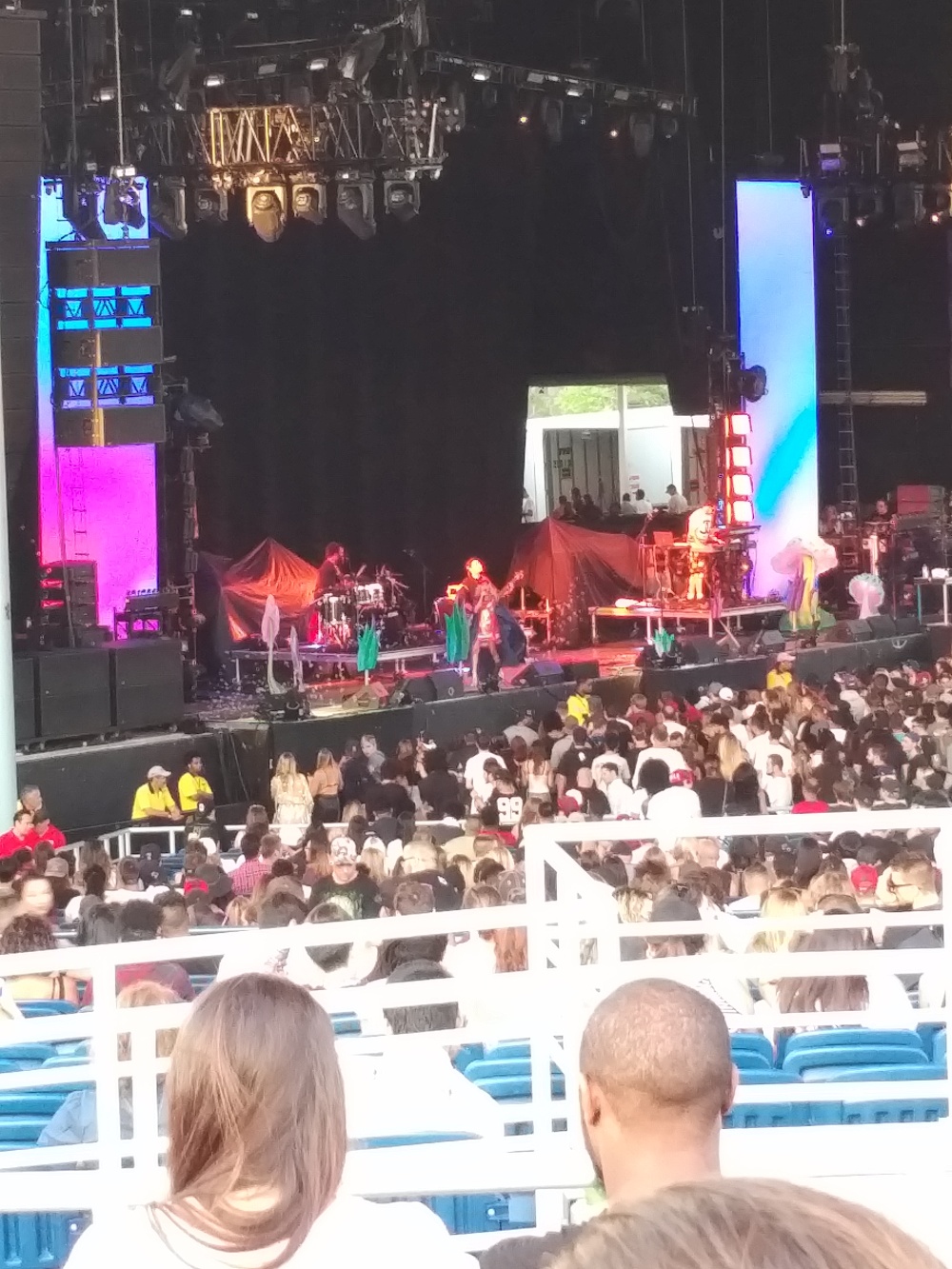 Next was the beautiful and talented Jhene Aiko, who had a live band rocking with her.  I had previously seen her perform at her very first show in Toronto, which was at the 2013 Manifesto Festival in Dundas Square, where she opened for Souls of Mischief.  She’s come a long way since then, releasing critically acclaimed albums and being nominated for Grammy awards.  She performed both old songs like “Higher” and “Bed Peace,” as well as some newer songs off her collaborative Twenty88 album with Big Sean.  She could have the crowd turned up with a hype track like “Post To Be” or mellowed out to smooth hits like “The Worst.”  Overall it was a dope set with good vibes, as that sweet voice reminded the crowd to stay high and hydrated on this hot sunny day before leaving.

Taking Jhene’s advice, I went to go get another drink after her set.  I returned to some wack trap-rap going on on stage, and angry fans yelling “fuck you!” whenever the rapper tried to engage the crowd.  Apparently Kevin Gates couldn’t make it across the Canadian border, so they got someone else to do covers of his songs for about ten minutes.  I wasn’t sure whether to be glad or upset; I had only ever heard Kevin Gates rap once and he drew zero interest from me.  On a positive note, the bullshit only lasted a few minutes, and Snoop Dogg came out on stage at 9 o’clock sharp. 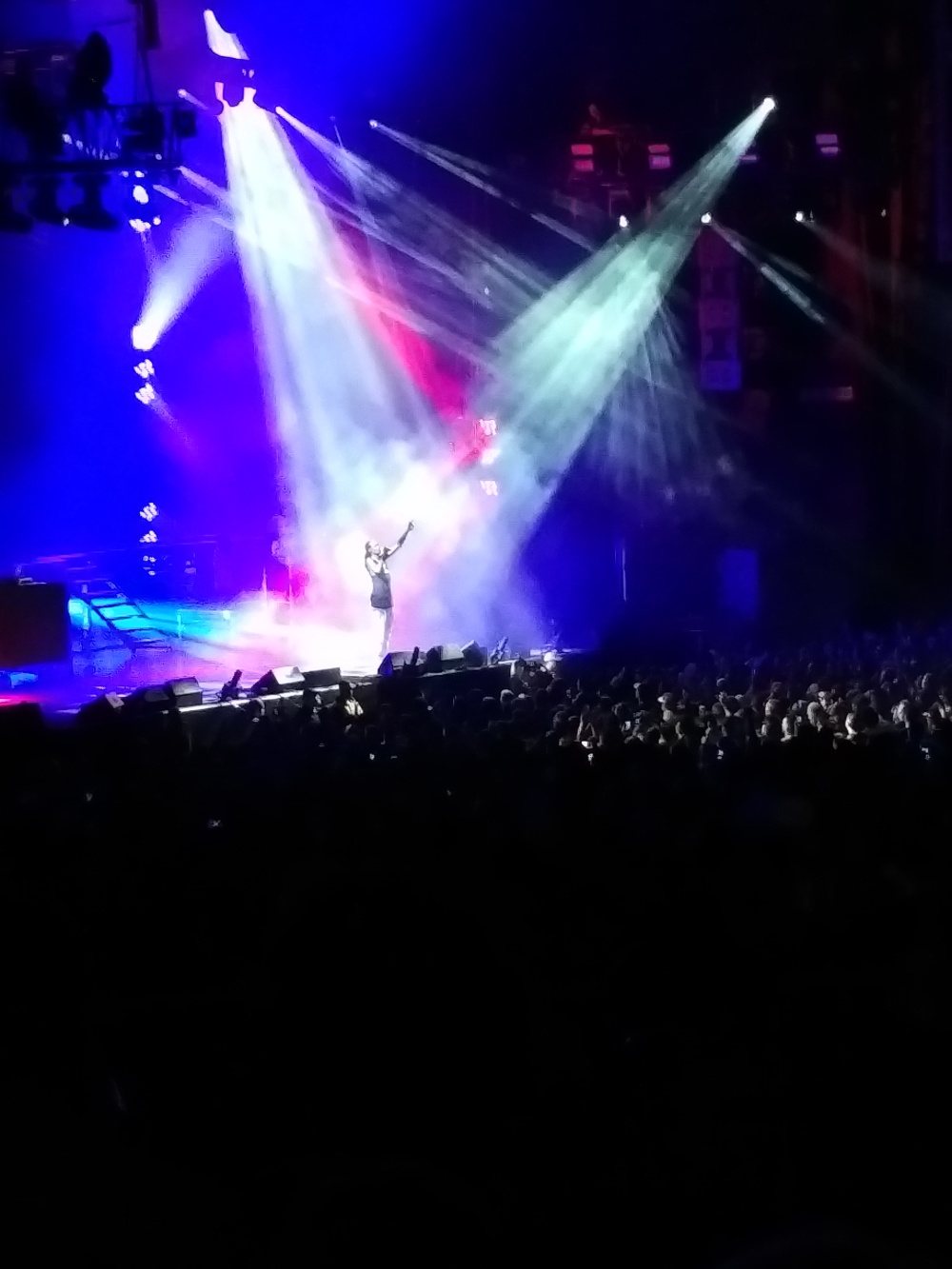 Snoop wasted no time getting the party rocking again, coming out to his classic Dr. Dre collaborations: “The Next Episode,” “Nuthin’ But A G Thang” and “Bitch Please.” After rocking the first three songs, he went backstage and Wiz Khalifa came out to do a few on his own.  Wiz is one of those rappers I’ve always found boring, with simple rhymes and mediocre flows, and so I don’t really know much of his music other than some obvious hits.  Out of his first few, I only recognized the “We The North” song the Toronto Raptors usually play during their pre-game warmups.  Just kidding, I know it’s called “We Dem Boyz,” haha. 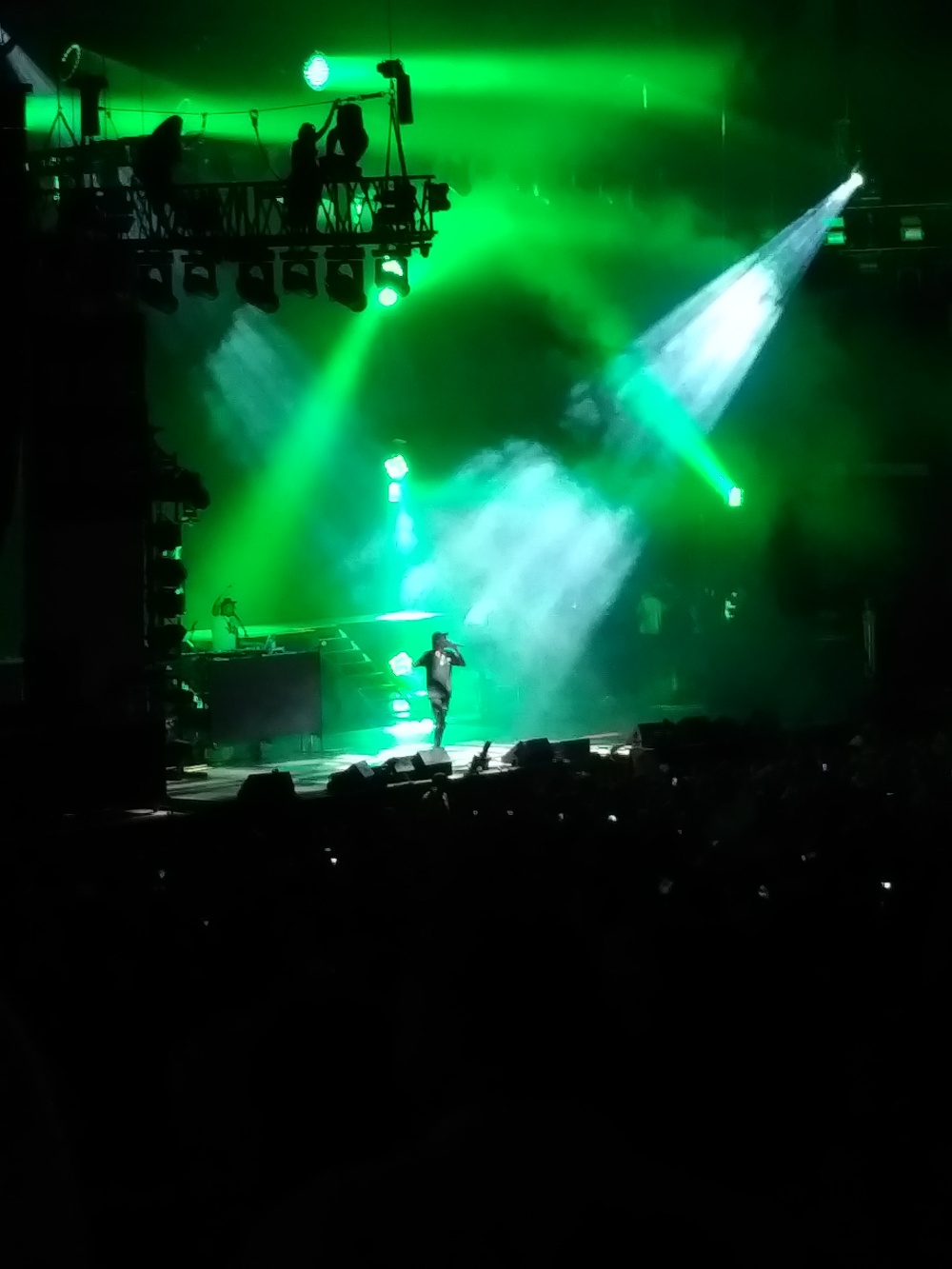 Snoop and Wiz took turns going through their hits.  Snoop came out and performed “I Wanna Rock,” then Wiz would do a couple songs, then Snoop came back with three more.  When Snoop came back out, he was atop the back balcony of the stage, where he performed his verse from “All I Do Is Win” before going back to the 1990’s with “Gin and Juice” and “2 Of Amerikaz Most Wanted.”  Wiz then came back with some more of his songs, including a throwback “Ink My Whole Body”, where he showed off his tattoos.

Next was a short break for an animated video of Snoop & Wiz driving around looking for weed.  When they reappeared, they were among the crowd wayyyy up between the 400-level and the lawn section.  They performed a couple songs up there, really engaging the people sitting far back before another video break gave them time to get back down to the stage.  Snoop made a comment that he wanted to “hear some gang shit,” so then Wiz brought out his Taylor Gang and they performed some of their songs.  There was also a surprise appearance from Ty Dolla $ign, who I am not a fan of at all, so I took the time to get more drinks.

Wiz Khalifa followed up with some of his most recognizable hits, including “Black & Yellow” and the Furious 7 smash “See You Again”, getting everyone to light up their phones and lighters during the latter emotional track.  Snoop and Wiz then ended the show with some of their collaborative tracks including “No Social Media”, and got everyone to sing along to “Young, Wild & Free.”

Overall this was a fun show, although the obvious unfamiliarity and lack of preparation on my part made it a challenge to vibe with all the songs.  I noticed some of the older folks in the crowd took a seat whenever Wiz Khalifa took over the stage, and only got up for Snoop Dogg.  Otherwise, the crowd was mostly young people turning up and the energy was great.  Say what you will about the musical experimentations Snoop has done over the years, but he still has his mic mastery on full display whenever he spits a verse, and he knows how to keep a crowd engaged.  That’s another legend scratched off the bucket list.

Drake was nowhere to be seen during day one of the OVO Festival, although there was an OVO pop up shop with merch for sale at the Molson Amphitheatre.  It might also be worth noting there’s now a Pokemon Go gym around the vendor area too.  While previous years had the entire festival at this venue, OVO is moving on with a reggae/soca show at Echo Beach on Saturday, and Drake & Future hosting back to back nights at the Air Canada Centre on Sunday and Monday.