Snoop Dogg has evolved and reinvented his style several times over the years. He’s occasionally delved into reggae, funk, and most recently released a gospel album, but he’ll always be known for his contributions to Hip-Hop. Even within Hip-Hop, he has updated his style with every album and has lasted long enough to even revisit his older styles of rap decades later, on his own terms. With 16 solo albums released over 25 years, giving him a long string of hit songs and party anthems in each decade since the 90’s, Snoop has had a legendary career. Although he has so many years of hits to cover, going into this we were expecting a strong focus on that 1993 Doggystyle album that started it all.

Showing up to Rebel Nightclub about an hour after doors had opened, we caught our favourite host Stacee Brizzle tossing out CDs and t-shirts to the crowd. This was the last we’d see of her though, as once the show got started, things moved pretty quickly. To warm up the stage, DJ Young Legend would bring out Peter Jackson, an artist who’s always been involved in bringing big name artists up to Canada.

Similar to when we saw him at the Wu-Tang Clan 25th anniversary concert last fall, Peter Jackson had a short but solid setlist to warm up the crowd, except this time he had a few special guests with him. He brought out Ottawa singer Chrissy Spratt, who displayed some killer vocals as she sang the hook on their song together, “Vacation.” He would also bring out Toronto artist Top 5 to perform a track before leaving the stage.

Given how most Hip-Hop shows usually go, we were expecting a long wait before the headliner showed up, but to everyone’s surprise, Snoop came out promptly at 9:45 to get the party going!

The cheers erupted as Snoop Dogg walked on stage decked out in a Toronto Raptors jacket over a Kawhi Leonard jersey; this Victoria Day Monday being the rest day between Game 3 and Game 4 of the Eastern Conference Finals. Snoop got the crowd chanting his name for the first song, and pulled out a deep Doggystyle album cut early with “Tha Shiznit.” Contrary to the endless throwbacks we expected though, Snoop’s next few songs would all be more modern guest appearances he’s made on other artists’ songs, including DJ Khaled’s “All I Do Is Win,” 50 Cent’s “P.I.M.P. Remix,” Lil Duval’s “Smile (Living My Best Life),” and Wiz Khalifa’s “You and Your Friends.” The crowd knew some songs better than others when singing along to the catchy choruses with Snoop, and we all rocked with him as he nailed all of his verses.

On the note of “You and Your Friends,” Snoop decided to bring out one of his own friends on stage, Warren G, who would perform “This D.J.” as Snoop lit up a joint and smoked next to him on stage. With smoking now allowed inside Rebel, there were plenty of weed clouds filling the room by this point. Joined by a dog mascot on stage to engage the crowd, Snoop and Warren G would perform another Regulate…G Funk Era track with “Do You See” before getting into a segment of Snoop’s Dr. Dre collaborations.

The crowd erupted as the beat dropped for “The Next Episode,” and everyone hit the timing perfectly to sing along to the late Nate Dogg’s closing verse, lighting up to the lyrics “smoke weed everyday!”. Snoop would keep the crowd grooving with more of his classic Dre collabs like “Nuthin’ But a G Thang” and “Bitch Please” before moving on through the years. Taking it to the early 2000’s, Snoop pulled out a rare R&G (Rhythm & Gangsta) track with “Signs” followed by a Nate Dogg and 213 tribute, bringing Warren G back out to perform “So Fly.” Keeping with the same era, Snoop closed out this mid-2000’s segment with a lady-pleaser, bringing out some pole dancers as he performed “I Wanna Fuck You,” with the crowd singing along to the Akon chorus.

Next would be a pause as Snoop took some time out to pay tribute to the late Nipsey Hussle. The crowd lit up their phones and lighters in a moment of silence as a montage of photos of Nipsey played on the screens. When the video clip ended, Snoop & Warren G brightened the mood up again with a more joyful throwback from 1993, performing the groovy “Ain’t No Fun” by singing along to Nate Dogg’s vocals before each nailing their verses. It was slated that Tha Dogg Pound was supposed to be joining Snoop on this tour, but they were nowhere to be seen as Snoop covered Kurupt’s verse on the song. Warren G would get to perform another song with “I Want It All,” and the ladies would join them on stage again to dance as Snoop performed the No Limit throwback “Loosen’ Control.”

Snoop Dogg would take it back to one of his earliest singles, “Gin & Juice,” nailing the timing of his flow to perfection as the crowd grooved to the timeless classic. He would then get into another segment paying tribute to his fallen peers, getting the crowd to rap along to Eazy-E’s “Boyz-n-the Hood” and Biggie’s “Hypnotize” before actually performing his 2Pac collaboration, “2 of Amerikaz Most Wanted.” After getting the crowd to dance to these classics, Snoop yelled out for Warren G to “regulate this shit!,” and of course Warren G came out to perform his biggest hit single, “Regulate.” Serving as yet another tribute to the late Nate Dogg, the crowd sang along to Nate’s vocals as Warren G spit his verses to the song.

With the vibe now mellowed out, Snoop’s DJ played the House of Pain classic “Jump Around,” with the lighting in the center of the club lowering down so fans could try to actually jump to touch it. The rings of lights moved along as the crowd got pumped up to the track, and after getting the crowd to jump, Snoop then brought the dance vibes back and got us to “Drop It Like It’s Hot.” He would then get the crowd to cheer as loud as they had all night by dropping the beat for his very first single off of Doggystyle, “Who Am I (What’s My Name?).” This had to be the song of the night, as the crowd was on 100 with their energy, nailing all the chants and singing along to the classic vocals on the track. 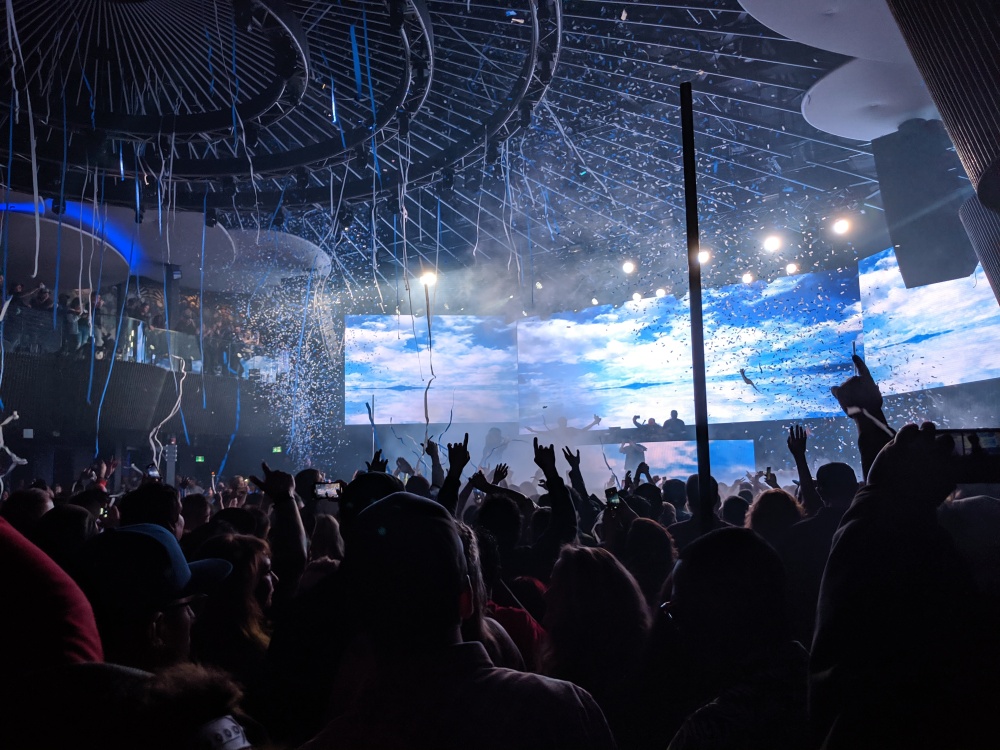 To close out his set, Snoop Dogg would perform the same song he used to finish the last concert he had in Toronto (2016 OVO Fest), “Young, Wild & Free,” although without Wiz Khalifa. It was a more mellow performance of the song, as clouds of smoke covered the stage and Snoop sang the chorus softly while smoking a joint. Then, with perfect execution, Snoop gave a salute to the crowd as confetti shot out from all around the main bowl of the club, and he would humbly thank the crowd as the confetti continued to rain down. While he did rock the stage for over an hour, Snoop ended the show a lot earlier than expected, as we were out the doors by 11pm.

With only 4 of the 19 tracks performed, this wasn’t exactly the Doggystyle tribute we were expecting, but it was still a really fun time going through the years and years of classic Snoop Dogg hits. He executed his setlist brilliantly, with each segment of songs having its own theme. It was also cool how his set utilized the relatively more modern Rebel Nightclub to the fullest, with the club lighting, confetti shooters, jumbo screens and stripper poles. Snoop at one point asked the crowd how many people had him on their bucket list, and his show proved to be exactly that kind of performance – one that’s sure to satisfy bucket lists regardless of which songs he pulled from his extensive catalogue. He may not have done every song expected, but he showed you why he’s been able to remain an icon over 25 years.