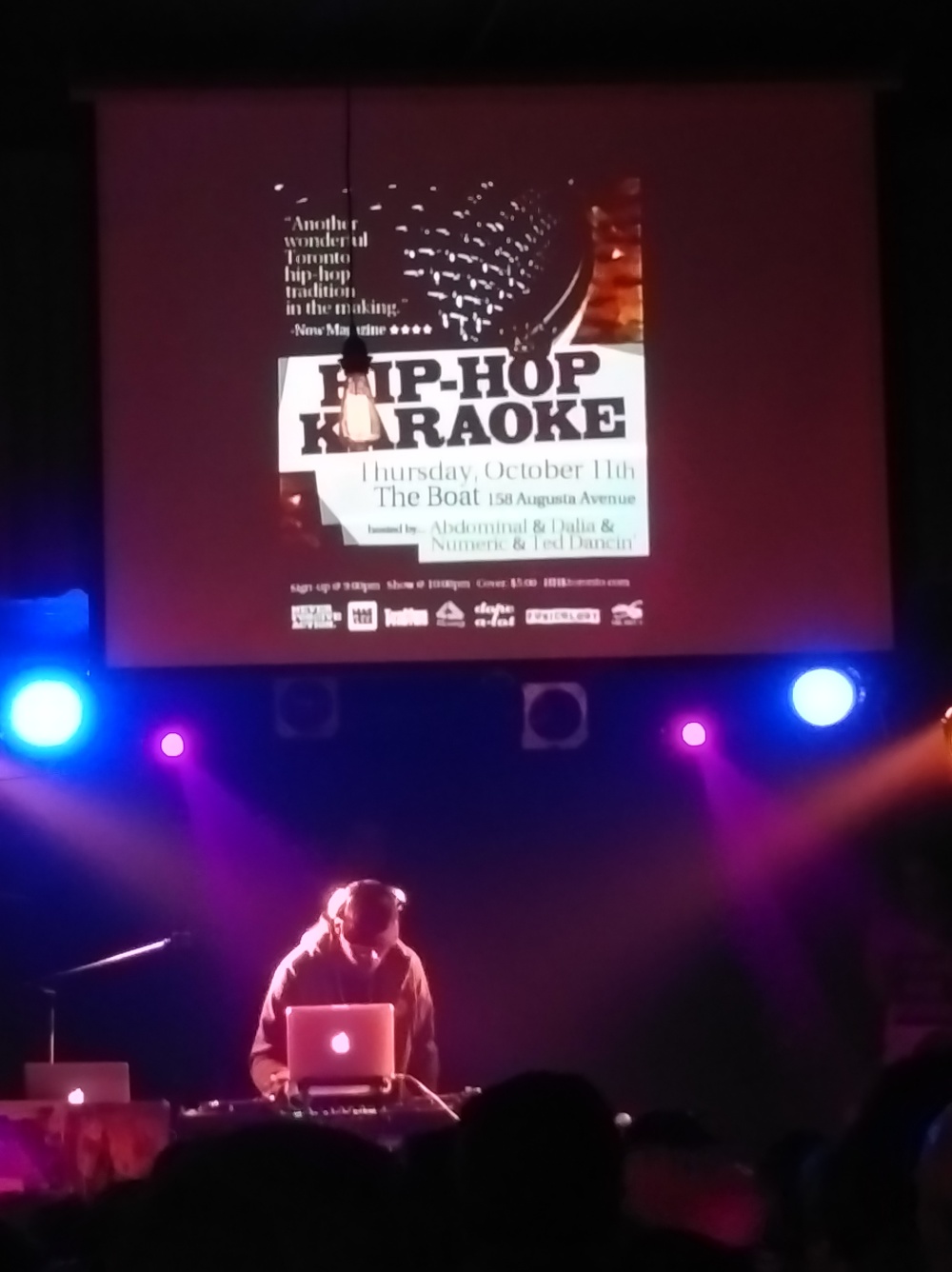 For the past ten years, Hip-Hop Karaoke (or HHK for short) has been a staple in Toronto’s Hip-Hop scene, throwing a party on the third Friday of every month and letting fans of all generations jam to their favourite Hip-Hop songs from all eras.  Having originated in New York City before having chapters spread throughout the continent, the Toronto edition has put on some fun monthly parties and also brought some great artists to the city for their anniversary shows, last year having Del The Funky Homosapien perform for the ninth anniversary.  This event would be both a joyous and sad occasion, as HHK is celebrating ten years in Toronto, but also marking the final event in their monthly series.  Having only discovered them last year, it feels like it’s ending too soon.

MC Abdominal, who’s been hosting Toronto’s HHK since Year One, was kind enough to chop it up with us in the weeks leading up to the show, and gave us some insight on the decision to stop the monthly HHK events after ten years.  It turns out for the three people involved (More or Les, DJ Ted Dancin’ and himself), maintaining the monthly format is a lot of work for little pay, considering they all have other full-time gigs to manage.  He did however hint that rather than end Toronto’s HHK completely, they may just reduce it to a quarterly or semi-annual event.  Abdominal himself actually has a new album with DJ Format dropping in April called Still Hungry, and already has plans for a tour in the UK & Europe (Canada possibly in the summer).  Fittingly enough, the first single is all about how much work an independent artist needs to put into their business:

Although some legendary artists like Maestro Fresh Wes and Phife Dawg (R.I.P.) have blessed the HHK stage in the past, Abdominal says that “the passion [HHK’s] regular karaokers brought to the stage each and every month was the lifeblood of the night,” and that he’ll remember them the most.  As such, the tenth anniversary is being headlined not by an MC, but by legendary DJ/Producer Pete Rock, allowing the fans to keep the spotlight behind the mic.  Fun fact: Pete Rock also performed at the New York HHK event that sparked the idea to bring HHK to Toronto ten years ago. 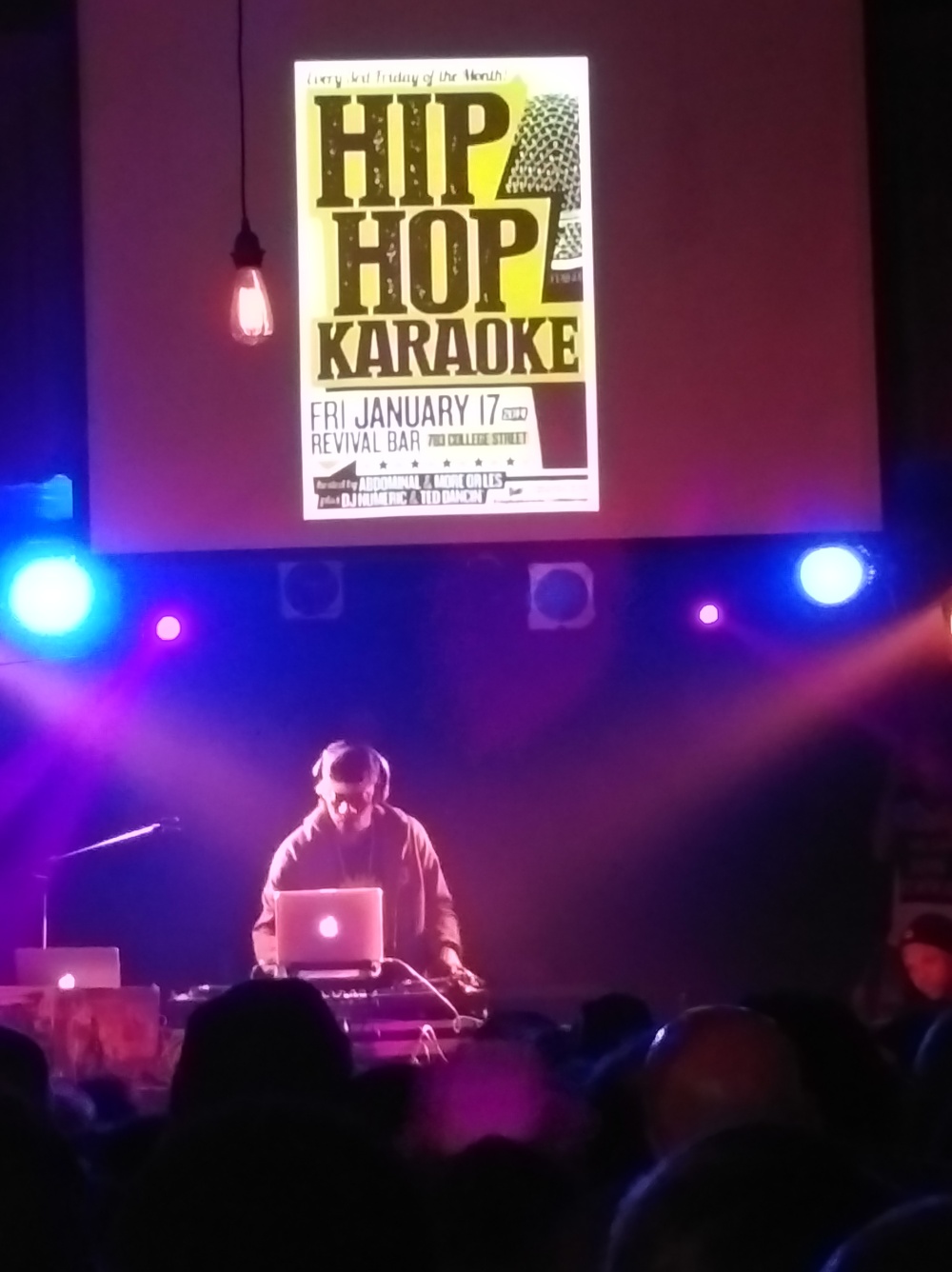 I hadn’t been back to Revival Bar since the ninth HHK anniversary last year (although I checked out HHK’s one-off stint at Miss Thing’s last fall), and I completely underestimated how large the crowd would be.  I got there around 10:30 to take advantage of the cheaper cover before 11pm, but the line stretched around the block and it took almost an hour to get inside.  Once in the building though, the vibes were good with classic 1990’s hip-hop blasting throughout the club, and flyers of past HHK events being shown on the projector screen to bring back memories.  The karaoke had already started by the time I got inside; one of the regulars had just crushed her set and was literally being handed a trophy, which was a step up from the usual Dollarama gifts Abdominal gives out to all participants.

Over the past decade, HHK has built an atmosphere that feels almost like a family gathering for the regulars.  The hosts Abdominal and More Or Les already knew most of the karaokers, and this particular show had nothing but the best ones rocking the stage.  No one needed to use the lyric sheets (which HHK is happy to provide), and everyone crushed their sets with raw passion for the songs.  One dude slayed both Dr. Dre and Eminem’s verses on “Forgot About Dre,” and another did both Killer Mike and El-P’s verses on “Run The Jewels” – who are actually in town performing this Sunday (read the review here)!

The ladies especially did their thing, as one co-ed duo rocked Ice Cube and Dr. Dre’s “Natural Born Killaz,” and another traded verses on “Hit Em High (The Monstars’ Anthem)” from the Space Jam soundtrack.  A girl from the UK covered “Run This Town,” effortlessly switching between Rihanna’s sung vocals and Jay-Z & Kanye West’s verses, and getting the crowd to sing along with her.  My favourite highlight of the night though had to be these two white girls going back and forth on Biggie’s “Gimme The Loot,” nailing every word and making appropriate substitutions for the N-word (which is banned for all performers).

The karaokers kept things in the 90’s for the most part, with fun performances of Method Man & Redman’s “Da Rockwilder” and Mobb Deep’s “Survival of the Fittest,” although there was a cool but obscure pick with Eminem’s “Despicable” freestyle over beats from Drake’s “Over” and Lloyd Banks’ “Beamer, Benz or Bentley.”  It wouldn’t be a Hip-Hop Karaoke night however if the entire crowd didn’t rap along to the most popular rap song ever made – the theme song to The Fresh Prince of Bel Air.  After one last karaoke performance of Digital Underground’s “The Humpty Dance,” it was time for the headliner himself, Pete Rock. 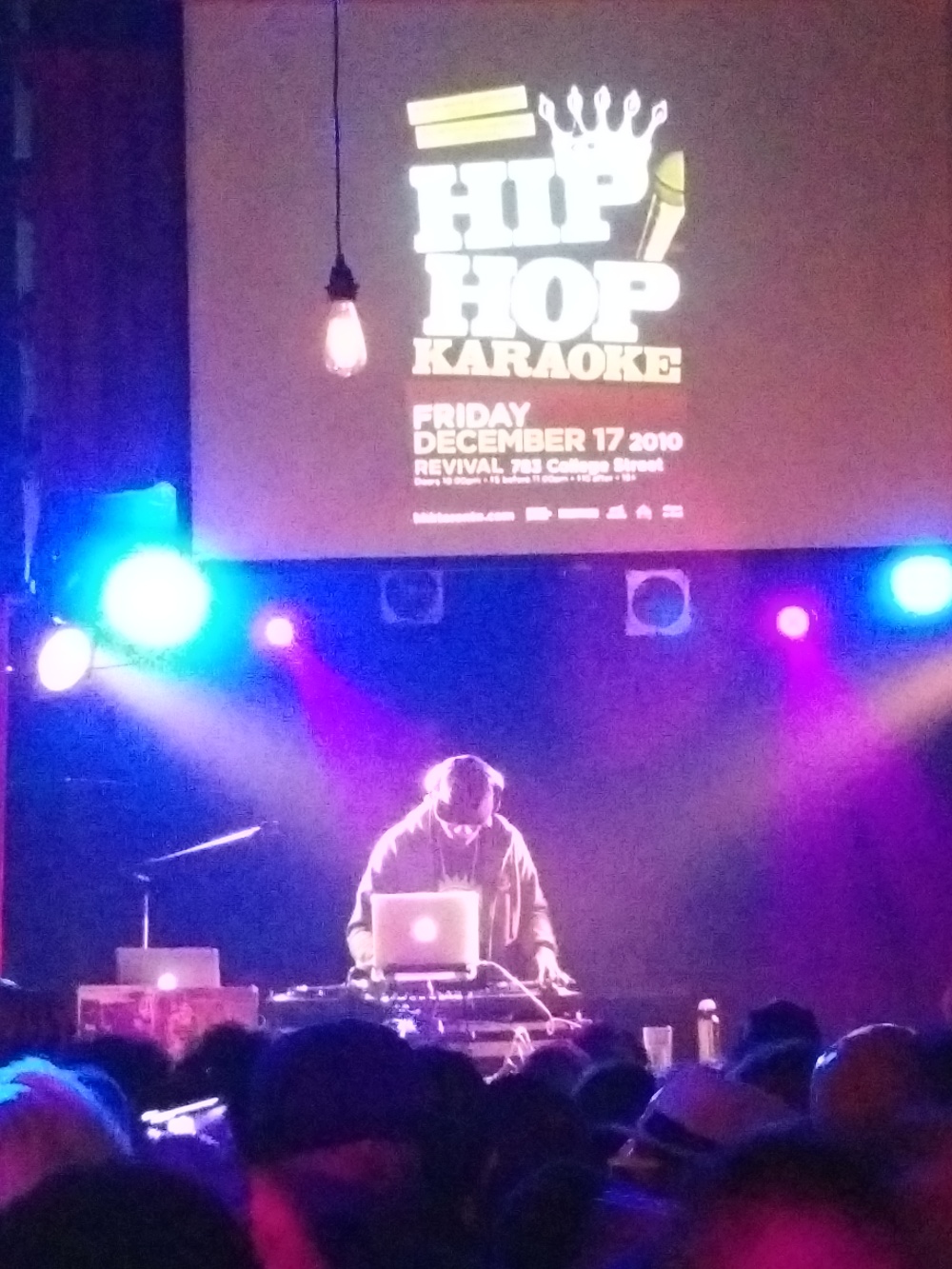 When Pete Rock got behind the turntables, the night turned into a 90’s Hip-Hop party.  He would tease the samples used to make classic rap songs, then would play the rap song itself, starting by transitioning Michael Jackson’s “Human Nature” into Nas’ “It Ain’t Hard To Tell.”  He kept going through about half of Nas’ Illmatic album, digging into the samples used for “Memory Lane,” “Life’s A Bitch,” “N.Y. State of Mind,” and of course the song off that album he produced himself, “The World Is Yours.”

After rocking straight Nas songs, he moved into a Mobb Deep segment, playing several of their hits including “Give Up The Goods” and “Shook Ones Pt. II,” with the crowd rapping along.  He then got into a west-coast vibe, playing classics by Dr. Dre, Snoop Dogg, Tha Dogg Pound, and of course the late 2Pac. Next, he moved back to the east-coast, diving deep into the Wu-Tang Clan’s catalogue, as well as several classics by A Tribe Called Quest.  The closest he got to playing anything after the 90’s was M.O.P.’s “Ante Up,” which got everyone in the building turned up.  Choosing Pete Rock as the final anniversary headliner was a great choice, as he definitely fit the vibe of the HHK crowd.

Toronto’s Hip-Hop Karaoke went out with a bang.  Host More Or Les stressed earlier in the night that it’s events like this that prove Hip-Hop is all about fun, positive vibes, and sometimes even romance; and I’d tend to agree.  The two simple rules of no freestyling and no use of the N-word have helped keep everything positive at HHK for ten years, and  of course the pure love fans have for Hip-Hop.  The tenth anniversary event did have some problems like the long wait to get inside, and the building being too packed to really move around much, but these are good problems to have and show that there is a high demand for HHK in Toronto.  The monthly presence of HHK Toronto will definitely be missed, but the fewer shows going forward could make each event that much more special.