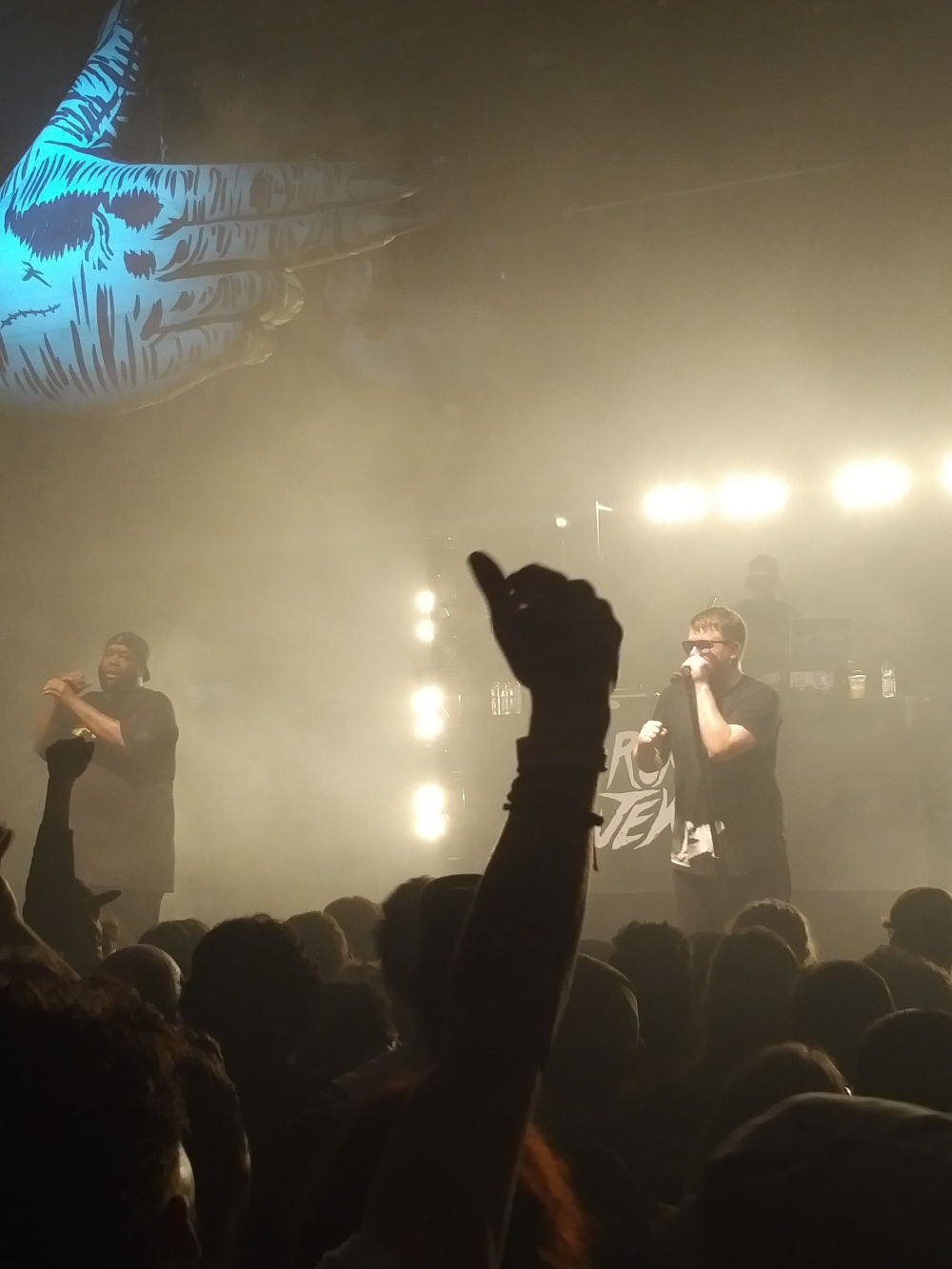 Coming off of what I’m now comfortable calling the best rap album of this decade with RTJ2, Run The Jewels have returned with another very, very, very great album with RTJ3, which they themselves leaked early this past Christmas.  A lot of fans are even calling the new album their best work, although it’s only been out for a couple months.  With the track record that these guys have, it’s no surprise that this show at the Danforth Music Hall was sold out months in advance, with second-hand tickets going for around triple the face value.  If you were able to get into this show at a reasonable price, you were extremely lucky.

Ever since they formed the group Run The Jewels, Killer Mike and El-P have had a beautiful history performing in Toronto.  They’ve gone from performing at the tiny Hoxton nightclub in 2013 to headlining Time Festival last summer, to now having their shows completely sold out within hours of going on sale.  They sold out the Danforth Music Hall in 2014 too, and caught a last minute flight just for Toronto after their tour bus literally caught on fire.  In 2017, everything seems to be going their way, as they have the most well-received album this year and are on the hottest tour in Hip-Hop.  Not to mention they might even have the flyest merch of any Hip-Hop group right now.

It’s been almost a year since I’ve been to the Danforth, and my favourite Toronto venue hasn’t changed much. The merch booth by the entrance was full of RTJ gear, as well as merch for the openers Gaslamp Killer, Nick Hook and Gangsta Boo. By the time I got inside, the Memphis emcee Gangsta Boo of Three 6 Mafia was already on stage.

I’m not too familiar with her music, or much of Three 6 Mafia’s older work, but she had that dope southern bounce to her style of Hip-Hop. Unlike a lot of rappers that make club music, she had a traditional (read: skilled) approach to emceeing and spit every word of every verse, and she killed it!  One song I did recognize was her feature on Yelawolf’s “Throw It Up,” during which she let Eminem’s verse play after hers just to let everyone know she has a track with the legend. She rocked a dope half-hour set, then made way for her DJ, Nick Hook, to have some fun with the crowd.

Nick Hook came out from behind the turntables and checked to see if there were any aspiring producers in the crowd. He picked out two volunteers to come on stage and create a beat with him, as he explained that he did some engineering work on Run The Jewels’ first album. The two volunteers made a messy sounding beat, until Nick threw on some unreleased material from El-P and Zach De La Rocha over it. Everyone had fun, and the two volunteers got to crowd surf their way back into the pit as Nick played some Meow The Jewels material he worked on.

As Nick was spinning some tracks, the final opener made his way behind the DJ booth to set up his equipment. I had never heard of The Gaslamp Killer before, but he had some dope EDM remixes of popular Hip-Hop tracks. The Los Angeles DJ also had a lot of Middle Eastern flavour in his EDM, to which he explained that his grandparents were from Syria and had to deal with similar issues President Trump is currently putting people through. Between some cool video game samples used to remix classic Hip-Hop songs, he very much promoted peace and positivity. He also spoke on how he’s been listening to El-P for almost twenty years, and the beauty of seeing the growth him and Killer Mike have gone through as artists. 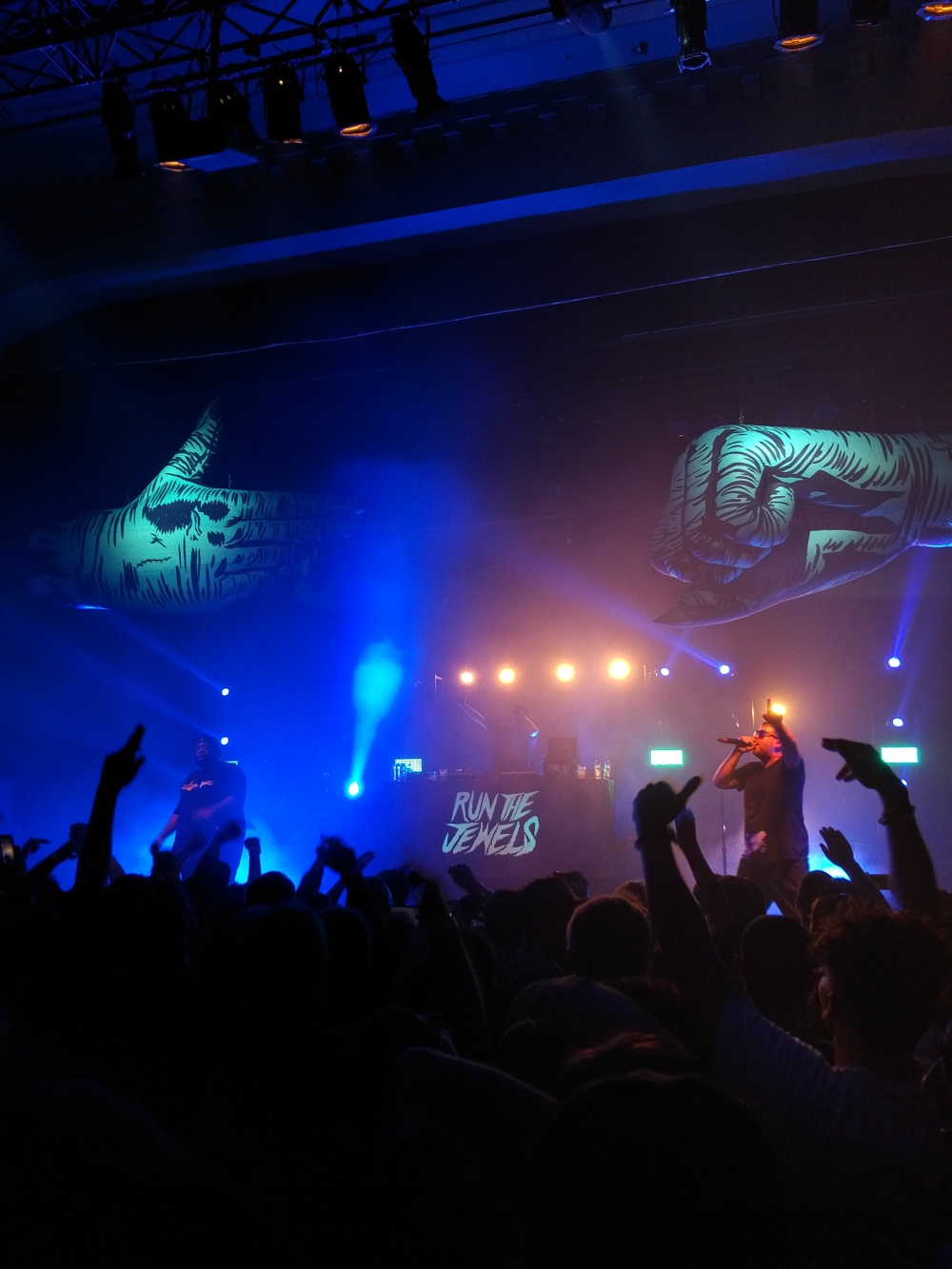 There was a bit of a wait as equipment was set up for Run The Jewels’ headlining set. The huge inflatable hands from their logo were hanging from the rafters, and they had an expensive looking set of lights on stage behind the DJ booth. After a few loud “RTJ!” chants, DJ Trackstar got behind the turntables and proceeded to play the same song Run The Jewels have been coming out to at their shows for the past few years, Queen’s “We Are The Champions.”  This was the last familiar routine for fans who’ve been to previous shows, as Mike and El-P greeted the crowd and dove right into the new material off RTJ3.

The crowd clapped to the beat of the single “Talk To Me” as the energy built up, and a full on mosh pit broke out once the beat dropped mid way through Killer Mike’s opening verse. The explosion of energy continued as the crowd jumped, clapped and shoved each other while Mike and El-P continued with the new songs “Legend Has It” and “Call Ticketron.”  Mike and El-P kept slaying their verses, going back to some RTJ2 tracks with “Oh My Darling Don’t Cry” and “Blockbuster Night Pt. 1,” and the light show going on behind them made these familiar tracks all much more energetic.

After five straight high-energy, chaotic mosh pit tracks, they moved to a slower tempo with their collaboration with DJ Shadow, “Nobody Speak.”  The steady head-nodder was a fun jam to mellow out to, but things would get hectic again soon, as Mike and El-P got back into their RTJ3 album with “Hey Kids (Bumaye),” “Stay Gold,” and “Don’t Get Captured.” The crowd was totally into the new material, clapping along to the beat and shouting the lyrics.  Up to this point Run The Jewels had gone through tracks 2-7 on the new album, in order, but with a few other tracks sprinkled between.

El-P paused to talk to the crowd and joke about how he’s going to retire from rap to start a career in poetry. He then proceeded to recite lyrics from “Panther Like A Panther,” which actually starts off accapella and builds into a burst of energy as El-P keeps rapping. The crowd turned all the way up again when the beat dropped and chorus hit, and Mike got to nail the up-tempo flow with his verse. They mellowed out again with another steady-paced track the ladies in the crowd could actually dance to, “Everybody Stay Calm.”

Next was another one especially for the ladies, as they performed “Love Again (Akinyele Back)” and Gangsta Boo came out to rock her featured verse. The song is much more fun when she’s there to put the female perspective on the sexually graphic song, and I witnessed some ultimate #RelationshipGoals as couples in the crowd rapped the chorus to their partners. It was a funny moment that needed a pause afterwards.

Killer Mike took some time to reflect on all the love Run The Jewels gets in Canada, and jokingly wished the US could trade their President for our Prime Minister. This lead to the crowd breaking out a “Fuck Trump!” chant, just like last summer’s Time Festival crowd. And just like last time, this lead to a performance of some of Run The Jewels’ more politically charged songs, including “Lie, Cheat, Steal” and “Early.” The mosh pit was in full effect once again.

Nearing the end of their set, they mellowed things out once more with the last song off the new album, “A Report To The Shareholders.”  They then ended the set with a song for the day-one fans, the title track off of their first album. Surprisingly this was the only song they performed off that album, and also surprising was the way they just left the stage after putting so much energy in the building. No one believed the show was over, and a strong encore chant brought them back to the stage quickly. 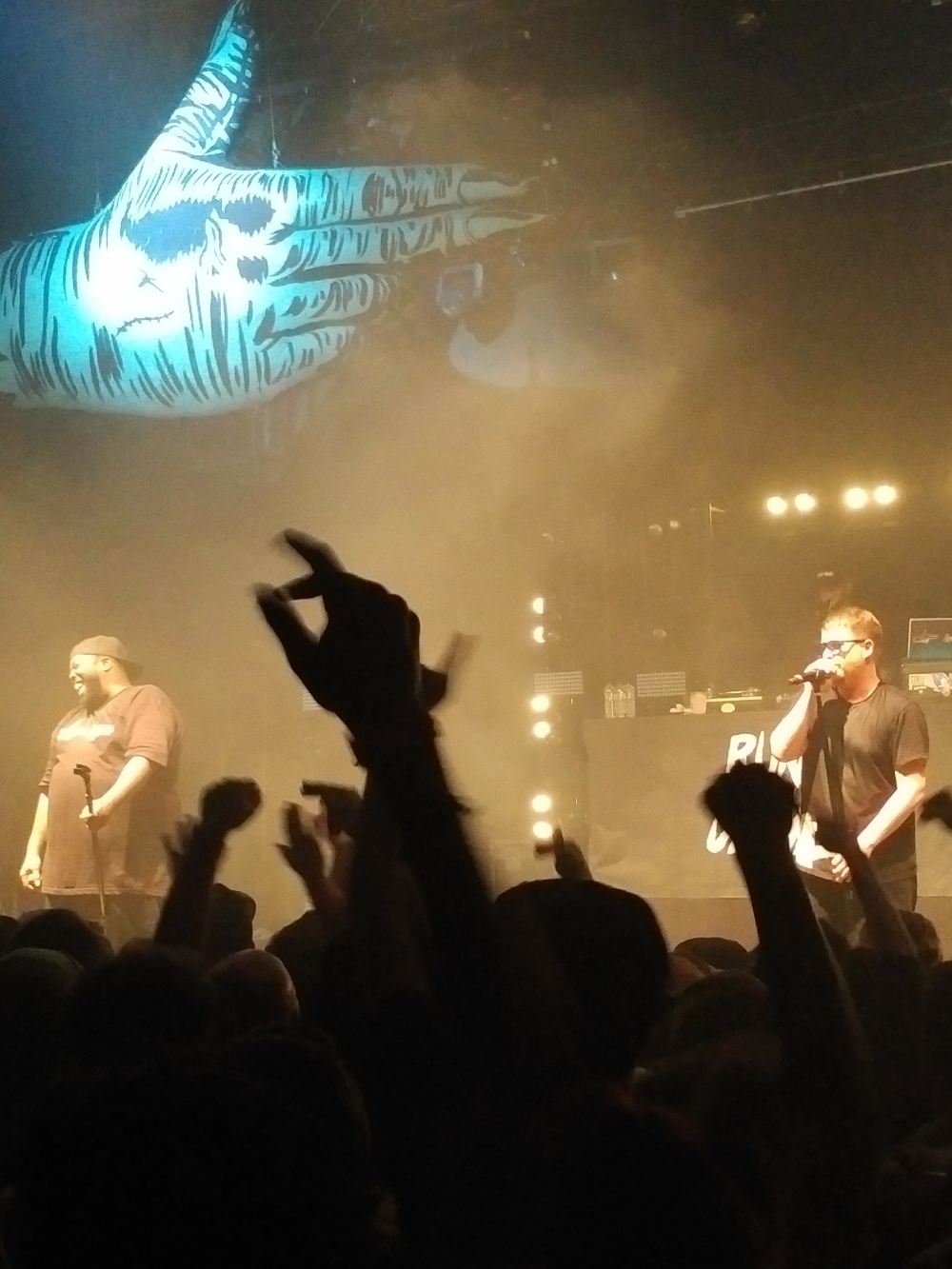 For the encore, Killer Mike and El-P got the crowd turned up again with the Zack De La Rocha-sampling “Close Your Eyes (And Count To Fuck).”  After putting their all into the classic, they thanked the fans once more and closed the show with the first track off the new album, “Down.”  The song itself feels like a victory celebration, which was highly appropriate for this performance.  Killer Mike and El-P put a ton of energy into their performance and left the crowd completely drained and satisfied (pause).  They continue to live up to their growing reputation, as they build on what’s becoming one of the greater discographies in all of Hip-Hop and back it up with a kick-ass live show.

Overall, this was a really fun show.  The new RTJ3 tracks have so much more energy to them when being performed live, especially with DJ Trackstar’s scratching and all the lights choreographed to the beats. With the show being on the same night as the NBA All-Star game, it was definitely worth missing the game to see Run The Jewels.  Killer Mike and El-P brought a ton of raw energy to the stage, and the crowd gave that energy right back.  This was my fifth time seeing them perform, and every show has gotten more and more extravagant.  The Danforth Music Hall might be the perfect venue to see them in, although if they want to meet their demand, they may have to start booking multiple shows when they come to Toronto.