It’s been another game-changing year for one of Hip-Hop’s most influential titans, Jay-Z. After spending a few years away from the music, Hov returned in 2017 with his thirteenth studio album, 4:44, which has had a major impact both with the music itself and the business aspect around the album’s rollout. Having signed a new ten-year touring deal with Live Nation, Jay-Z has embarked on his 4:44 Tour in support of the album, and approached the halfway point of the tour with two back-to-back shows in Toronto’s Air Canada Centre.

Similar to his previous release, 2013’s Magna Carta… Holy Grail, Jay-Z’s new album earned a platinum plaque through a corporate deal with Sprint, as opposed to traditional album sales. Unlike the last album though, Hov broke new ground musically with 4:44, setting a new precedent for the few aging rappers who can still capture the mainstream spotlight. The new album has Hov fully embracing dad-rap, focusing on a message of family values and long-term thinking as opposed to bars & flows, with zero club appeal or blatant pandering to youthful trends. 4:44 isn’t an album you party to; it’s a lounge & listen type of album that goes great with a glass of scotch and a comfortable chair, and this kind of vibe would be reflected in the stage setup for this tour.

Earlier this year we were lucky enough to travel to Philly to see Jay-Z’s first North American performance since releasing the new album, with his headlining set at his Made In America Festival. While it was an epic performance in front of a massive outdoor crowd, the vibe on his 4:44 Tour would be completely different, with assigned seating surrounding a stage in the center of the arena as opposed to an open pit. We got to the ACC to find out that our seats in the 300-level were upgraded to 100-level seats. One could assume this was because of a low volume of ticket sales, but it was also because the corner sections of the upper bowl had an obstructed view after Jay-Z’s book-shaped jumbo screens were installed.

This brings up another interesting point about the 4:44 Tour; it’s somehow projected to be Jay-Z’s highest grossing tour despite low ticket sales for many of the shows. It seems many fans aren’t willing to pay $100 for a seat in the upper level (prices were dropped to around $50 about a week before the show), but are willing to pay several hundreds of dollars for the VIP experience and floor seats. With so many unsold tickets just days before the show, it was surprising to see Live Nation had somehow filled up all the remaining seats after closing off several sections. As we went through the process of getting our tickets replaced and finding our new seats, Vic Mensa was warming up the crowd with his opening set.

Having released his debut album, The Autobiography on Jay-Z’s Roc Nation label this year, Vic Mensa was Jay-Z’s opener for the entire tour, and also performed at the Made In America Festival. We unfortunately missed his performance in Philly, and barely got to catch the last few songs of his set in Toronto. The Chicago-born emcee had a band rocking with him as he performed some of his more pop-influenced songs, getting emotional on “We Could Be Free” before closing his set with the last song on his album, “Rage.” The crowd seemed to vibe well with the short bit of his set we caught, and soon the jumbo screens were lowered to shield the stage as it was prepped for Jay-Z.

You could tell from the beginning that this performance was going to be different from the one Jay-Z did at the Made In America Festival. It started with a video montage of various images of Hov being burned, and the jumbo screens were raised to reveal the man himself atop the stage as he got into the first song off the new album, “Kill Jay Z.” The octagonal stage Vic Mensa had performed on was reshaped to form a hill Jay-Z now stood atop of, and there were gaps along the perimeter where musicians were stationed to play the instrumentals he rapped over. After starting off with some brand new music, Jay began to dive into some throwbacks that immediately got the crowd out of their seats.

The energy got turned up as Jay-Z performed some of his Kanye West collaborations like “No Church In The Wild” and “Lucifer,” before mellowing things out with a clever transition into the 1996 throwback, “D’evils.” After spitting one verse from the latter track for the day-one fans, Jay returned to his Kanye segment with “Heart Of The City,” maneuvering masterfully through his verses as his band switched up the beat on him a few times, and getting the crowd to sing the chorus. He then cranked up the energy some more with “Run This Town,” “Fuckwithmeyouknowigotit” and “Beach Is Better.”

Having touched on seven different albums over his first eight songs, Jay started to focus a bit more on the new album, performing the deeply introspective title track where he becomes an open book (like the jumbo screens) and spills out all his flaws as a husband. Admitting beforehand that it’s a tough song for him to perform, Jay battled through all three verses, sticking to the mic stand center-stage and turning 360 degrees to face all the fans as he rapped. The jumbo screens then closed on him to play another video interlude, which featured famous images with Jay-Z’s wife Beyonce, daughter Blue, and friend Kanye West, but with Jay removed from them.

After the short interlude and music preceding it symbolized Jay-Z removing his ego, the screens were lifted to reveal the stage reverted back to the flat octagon, and Jay returned with another 4:44 track, “Bam.” Just as it does on the album, the Damian Marley-assisted song brought back that braggadocios Jay-Z the fans know and love, and picked the energy right back up. “Fuck all this pretty Shawn Carter shit!”

Jay next got into a medley of some of his most popular hits over the years, performing “Jigga My Nigga” and “Izzo” while getting up close to the crowd, and then sticking to center-stage as a light show went off around him during “Dirt Off Your Shoulder.” The laser lights continued to put on a spectacle as Jay continued into “On To The Next One,” and rocked another club hit with “I Just Wanna Love U.” Much of this segment was familiar from Jay’s Made In America performance, except the awesome light show is something you couldn’t get with an outdoor stage.

Jay rocked a certified head-nodder with both verses from “PSA” before doing another familiar segment where he transitioned from 4:44‘s “Family Feud,” which features a sample of Beyonce singing the word “higher,” to the throwback “U Don’t Know,” which starts with Jay’s famous lyric “turn my music high!”. He then got into the rebellious hit “99 Problems,” and seeing as everyone on the floor had assigned seating, he opted to skip the third verse entirely rather than start a mosh pit with the beat transition to Linkin Park’s “Points of Authority.” Brightening up the mood, he then rocked the classic “Big Pimpin’,” performing both of his verses before spitting the late Pimp C’s verse accapella.

Next was an exclusive just for Toronto, as Jay shouted out Kardinal Offishall and Drake, getting his DJ to play Drizzy’s “Know Yourself.” We thought Drake might come out to perform a song or two with Jay, but instead Jigga spit his rapid-fire first verse from “Nigga What, Nigga Who” over the Drake beat. Jay then did something special for the day-one fans, performing “Allure” off of 2003’s The Black Album, but then on the second verse reaching back to 1996 and rapping “Dead Presidents II” over the same beat. There would be another video interlude on the big screens before Jay went from 1996 all the way back to 2017, returning to perform more of the new album. 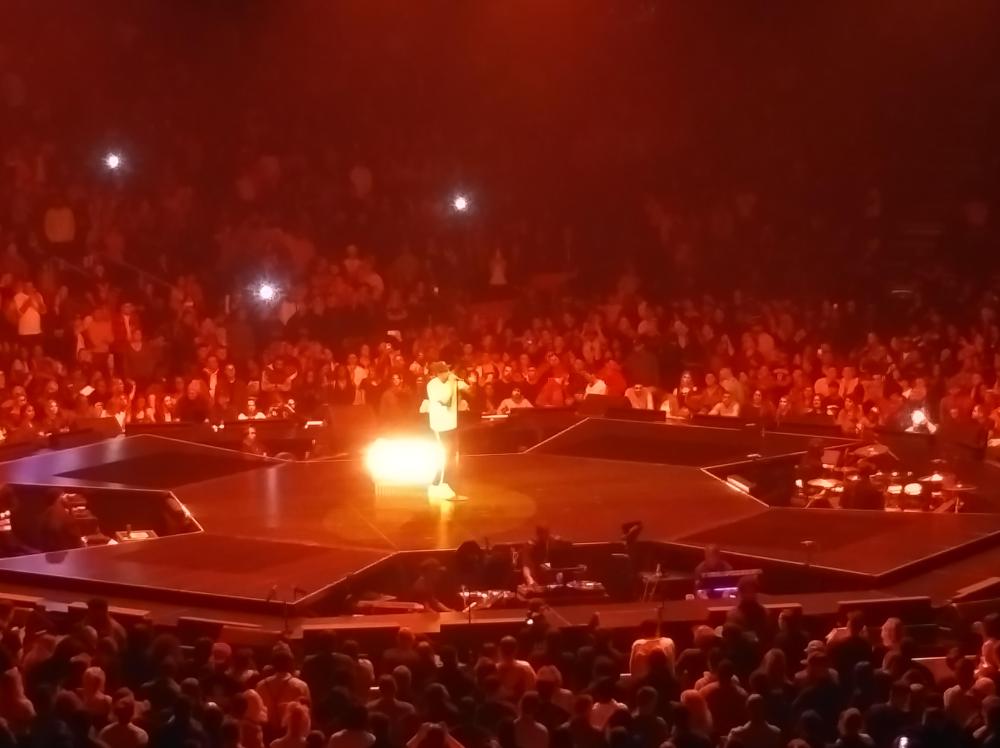 Jay put his big screens to good use over the next couple songs, performing “Moonlight” with a visual of the moon on one screen, and an overhead camera and spotlight making it look like he was standing on the moon on another screen. He then performed the single “The Story of O.J.,” with the controversial animated music video playing on the screens. Jay-Z has been more vocal about social issues in 2017, and naturally took some time between verses to speak on the National Anthem protests he’s supported, saying “we’re not protesting against a flag, we’re protesting against injustices.” He tied his point back to American Thanksgiving, calling it a “fucked up holiday” for how they celebrate mass murders.

The energy had died down with the last couple songs from 4:44 being more mellow, and so Jay cranked it up again with his 2011 hit “Niggas In Paris,” counting down from ten and making everyone jump (although the assigned seating setup prevented the mosh pit he likes to create during this song). He then did a tribute to his hometown Brooklyn, New York, going back to 1997 with “Where I’m From” before getting a fan in the crowd to guess the beat transition the band was playing, which eventually turned into 2009’s “Empire State of Mind.” Jay then had some fun, getting the DJ to play his daughter Blue’s freestyle on the new album, which appears as a bonus track on the CD edition.

Over the decades, Jay-Z and his music have provided inspiration for entrepreneurs and business-minded people (which may be justification for the high ticket prices), and in that spirit he got into a speech about overcoming hard times, perseverance, and focusing on your goals. This then led into a performance of his 1998 hit “Hard Knock Life,” followed by an accapella version of 4:44‘s “Smile,” with No I.D.’s sample being teased towards the end. Continuing to motivate, Jay gave a quick word on mental health and checking up on your friends before doing a tribute to the late Chester Bennington, giving an inspired performance of “Numb/Encore.” Jay got the crowd to light up the arena with their cell phones and lighters, and focused in on nailing his verses and adlibs while the crowd sang along with Chester’s vocals. He then humbly thanked the crowd and walked back to the dressing room, clapping hands with the fans along the way as the band played him out.

While much of the set list was the same as Jay-Z’s Made In America performance, this slightly tweaked version of it flowed more fluidly, and it all sounded nicer with live instruments as opposed to one DJ. The laser lights and the design of the jumbo screens made for a different experience, and the 360-degree stage put all the focus on Jay as he expertly performed his songs. This may have been my favourite set list I’ve seen Jay-Z perform, as it included many tracks off my favourite album of his (The Black Album), but this time he also added a couple rare Reasonable Doubt songs for the diehard fans. The Toronto crowd definitely seemed pleased with the performance, as Jay-Z took us through eleven of his albums and gave a good mix of both the hits and the deep album cuts. Overall, it was a fun moment to have with one of Hip-Hop’s most prolific legends.