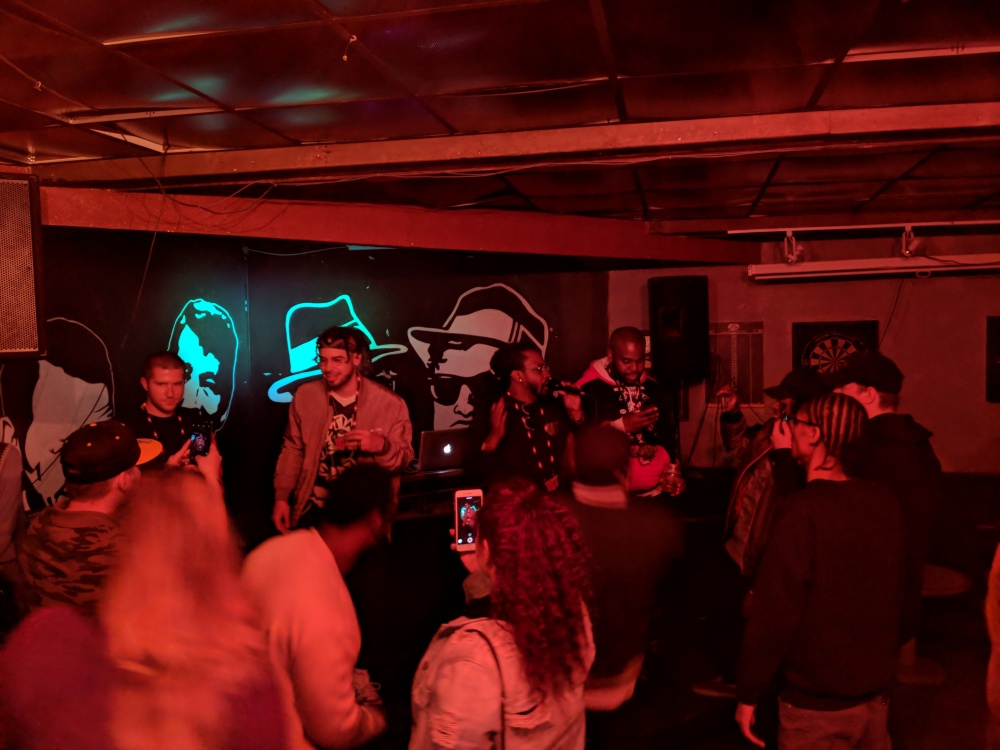 Connect The Dot is a competition touring all across the GTA in search of the best MCs in Toronto and the surrounding areas. After seeing Toronto legend Saukrates crown the 2017 Connect The Dot Champion back in January, he’s back on tour with the team, judging all the showcases himself and selecting artists to compete in the 2018 championship round. This showcase would feature artists from the Oakville area performing at Less Than Level, where we of course saw Saukrates perform just last month on his Season 2 Tour. Besides the local competition, the show would also feature performances by Juno award-winner Adam Bomb, Toronto MCs Mic Gutz and Dre Specz, as well as the 2017 Connect The Dot champion, Saipher Soze.

The show got started in organic Hip-Hop fashion, with an open mic cypher for any MC who wanted to spit a 16. DJ VP set the mood with some Wu-Tang beats, alternating between the songs “Duel of the Iron Mic” and “Triumph,” and MCs got on the mic and spit whether they were competing later on or not. Eventually Saukrates and his wife took their spot in the lounge chairs in front of the stage, and host Mic Gutz laid out the ground rules for the competition: two songs per artist, and raw vocals on the verses (no playing hypeman to your own vocal track).

The first artists to start off the competition were the duo Otherwise Known, who we had seen rock their own showcase in Toronto back in November. They came out with a ton of energy, getting the party started with a couple songs off their Word To The Wise EP, “Comin’ Thru” and “Where The Party At.” They had fresh, alternate beats for both songs, and had the crowd chanting “O.K.!” by the end of their set. Saukrates could be overheard saying they reminded him of Run-DMC.

The first three competitors gained appeal for their up-tempo, energetic tracks that got the crowd bouncing. The next competitors would take things in a different direction, as an MC named Maceonic performed a more moody song that took the crowd to an emotional place. After him would be the duo Ill Qaeda, who had a more aggressive, hardcore style of rap. These guys were all dope, but didn’t quite hit the vibe Saukrates was looking for.

There would be a break in the competition, as Dre Specz took the stage and performed a few tracks, bringing it back to that boom-bap. He would be followed by the 2017 Connect The Dot champ, Saipher Soze, who got a more lengthy time slot than before. As part of the championship prize pack, he’d be performing at every stop on the 2018 tour. Before the final touring artist would perform, another competitor by the name of Tu would get his two-song set slipped in. MC Tu would bring a ton of energy to the stage, and effectively pumped up the crowd for the headliner Adam Bomb.

The Juno award-winner came out and kicked some dope rhymes over head-nodding beats, flowing perfectly in-pocket. Performing both solo joints and some of his verses with Naturally Born Strangers, Adam Bomb closed out his humble set with “Jameson Ave,” getting the crowd to rap the hook with him. The competition would then continue on.

An MC named Vonte would take the stage for his two-song performance. He would later explain that his addition to the showcase was last minute, and so he didn’t have his tracks prepared without vocals on them. While he did rap over his own vocal recordings, he made sure to rap every word in every verse, and not use the recording as a crutch. This would be good enough to land him the second-place prize in the competition.

Next up would be the final act in the competition, a group called Woodlawn Warriors. As the name suggests, they had some aggressive tracks with a hardcore vibe to them. Saukrates would take some time to contemplate his selections by the ping-pong table, and host Mic Gutz would spit some verses to keep the crowd entertained in the meantime.

Saukrates eventually got the crowd to gather around the stage as he announced the winners. While he had selected the top two artists himself, he let the crowd choose the third-place winner by having them cheer for the three runner-ups. Between Otherwise Known, Phillie and Providence The Poet, the crowd made the most noise for Phillie, giving him the third-place prize. Saukrates then announced Vonte as the second-place winner, and Tu as the Oakville champion, praising their ability to rock the mic and move the crowd. All three MCs would be invited to the championship showcase in Toronto later this year, and would receive different prize packs including promo and merch.

Nearing the venue’s curfew, Saukrates performed a short, three-song set to close out the show. After the champs had praised Sauks for being an inspiration to them with songs like “Father Time,” he decided to start off with that very song. He then continued into the classic “Money Or Love,” before performing “On The Run” accapella as the DJ was told to shut down his equipment.

Overall, this was a fun time seeing Oakville’s best MCs compete on stage. Connect The Dot continues to do excellent work bringing together Toronto’s local Hip-Hop communities for healthy competitions, keeping the culture alive. The tour will hit downtown Toronto before wrapping up in Ottawa this month, and the champions from all the tour stops will return to the city for a later showcase.