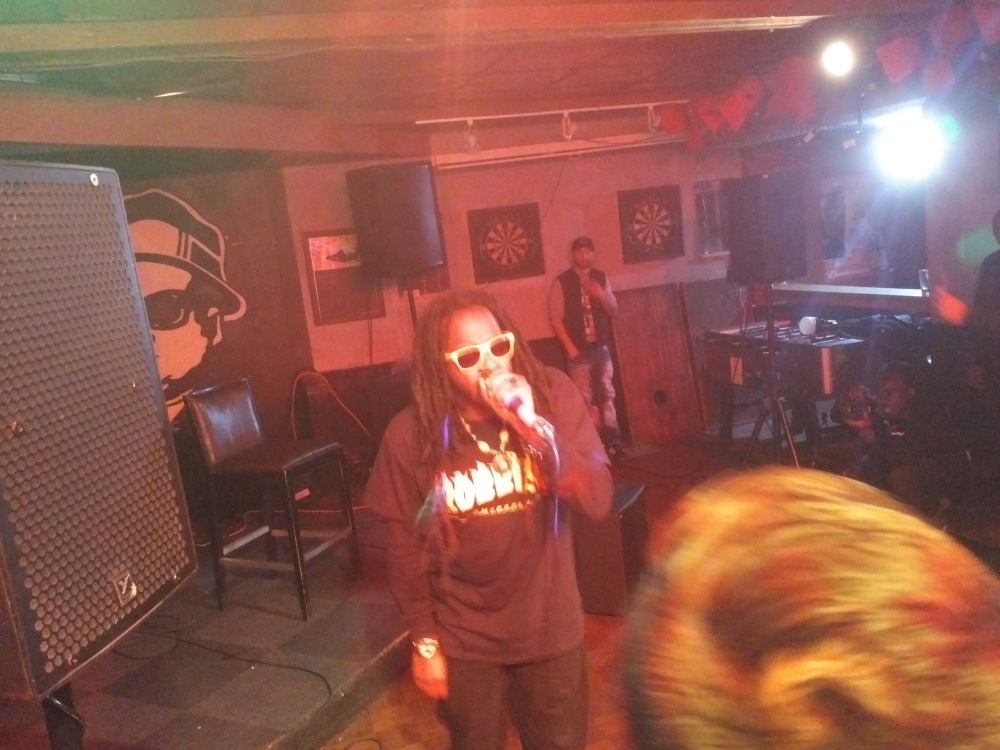 Toronto legend Saukrates has been on a tear lately, re-releasing his classic 1999 album The Underground Tapes on digital platforms for the first time, including new songs, remixes and exclusive commentary to go along with it (peep the single I got to premiere on AmbrosiaForHeads.com last month), as well as providing support to the local Hip-Hop scene through his work with Connect The Dot. With the nostalgia surrounding The Underground Tapes re-release getting all the attention, it’s almost been an afterthought that Saukrates also delivered an entirely new album in 2017 with Season 2.

Big Soxx is about to get busy, embarking on two tours simultaneously throughout Ontario in a series of intimate, small venue shows. He’ll later be leading the panel of judges on the Connect The Dot Tour to find the best MCs surrounding the Toronto area, but this particular show would be part of his Season 2 Tour, where he’d be performing a deeper set list with songs off the new album. While this tour will eventually take him to Toronto in May, Saukrates is spending April hitting all the smaller towns just outside of the GTA, including this stop at Less Than Level in Oakville.

The Hip-Hop market in Oakville is small, with only a few dozen people coming out to these shows at Less Than Level, making the performances much more intimate than a typical concert. It’s also a much more interactive environment, as the performers would be amongst the crowd when they weren’t on stage, and Saukrates could be seen playing pool and ping pong with his wife and some fans as the local openers got the show started.

First up was Burlington’s own Scence, who had some fans rocking some of his custom merch in the crowd. Coming off of some health issues that prevented him from performing for a while, Scence delivered a quick but dope set, including a rapid-fire accapella verse showcasing his raw talent. He would be followed by an MC called PB $TYL$, who had a different style of rap for every song he performed. The type of beats he rapped over ranged from old school boom-bap, to Swollen Members/Battle Axe-inspired hardcore, to bouncy trap beats.

The last of the local openers before the touring acts hit the stage would be Kid Lifted, who had some high energy, trap flavoured songs, and a hint of southern style to his flow. He got the crowd energized before an MC named Keaton from Kingston took the stage, with a mix of sung and rapped vocals. The opening performances seemed to go by quickly, as before you knew it, it was time for the final artist before Saukrates, Guelph’s own Robbie G.

Robbie G has been doing some heavy multitasking as the promotor and booker for the entire Ontario tour, as well as the host for the event, introducing all the artists who performed earlier, and now he would get to perform himself. Having previously headlined his own show here last fall, he’s been a big part of building up these smaller Hip-Hop markets outside of the GTA. His set started off with some songs off his new 2018 album Fire, including the single he just released a video for, “Decade,” and his rapid-fire flow got the crowd moving immediately. He then rocked some throwbacks, performing fan favourites like “Nothin’ To Do With Me” and “The Homies” before bringing out Saukrates.

Big Soxx had surprised everyone by coming out early during Robbie G’s set (wearing a Robbie G shirt) to sing the hook to their collab together, “Capture The Moonlight.” Now with the stage to himself, the veteran did some stretches before dancing to the beat of his Season 2 song, “Ghandi.” Having kicked off the dance cypher, he then got on the mic and performed the title track off of that Season 2 album, as well as some classic throwbacks like “Father Time” and “Money Or Love,” getting the crowd to sing along to the hooks.

He performed another Season 2 song, “Dreams,” and had some fun revealing how he borrowed the lyrics to his hook from Bob Seger’s “Old Time Rock & Roll,” performing both the rock and rap versions. With his wife sitting off to the side of the stage, he got her to get up and dance with him as he performed “Fever,” and then opened up another dance cypher in the crowd as the DJ played some Toronto Hip-Hop classics. The DJ teased the hook from Saukrates’ Season One hit “On The Run” before diving into Kardinal Offishall’s “Ol’ Time Killin” for everyone to dance to.

After dancing up a storm, Saukrates got back on the mic and kept the party going, as the DJ played Choclair’s “Let’s Ride” and Saukrates performed the hook. With the throwback songs setting the vibe, Sauks then took it old school and had the DJ beatbox for him as he spit an off-the-dome freestyle, rhyming about whatever he could see in front of him. After showing off his raw MC skills, he then closed out the show with a full performance of “On The Run.”

It takes true skill and talent, and an ability to connect with the crowd to be able to rock a small venue show like this. With no light shows, smoke machines or gimmicks, Saukrates got the crowd moving with nothing but himself, a DJ and a microphone, and he kept everyone engaged for an hour before humbly taking the time to meet all the fans by the merch booth. Whether he’s performing in front of thousands of fans or just a couple dozen, Saukrates always puts that raw emceeing on display and rocks the house all the same.

Saukrates’ Season 2 Tour ends in Toronto at Nocturne Nightclub on May 10th, and he’ll be right back here at Less Than Level on the Connect The Dot Tour on May 12th.