May 25th, 2019 will forever be remembered as a historical night for Toronto. The day started off as the first time in over 25 years that any major Toronto sports team had an opportunity to clinch a Finals berth with a home game, and it ended as being the very first time the Toronto Raptors won the Eastern Conference Championship, winning at home to move on to the NBA Finals. It’s almost unfair writing a concert review on such an exciting night, as no matter where in the GTA you were at the time, the Toronto Raptors were the talk of the town. If you happened to be at the newly opened Rec Room in Mississauga, the Game 6 post-game celebration would involve a live performance by a Toronto Hip-Hop legend, Choclair.

It’s been 20 years since Choclair first broke ground with his debut album, Ice Cold, and also 20 years since the Toronto Raptors first brought NBA playoff excitement to the city. Looking back on that time period, Canadian Hip-Hop and Toronto’s NBA team were both still on the come up, and Ice Cold was just one of the albums that would be a key piece in not only building up Toronto’s Hip-Hop scene, but also Canada’s as a whole. After being part of history with the song “Northern Touch,” which could be considered Canada’s equivalent to “The Symphony,” Choclair went on to release Ice Cold in 1999 and became a staple in Canadian Hip-Hop history. The Juno award-winning emcee was initially celebrating the 20th anniversary of his Canadian classic with this concert, but it would surely be overshadowed by the Toronto Raptors’ celebration.

Just one of many viewing parties happening around the GTA was at The Rec Room, at Square One mall in Mississauga. Besides the location in downtown Toronto, this is the only other Rec Room in the GTA, just opened earlier this year. With two floors of entertainment ranging from arcade games to bowling and axe throwing, fans could keep themselves busy and spend the entire day leading up to the game here, although all the tables in the restaurant/sports bar area were reserved for game time well in advance (including a VIP table directly in front of one of the screens where Choc himself could be seen watching the game with his entourage). This didn’t matter though, as a large crowd congregated around the jumbo screens to cheer on the Raptors with the same energy as if they were in Jurassic Park, and the celebrations broke out as the final seconds ticked off the game clock.

While many fans decided to end their night at The Rec Room after the game, the Hip-Hop heads in the building moved down to the stage area for a concert that was made free just a day prior, in celebration of the Raptors’ success. DJ Spence Diamonds would hype up the building with some celebratory songs like “We Are The Champions” and “All I Do Is Win,” and pretty soon afterwards, Choclair would begin his performance while the jumbo screens above still showed live footage of the Raptors receiving the Eastern Conference Championship trophy. The fans were hyped off the victory and were ready to party as Choc provided the soundtrack for them to get down to. 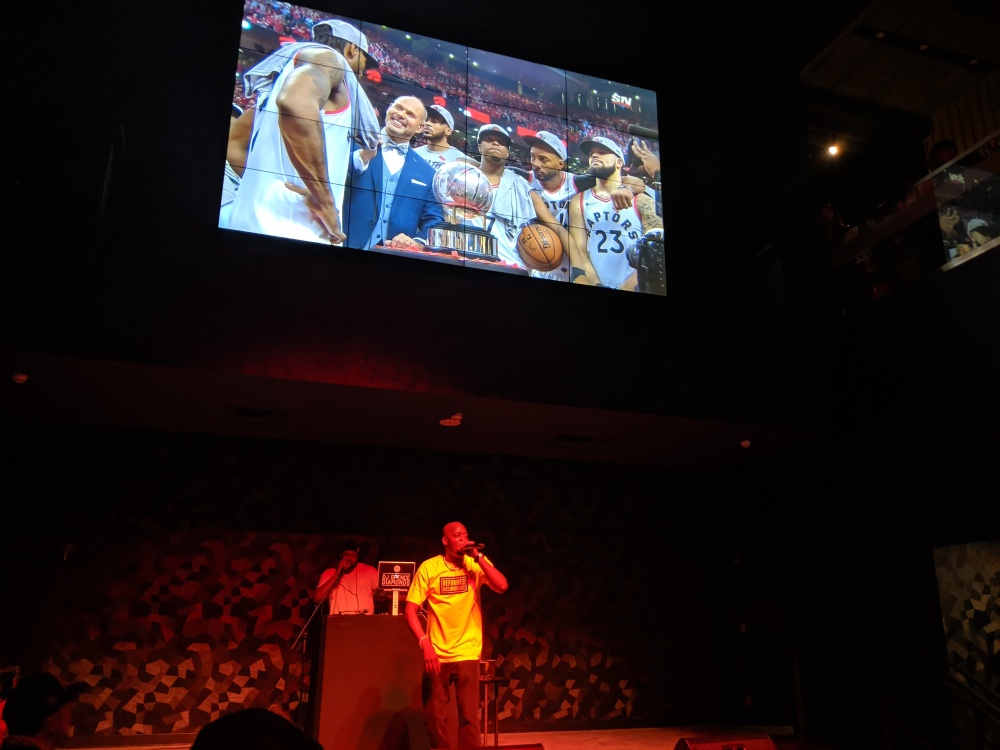 As we watched the live footage on the jumbo screen above the stage, Choclair got us grooving by taking us through years of his hits. He performed a little bit of Ice Cold, with the hit song “Rubbin,” and the crowd continued to dance as he moved on to the early 2000’s with the classic “Light It Up.” Even with the post-game footage still playing, Choclair kept the crowd engaged, getting them to shout if they knew about old-school Hip-Hop artists like KRS-One and BDP, before performing his own ode to the old-school, “Breath Control.”

Continuing on with more of his early 2000’s hits, Choclair performed familiar chunes like “Skyline” and “Love ‘Em All,” before taking it all the way back to the beginning with “Northern Touch.” The crowd got hyped as Choc & DJ Spence Diamonds covered that iconic hook from Kardinal Offishall, and were fully engaged as Choc did some call-and-response in place of the Rascalz’ verse before nailing his own verse. Next, Choclair would stick to some throwbacks and test the crowd to see how much they knew about Hip-Hop. DJ Spence Diamonds would spin a medley of tracks and Choc would get the crowd to rap along, playing songs like Busta Rhymes’ “Break Ya Neck,” Wu-Tang’s “Ice Cream,” Naughty By Nature’s “Hip-Hop Hooray,” Biggie’s “Dead Wrong,” Ol’ Dirty Bastard’s “Shimmy Shimmy Ya,” Pharaohe Monch’s “Simon Says,” and M.O.P.’s “Ante Up.” The crowd got more hyped with each song. 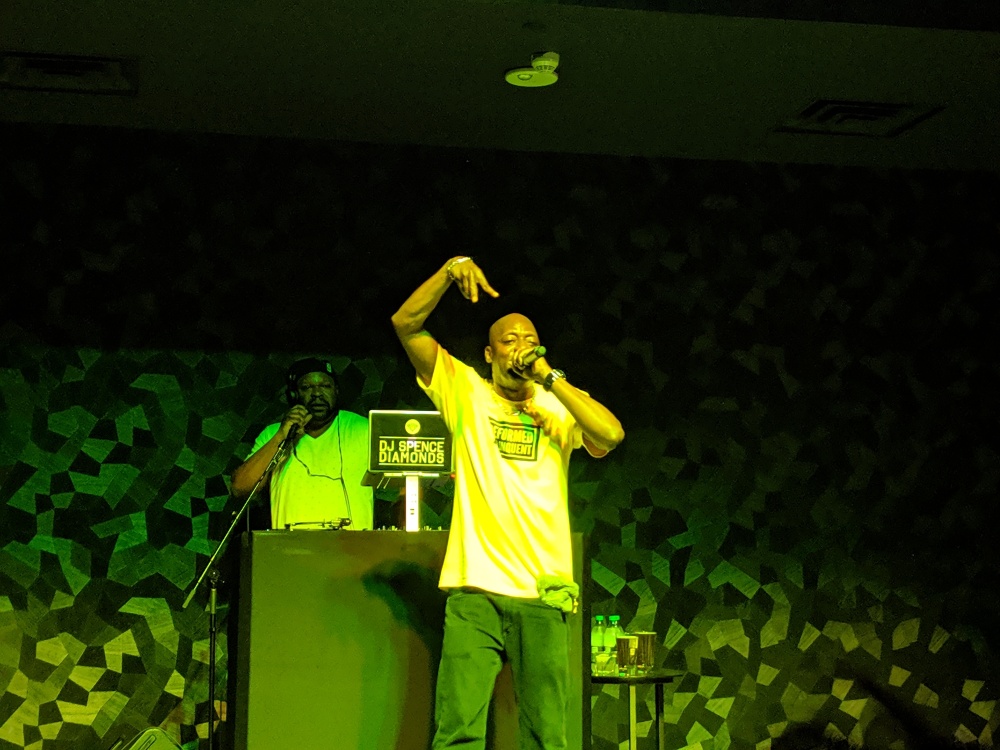 Choclair would perform a couple more of his own songs, rocking “Made (Move Mountains)” before closing out his set with his most memorable Ice Cold hit, “Let’s Ride.” He got the crowd to all wave their arms during the last song, and humbly thanked everyone for rocking with him as he closed out his set. The victory celebrations would continue and DJ Spence Diamonds continued to spin, and the crowd either rocked with him or hit up the arcade games.

This was overall an amazing experience, although it’s hard to imagine how it would have went if the Raptors were to lose the game. By getting to witness sports history in favour of the hometown, the positive energy in the building was that much more amplified. Choclair happened to be in the right place at the right time with this performance, as the crowd was fully ready to party with him when he got on stage. He was also the perfect artist to perform at this party, as it became a night to celebrate Toronto excellence, both in sports and in music, and to bring things full circle from the Vince Carter days. The Rec Room proved to be a fun venue regardless of the occasion, and it would be cool to see more Hip-Hop concerts here in the future.