The Legendary Roots Crew, simply known as The Roots, have returned to Toronto for the first time in I don’t know how long.  Those who follow me on Twitter already know I was really excited for this show.  The first rap concert I ever went to was the 2009 Rock The Bells Festival in Los Angeles, and that was the only other time I saw The Roots perform.  I first got into them when I was in high school, around when Game Theory came out, and I would go on to discover one of the most consistently great discographies in all of hip-hop.  With The Roots widely recognized as one of the greatest live acts in all of music, and their frontman Black Thought being one of my favourite rappers, I’ve been looking forward to the next opportunity to see them perform again.

The Roots’ return to Toronto is brought to us by The Luminato Festival.  Luminato showcases various forms of art throughout Toronto every June, and this would be my third time attending their hip-hop showcase at their outdoor stage in David-Pecaut Square.  I saw Deltron 3030 preview their Event II album at the 2012 festival, K-Os go through his classics with a live band and DJ Kid Koala’s unique Space Cadet show in 2013, and now this year The Roots were here to promote their eleventh album: …And Then You Shoot Your Cousin.  While the 2009 Rock The Bells Festival had The Roots open for Busta Rhymes, Nas & Damian Marley, and Ice Cube, I was especially excited this time because they were the headlining act for the Luminato Festival; everyone was here mainly to see them.

The stage setup at the Luminato Festival looked familiar from previous years, except this year they added beach chairs to the surrounding areas, as well as a second stage for smaller acts while we waited for the main show.  They also closed off the festival area, only giving access to ticketholders, which meant that alcohol could be consumed near the stage as opposed to being sealed off in a tent the past couple years.  The improved layout and the clear skies set the mood right for this show.

Toronto’s own Adrian X got on stage with his band right on time as the opening act.  He had previously done musical directing work for Canadian artists like Drake and Nelly Furtado, but now he has his own album to promote: Soulgazer.  Most of his songs were instrumentals, with the main spotlight on his guitar.  He hit every note gracefully as he took us through his own songs, as well as a Jimi Hendrix cover.  His band shined too, as his backup dancers did their thing, the drummer got a solo, and the keyboardist stepped up to the mic to sing for one song, and then played guitar at the end.  Adrian X showcased his mastery of guitar, playing with the instrument behind his head multiple times, and he gave a nod to The Roots by playing the familiar melody from “You Got Me” at one point. 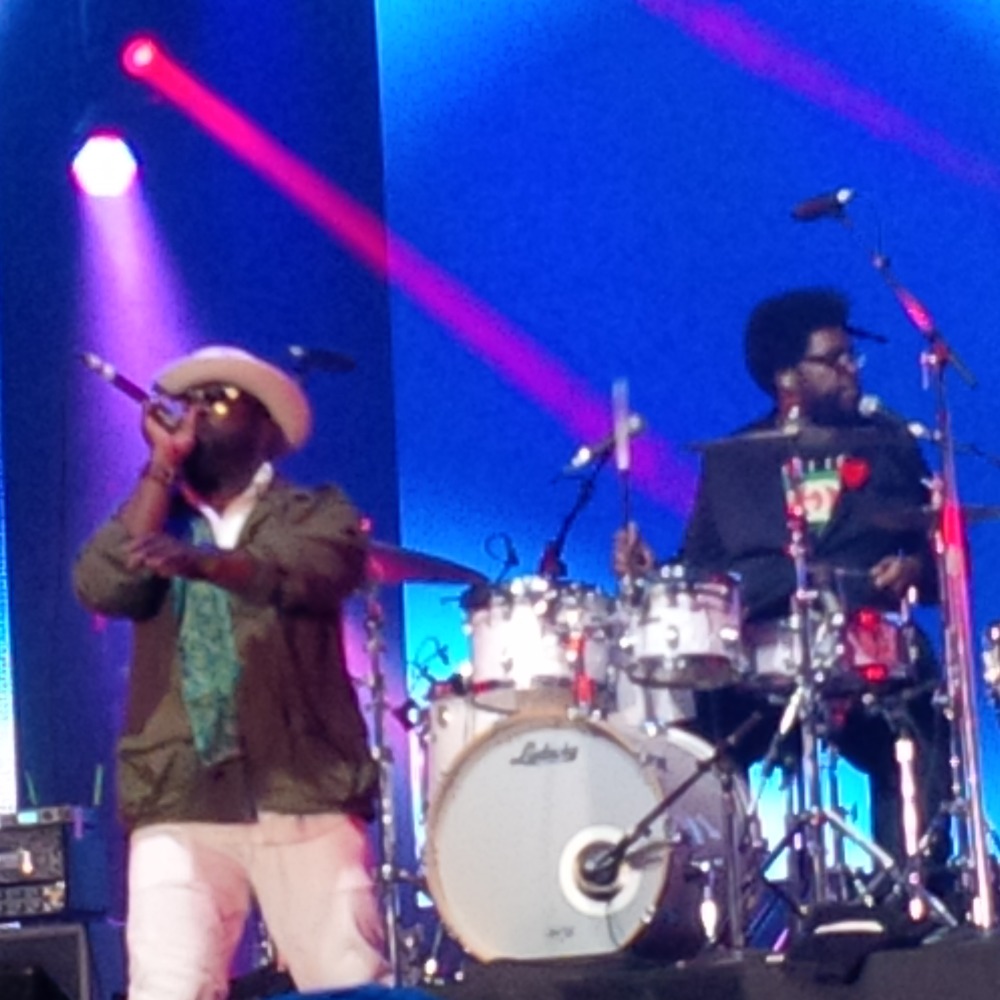 We thought Adrian X was great, but then The Roots came out and defined what great really means.  I was hoping Black Thought and Questlove would get things started by performing one of my favourite songs, “Web”, but instead the whole band came out together and started with some songs off the new album.  They began the show with the middle section of …And Then You Shoot Your Cousin, letting “The Devil” serve as an introduction before getting into “Black Rock” and “Understand”.  Once The Roots get going, they maintain a continuous stream of music, seamlessly transitioning between songs.  The ending instrumental from “Understand” soon turned into the beginning of “In The Music” from their 2006 album, Game Theory, and then they got into a showcase of the most recent decade of their career.

The dark sounds of “In The Music” transitioned into another favourite of mine, “Don’t Say Nuthin'”, and then they performed “Get Busy”, with Black Thought doing his own verse as well as Dice Raw and Peedi Peedi’s verses.  The Roots also like to incorporate short covers into their set as transitions between their own songs, as they did a cover of “Jungle Boogie” before getting into “Don’t Feel Right”.  If I remember correctly, most of the band members walked off the stage at this point and let Questlove and Frank Knuckles have their own drum and percussion solo.  After their back-and-forth drumming, DJ Scratch came out of nowhere and did some beatboxing with them while the rest of the band got set up again. 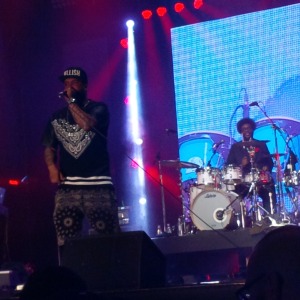 After Scratch wrapped up his interlude, The Roots came back with “The Fire”, with Captain Kirk singing John Legend’s chorus and Black Thought delivering his verses to perfection.  Next was another solo, this time by The Roots’ sousaphone player, Tuba Gooding Jr.  He’s arguably the second hardest working band member on stage (next to Questlove), as he runs and jumps around, pulling stunts while still hitting every note on his heavy-looking sousaphone.  Soon he got into a consistent beat, as the rest of the band joined him in what turned out to be “Break You Off” from their 2002 album, Phrenology.

The constant flow of energy continued as The Roots transitioned smoothly between their own songs, cover songs, and fun musical interludes.  Next up for a solo was a different keyboardist sitting in for Kamal Gray, I think his name was Mel Man(?).  He used autotune on his mic and did some robotic-like singing, which sounded pretty cool.  The big solo that everyone talks about was next though: The Roots performed their Grammy award-winning song, “You Got Me”, and after all three verses, Captain Kirk got into a long guitar solo.

Most of this song seemed familiar from when I saw them in 2009, like the beat changing during the third verse, and Kirk singing Erykah Badu’s chorus as well as matching the pitch of his guitar during the first part of his solo.  There were new changes to the guitar solo though, as The Roots incorporated a few covers in between Kirk’s usual routines.  I think I remember hearing parts of “Sweet Child O Mine” by Guns-N-Roses as well as “Immigrant Song” by Led Zeppelin in the mix between Kirk’s guitar-crying segment and his playing the guitar above his head.  Captain Kirk’s guitar solo was probably one of the biggest highlights of the night for most people.

Next for The Roots was a short throwback section, as they did songs off their 1995 album, Do You Want More?!!!??!.  They did “Proceed” and “Mellow My Man” before turning the time machine around and moving back towards the present.  Surprisingly, they completely skipped the rest of the 1990’s (other than the previous songs) and went straight into 2002 with “Thought @ Work”.  They got the crowd clapping and yelling as they got into more hits like “The Seed 2.0”, “How I Got Over” and “Here I Come”, along with some short covers between songs (like remixing Damian Marley’s “Wecome to Jamrock” to sing “welcome to T-Dot”).  The Roots then wrapped up their 2-hour set with one of my favourite songs to see live: a cover of Kool G Rap’s “Men At Work”, with Black Thought spitting every word in all three monster verses in double-time.

Overall, The Roots’ performance is something everyone should have on their bucket list and should try to see at every possible opportunity.  Their songs have such a different energy when they’re performed live, as opposed to being played off the albums; even if you own all of their albums, you still haven’t had the full Roots experience until you’ve seen them in concert.  Their catalogue is so great that they can do a show completely ignoring Organix, Illadelph Halflife, Undun and most of Things Fall Apart, and still put on one of the best shows of the year.  I was also able to get my Phrenology album cover autographed by Captain Kirk and Tuba Gooding Jr after the show (with a little help from my friends).  The Luminato Festival is going to have a tough time topping themselves next year.

After The Roots’ show in David-Pecaut Square, Questlove went on to do a DJ set just a few blocks away at a club called Tattoo.  I was supposed to come here back in March to see Slaughterhouse, but they unfortunately cancelled their entire tour to work on their upcoming album.  This was my first time at Tattoo, and it was also my first time attending a DJ set.  When I got to the venue it seemed like any typical club, with a different DJ spinning some oldies and people getting down on the dance floor.

Pretty soon after I arrived, Questlove got behind the turntables and started spinning some classics by Michael Jackson and Nirvana.  He did some cool things like playing some older songs followed by newer rap songs in which the old ones were sampled, like Justice to Jay-Z and Ray Charles to Kanye West.  It was a nice blend of old school and new school.  My crew decided to leave early though, as the atmosphere was like any typical nightclub, except it was way too over-packed and there was no room to move.  Also Questlove decided to play some Tyga and Lil’ Jon, which helped us finalize our decision to leave.  Tattoo looks like it can be a good venue if they don’t over-pack it though, I’ll be back here real soon for another show – stay tuned!

UPDATE: I was going to go back to Tattoo to see Nitty Scott, MC, but unfortunately the show had to be cancelled due to issues with border crossing.

Leave a Reply to cool hoodies for men Cancel reply