Celebrating its ten-year anniversary, Unity Charity is back with its annual summer festival.  While they work throughout the year to engage and support the GTA’s youth using Hip-Hop in their after-school programs, Unity’s summer festival is a celebration of their work, with many young, local artists participating.  The festival includes events throughout the week showcasing all of the Hip-Hop elements, including dance, beatboxing, graffiti and MC/spoken word, and is capped off on Saturday with a free, outdoor concert.

While past years have seen Hip-Hop legends like Talib Kweli and GZA headline the free show in Dundas Square, the ten-year anniversary would have a change in location a few blocks west to David Pecaut Square, and would be headlined by Main Source.  Main Source is of course made up of Toronto DJs K-Cut and Sir Scratch, and Queens, New York legend Large Professor.  They’re celebrating the 25th anniversary of their classic debut album, Breaking Atoms, which over time has become most famous for featuring the recording debut of Nas, with his guest verse on the song “Live At The Barbeque.”

It’s been a few years since I saw a concert at David Pecaut Square, the last time being in 2014 to see The Roots.  The square has changed a bit, with decorative fountains, a pond and a torch being added, and the stage was set up on the concrete area between the skyscrapers rather than on the lawn.  I showed up around 8pm, and all the action was off to the side of the stage, where a studio dance floor was laid down for a breakdance cypher.  People of all ages were taking turns getting down in the middle of the circle as DJ Mensa hit them with some groovy mixes, including a sped up version of Childish Gambino’s “Redbone.”  When it was time for a performance, the crowd moved from the cypher to the front of the stage. 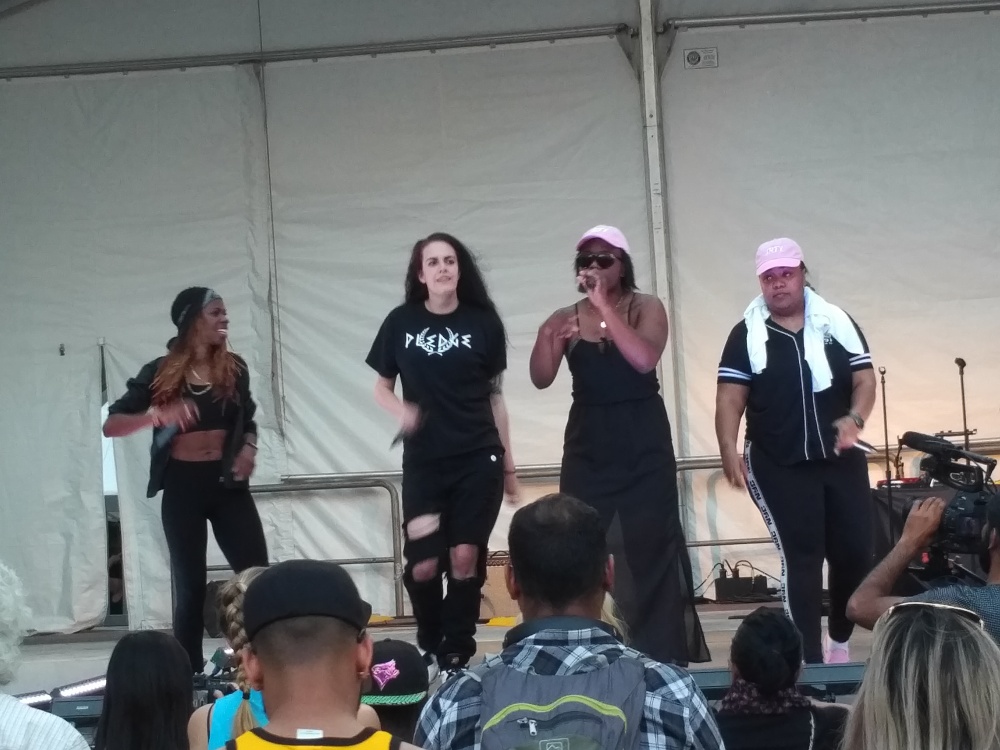 While performers had been hitting the stage since 3pm, the first ones up after I got there were a local group of emcees called The Sorority.  The four ladies in the group came out to the beat from Pharaohe Monch’s “Simon Says,” and immediately had the energy levels cranked up, despite the modestly sized crowd.  They showcased all kinds of styles during their set, going from aggressive battle raps to personal songs about relationships, to fun party tracks.  The four personalities meshed well on stage, each of them standing out in their own way, and they all proved themselves to be dope spitters.

Most of the crowd went right back to the breakdance cypher after The Sorority wrapped up their set, and would continue to keep it going between performances.  As the sun was setting, there was a performance from the champion of the beatbox competition earlier in the week, Montreal’s Elisii, and a couple spoken word poems by the champion of that event.  After some more breakdancing, it was time for the next musical performer, TOBi.

The hosts introduced TOBi by mentioning how he opened for Chance The Rapper at the Budweiser Stage earlier this year, and that was a good indication of the style of music we’d be hearing.  He had a DJ, a keyboardist and a guitarist backing him, and he himself came with a combination of rapped and sung lyrics similar to Chance’s rap style.  While I’m not a huge fan of that style of Hip-Hop, I could appreciate the talent on stage, as TOBi moved seamlessly between rapid-fire raps and soft RnB-style singing, and his guitarist slayed some guitar solos.  The crowd was into it, as he got them to shout some lyrics for one of his hooks, and it was overall a fun set.

The crowd grew as it was almost time for the headliner, but there would be one last, quick performance from R.I.S.E. Edutainment (Reaching Intelligent Souls Everywhere) before we’d get to see Main Source.  R.I.S.E. is a similar youth-oriented program to Unity, and their rep came out to rap, spitting an accapella verse and getting a reaction from the crowd with lines like “the beats are getting better but what happened to the lyrics?”.  She then got into a tribute to the late Prodigy of Mobb Deep, playing beats from their classic songs “Quiet Storm” and “Shook Ones,” and going back to the basics with some call-and-response raps.  It was a dope way to transition from hearing some modern music earlier in the evening to going back to 1991 with Main Source.

DJ K-Cut relieved DJ Mensa from the turntables, and Large Professor came out to start things off with “Just Hangin Out.”  I’ve had the pleasure of seeing Large Pro perform years ago as a guest appearance during sets by A Tribe Called Quest and Nas at the 2010 and 2011 Rock The Bells Festivals, but this would be my first time seeing him do his own full set.  This time he would have a special surprise guest of his own, as he brought out Toronto legend Maestro Fresh Wes early in the set!

Maestro got the crowd jumping as he performed his own 1991 track, “Conductin’ Thangs,” which was also produced by DJ K-Cut.  He would then spend the rest of the set at the back of the stage, watching as a fan who had also never seen Main Source perform together.  When Large Professor took over again on the mic, they got right into one of my favourites off of Breaking Atoms, “Peace Is Not The Word To Play.”  They then moved away from that album, performing the single “Fakin’ The Funk” and the Large Professor solo track, “I Juswanna Chill.”

While they did return to the Breaking Atoms album with songs like “Looking At The Front Door” and “Vamos A Rapiar,” much of the set showcased Large Professor’s solo discography from after he left the group.  They took it to 1996 with “Mad Scientist” and “The LP,” and more modern tracks with 2012’s “Key To The City” and of course Large Pro’s 2007 collaboration with Toronto producer Marco Polo, “The Radar.”  Large Pro got to perform at least one song off of each of his solo albums, as they let Nas’ verse on 2002’s “Stay Chisel” play before he slayed his own verse on the song, and even performed 2008’s “Hot: Sizzlin’, Scorchin’, Torchin’, Blazin’.”

Time seemed to just fly by, as Main Source realized they’d gone through most of the set without doing that many tracks off of the album they’re celebrating.  They squeezed a few more of those Breaking Atoms songs into the end of their set, performing the intro track “Snake Eyes,” and “Watch Roger Do His Thing.” Large Professor got really animated during the latter track, rapping about the “Roger” character as if there was an imaginary friend standing next to him on stage.  He then joked about how he didn’t want to offend anyone before performing the anti-police brutality song, “Just A Friendly Game Of Baseball,” explaining afterwards that he originally wrote it just to document the problems people were facing at the time. 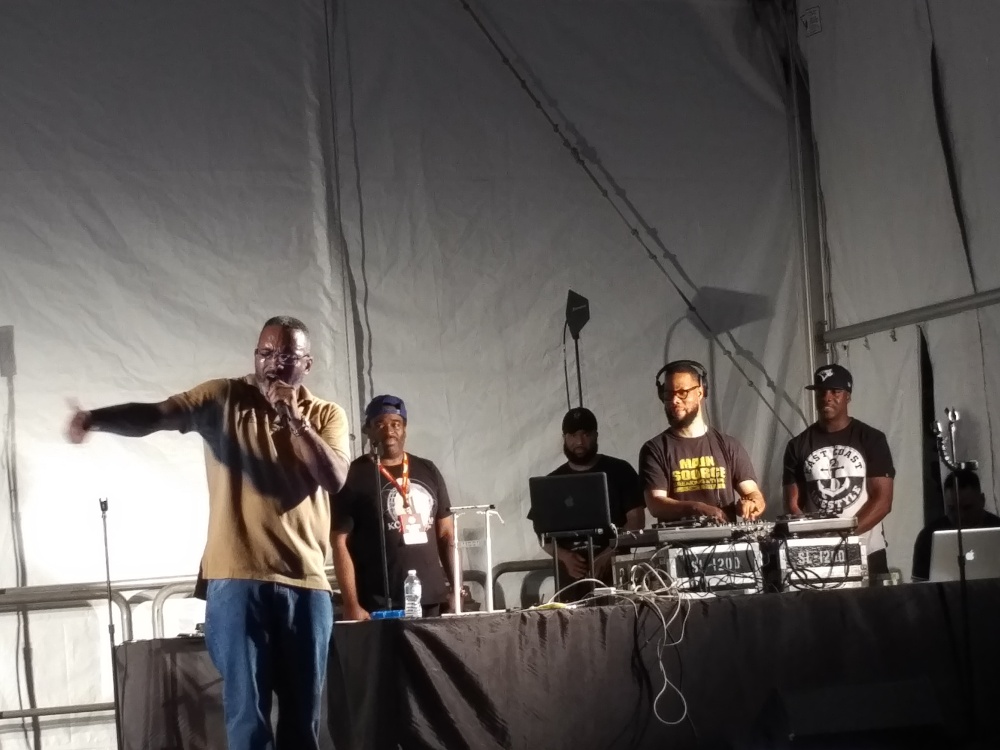 Nearing the end of the set, it was time for that hit everyone knew: “Live At The Barbeque.”  The beat dropped and everyone in the crowd got turned up, jumping and shouting to the hook, and rapping along to Nas’ classic verse.  Maestro and Large Professor went back and forth going through Nas’ lyrics, but then Large Pro decided to cut the song off before the end of the verse and wrap things up with his own track.  They ended with a performance of another Large Pro solo track, “In The Sun,” with the last lyrics rapped into the mic being “24 hours a day, remain classic.”

Large Professor mostly stayed near the DJ booth at the back of the stage during his performance, but after it was over Maestro invited him to come up to the front of the stage for a moment.  He spoke on the impact Main Source and their Breaking Atoms album had on Hip-Hop as well as his own career, and what it meant seeing Large Professor and DJ K-Cut reunited again.  He then got the crowd to cheer for them one last time before shutting down the show.

Unity’s tenth anniversary celebration went down as a fun tribute to a piece of Hip-Hop history.  As a veteran emcee, Large Professor absolutely killed his performance, flowing completely in-pocket with crisp vocals on every track.  You could tell there was slight lack of synergy between the emcee and DJ, but Large Pro and K-Cut worked through it.  The crowd was fun, with some turning up by the stage with Main Source and others keeping the dance cypher going to the side.  Not only does Unity empower the GTA’s youth, but they also continue to educate on all aspects of Hip-Hop culture in a family friendly environment, and it will be great seeing what they can do over the next ten years.