Our second full calendar year being active was a fun one!  We’ve gained a lot of recognition in Toronto’s local Hip-Hop scene, made great connections, and most importantly covered a lot of concerts this year (one more than last year!).  I want to thank all the promoters and local artists who made it easier for me to cover so many shows, all the fans who’ve enjoyed reading the reviews, and all the websites who have supported this blog.  It was a blast covering so many Hip-Hop shows this year, and they were all fun, but only ten of them can make the Top 10.

*All shows were in Toronto, ON, Canada, unless otherwise noted 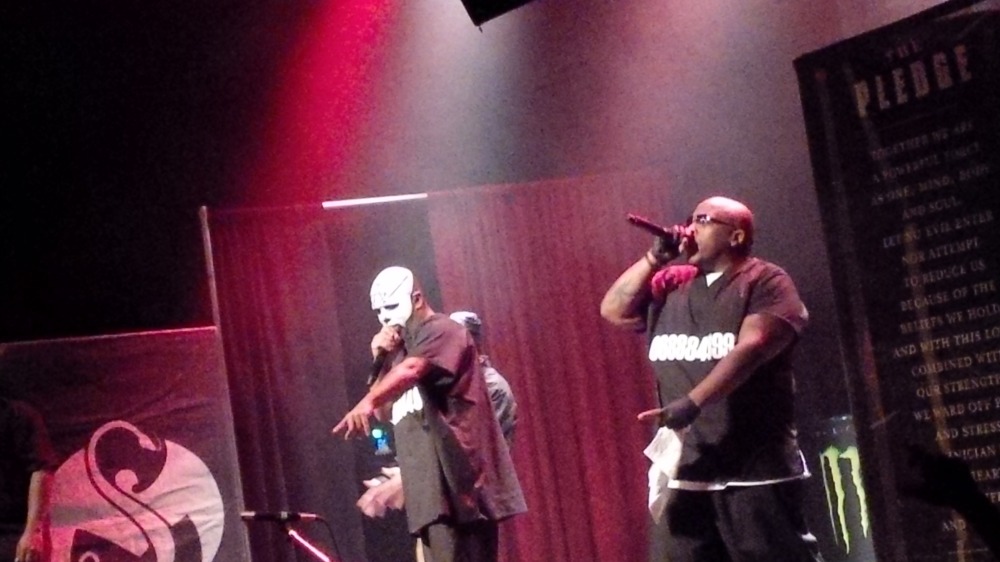 After selling out multiple shows at The Rockpile every time he previously went on tour in Canada, 2015 saw Tech N9ne upgrade to the larger Phoenix Concert Theatre.  With the help of Krizz Kaliko, he’s built a reputation for being one of the world’s most renowned performers, spitting every bar of his raps while controlling the stage with his well-timed choreography.  This one had a real unique showcase of opening acts, both local and from other parts of Canada, and speaking of parts, had the most topless women in the crowd once Tech & Krizz performed songs like “Titties” and “Areola.”  After seeing Tech N9ne perform in each of the past three years, this one seemed standard for him, except he had new music off of his Special Effects album, bringing a fan on stage to rap “Aw Yeah? (InterVENTion)” with him and also doing jams like “No K” and “Hood Go Crazy.”
Read the full concert review here. 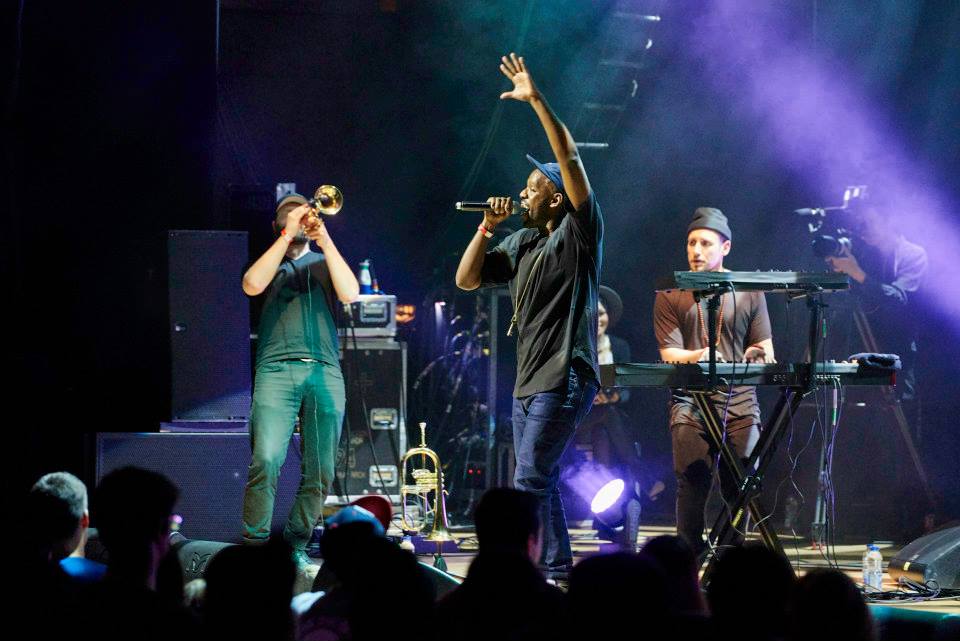 Shad had a huge 2015, starting the year by landing the job as host of CBC Radio’s “q” and having headlining performances at Burlington’s Sound of Music Festival and Toronto’s NXNE Festival.  It could be argued that the outdoor environment of NXNE was more fun, but it’s his show at the historical Massey Hall that takes the cake.  With tickets being sold several months in advance, this special celebration of Shad’s 10th year in the music industry had high anticipation, and it definitely lived up to the hype.  Shad rocked with a live band, even pulling out his guitar to play “Rock To It” at one point, and had surprise appearances from Saukrates and Eternia.  This was the same dope performance we’re used to seeing from Shad, but filling up the large Massey Hall made it all more memorable.
Read the full concert review here. 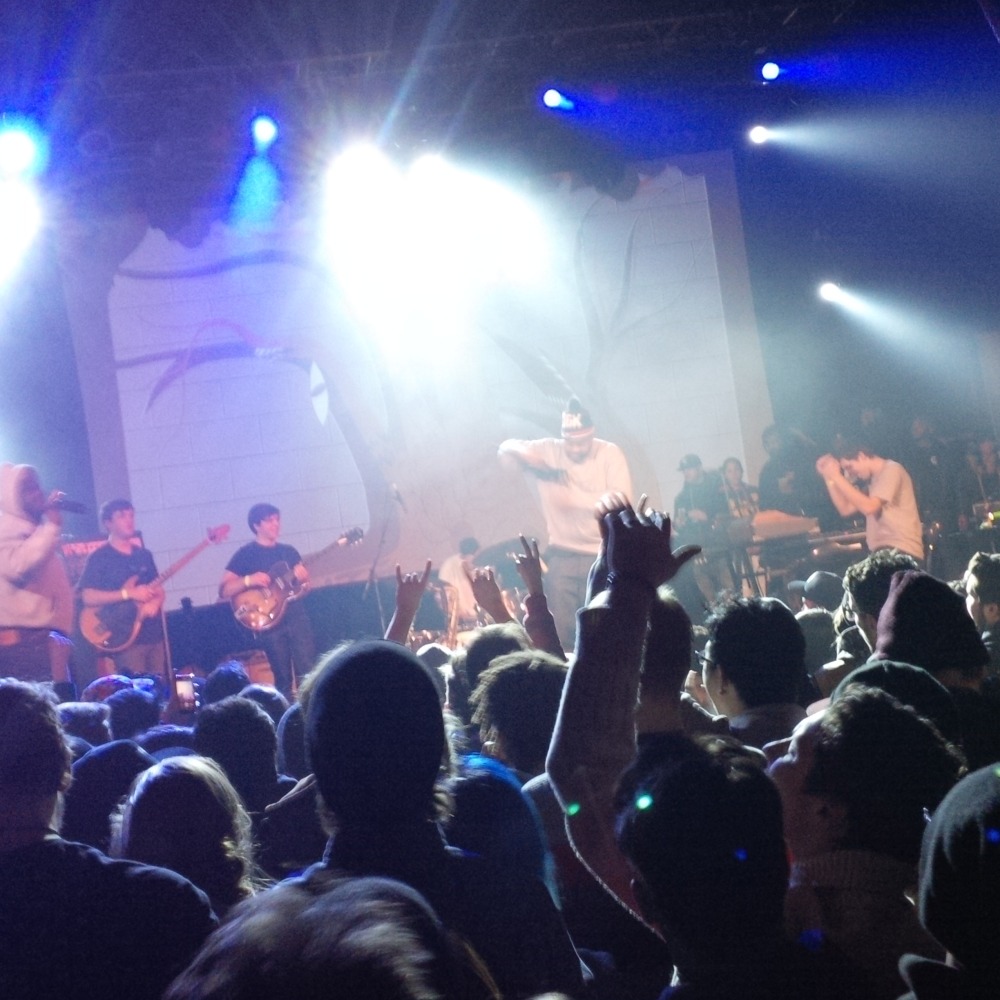 Just like how he released three albums in the span of eight months, Ghostface performed in Toronto three times in six months starting in November of 2014.  While he would later return to this same venue in April with GZA and Cappadonna, it was his show with BADBADNOTGOOD that started the year off right.  This was a free surprise show put on just days before Ghostface and BBNG would release their collaborative album together in February, Sour Soul.  While they didn’t perform any of the new tracks at the time, it was still absolutely epic seeing BBNG recreate classic Wu-Tang beats with their instruments.  Ghostface also has a deep enough catalogue to make the set list for this show different enough from the other shows he did within the six month span around this one.
Read the full concert review here.

7. GZA at The Unity Festival in Dundas Square 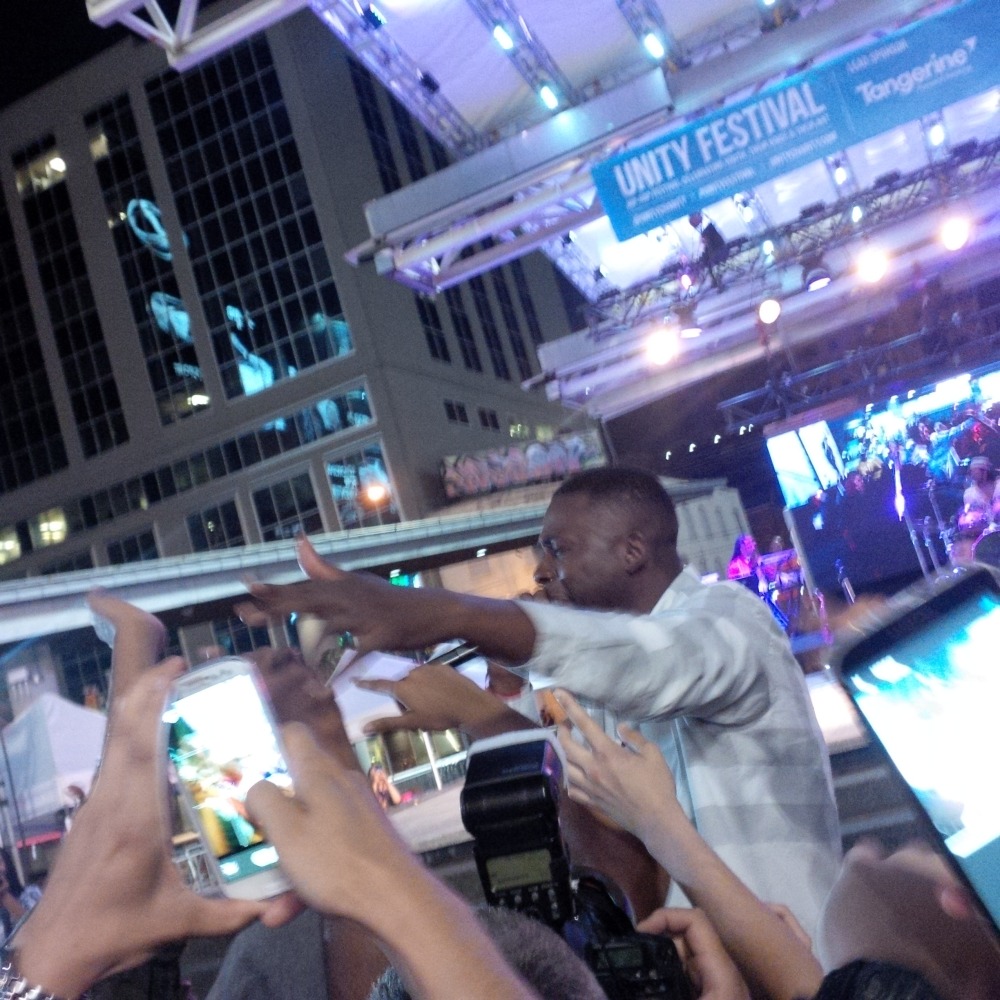 Out of all the many times I’ve seen GZA perform live over the years, this outdoor, free show in the heart of downtown Toronto was the most energized I’ve ever seen him.  He had a live band with him, which made all of his songs so much more energetic, and he even did some breakdancing with a child he had brought on stage at the end of the show, showing that you can never be too old to get down.  He performed songs and verses I had never seen him do live before, and also told cool stories of his late cousin Ol’ Dirty Bastard, as well as the early days recording the Wu-Tang Clan’s first albums.  He even channeled his inner-ODB, whether it was with funny impressions or just hyped chants for his hooks.  It was also nice seeing a young couple get engaged on stage shortly before GZA got on.
Read the full concert review here.

6. k-os at The Danforth Music Hall 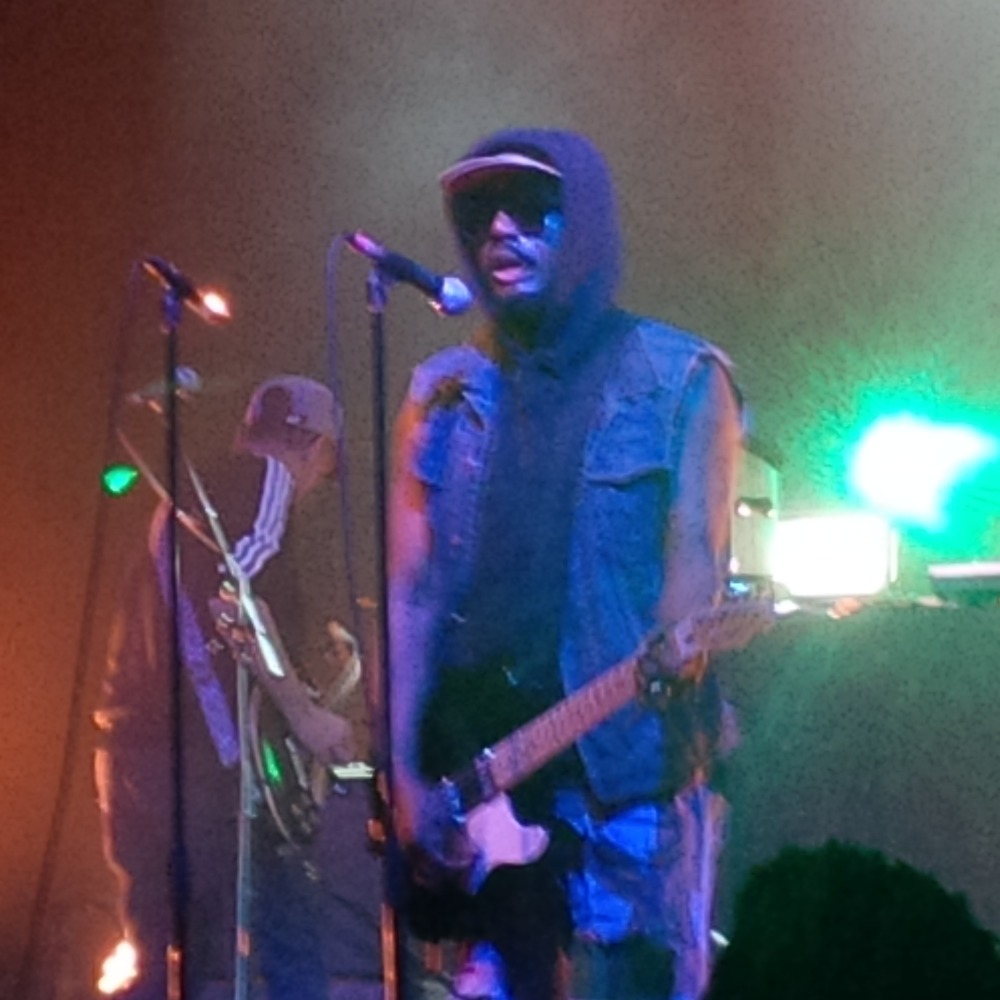 The final show I covered in 2015 was a pleasant evening filled with Rap, Rock and feel-good vibes.  In a celebration of one of Toronto’s legendary MCs, k-os made his triumphant return to the scene playing several of his classics as well as a ton of new songs off of Can’t Fly Without Gravity.  This had the best aspects of both large and small shows, hosted beautifully by The Danforth, as you had loud guitars and smoke machines, but also an intimate enough crowd that the artists could actually talk to.  K-os seemed to have a lot of fun too, playfully covering/mocking Drake’s “Hotline Bling,” giving a Hip-Hop history lesson, and changing his outfits throughout the show.  He can also sing live just as well as he raps, using as many as four microphones for different types of vocals.
Read the full concert review here.

5. System of a Down at The Molson Canadian Amphitheatre 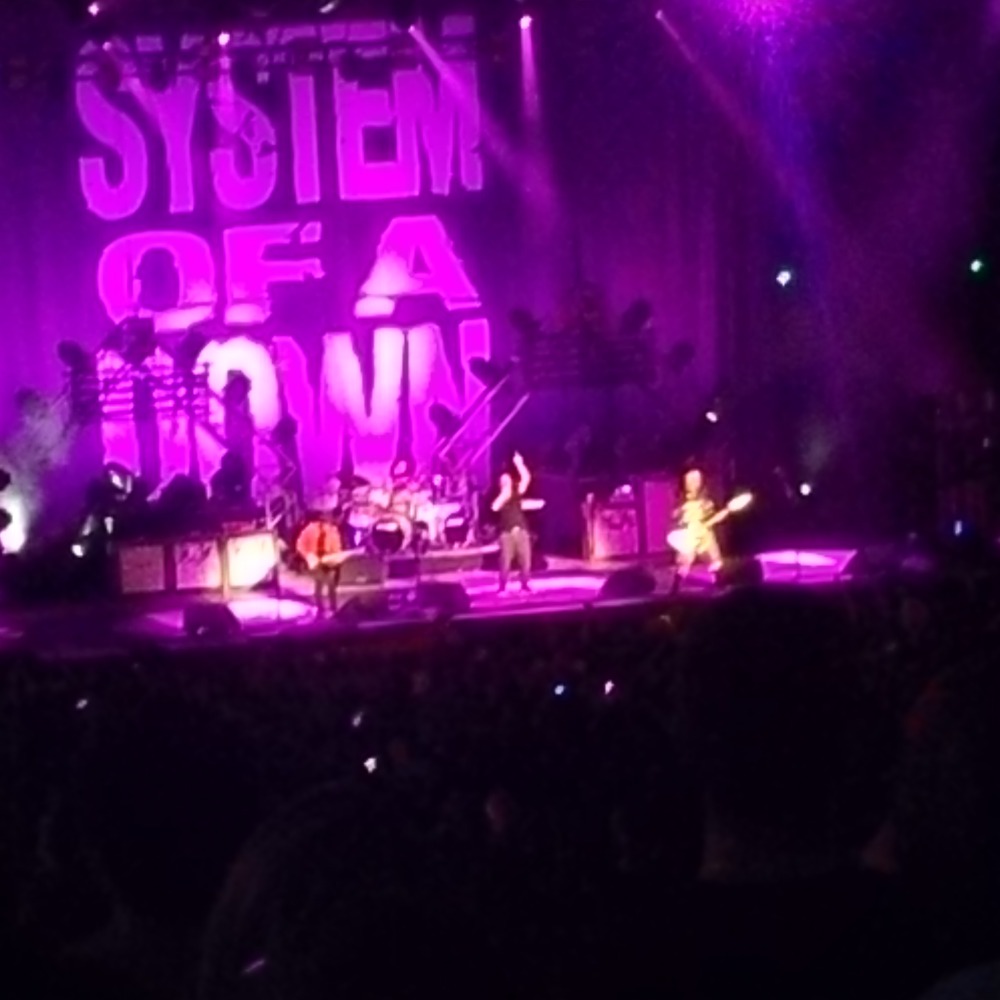 I had to include my token Metal concert.  While they were on tour to commemorate the 100th anniversary of the Armenian Genocide, System of a Down didn’t do much talking and just let their songs speak for them, performing favourites off of four of their five classic albums.  Ten years removed from their last album, they still have awesome synergy together, and the fans got to see everything they love about them.  Slightly more reserved in their older age, Serj still brings tons of energy to his vocals, and Daron’s hilarious sense of humour still shines even with fewer drugs in his system (and he still absolutely slays the guitar!).  This was a really fun show full of nostalgia.
Read the full concert review here. 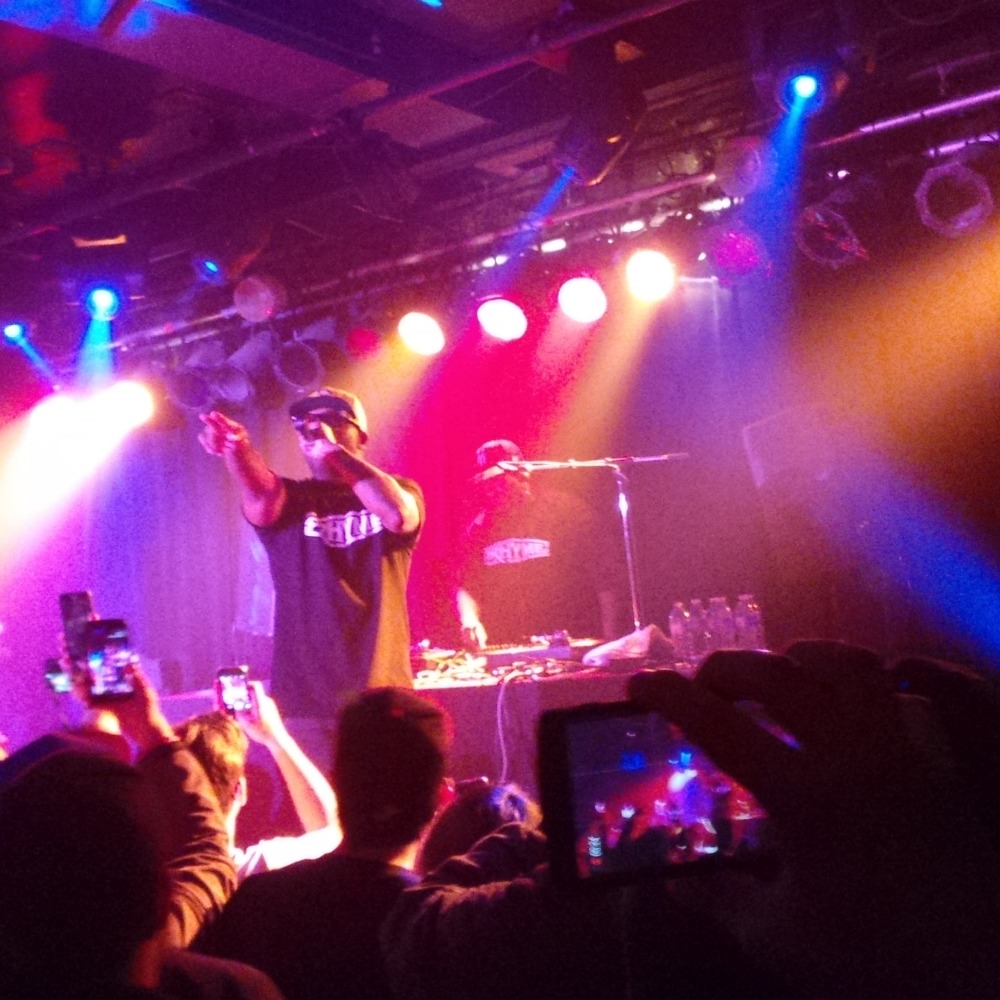 One of the greatest producers and DJs of all time teamed up with one of my personal favourite MCs to create one of the best albums of 2014, and seeing them perform live together was extra special.  It was my first time seeing Royce Da 5’9″ perform, and he proved to be an elite MC, always flowing in-pocket and having minimal use of a hypeman (which occasionally was his brother Kid Vishis).  Not only did they do several tracks off of the new PRhyme album, but they also dove into some classics from Royce’s solo career, as well as his work with Bad Meets Evil and Slaughterhouse.  Having Premo on the wheels of steel was dope too, as he took us on a sampling journey when Royce was off stage, and had great chemistry with Royce when he was on stage.  This was a classic, traditional Hip-Hop show with MCing and DJing at its finest.
Read the full concert review here.

3. ¡Mayday! at The Rockpile 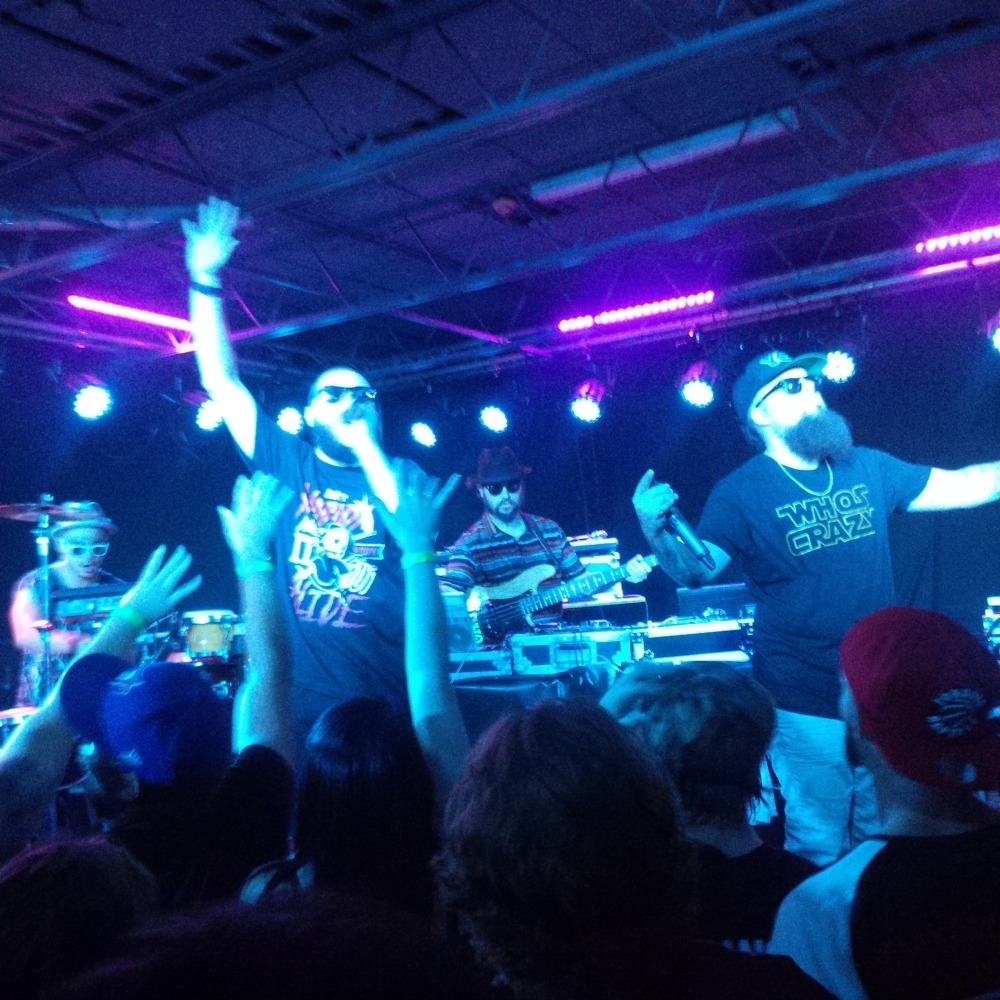 ¡Mayday!’s first ever show in Toronto was an example of that sweet spot when an artist/band has built up a strong enough fan base to tour internationally, but is still a well-kept enough secret so that the shows are smaller and more interactive.  Imagine: these guys released one of my top 3 favourite albums of 2014, and months after this show would release one of the best of 2015, and yet the show was small enough that fans got to meet all the band members afterwards.  Small crowds don’t mean wack shows if you know how to adapt to them, as ¡Mayday! kept The Rockpile turned up, with Bernz even jumping down to the dance floor to rap among the people at one point.  They performed songs off of each of their Strange Music albums out at the time, even going back to their independent work before signing to the label, and had a great combination of live instrumentation, DJing, rapping and singing.
Read the full concert review here.

2. The Roots at PANAMANIA Live at Nathan Phillips Square 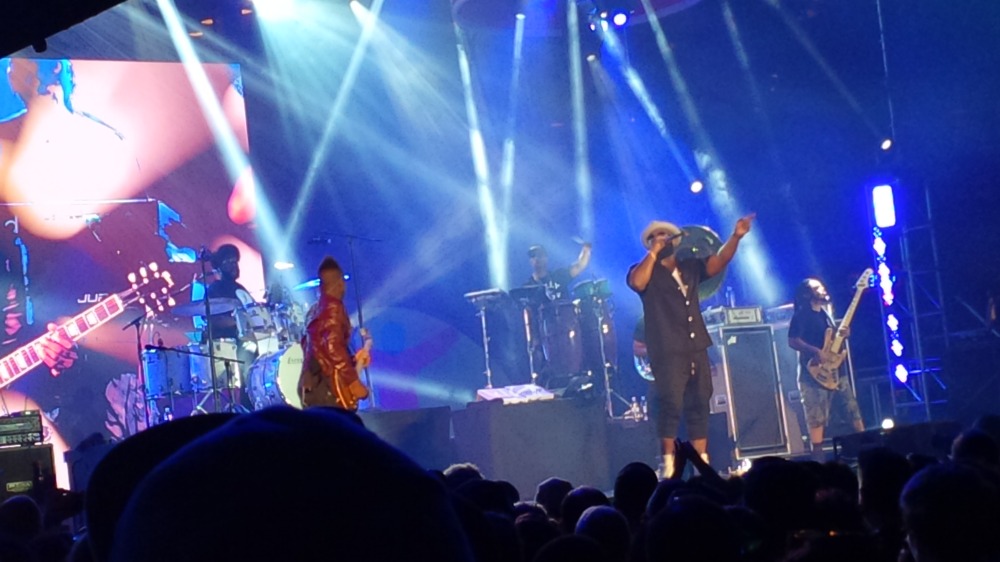 Nearly topping this list for the second year in a row, The Roots gave another epic performance as expected.  One of the many free shows put on outside of City Hall during the Pan Am Games, this one filled Nathan Phillips Square to capacity and brought all kinds of music fans together.  While their 2014 concert at the Luminato Festival saw them focus heavily on their songs from the 2000’s, this show dipped more into the 1990’s, with several songs being performed off of their Things Fall Apart album.  Each band member got to shine with a solo, Captain Kirk’s guitar solo being a major highlight as usual, and the inclusion of Jeremy Ellis on MPC was icing on the cake.  The Roots still hold their reputation as one of the greatest live performing bands of all time.
Read the full concert review here.

1. The Wu-Tang Clan, Atmosphere and Tyler, The Creator at Riot Fest in Downsview Park 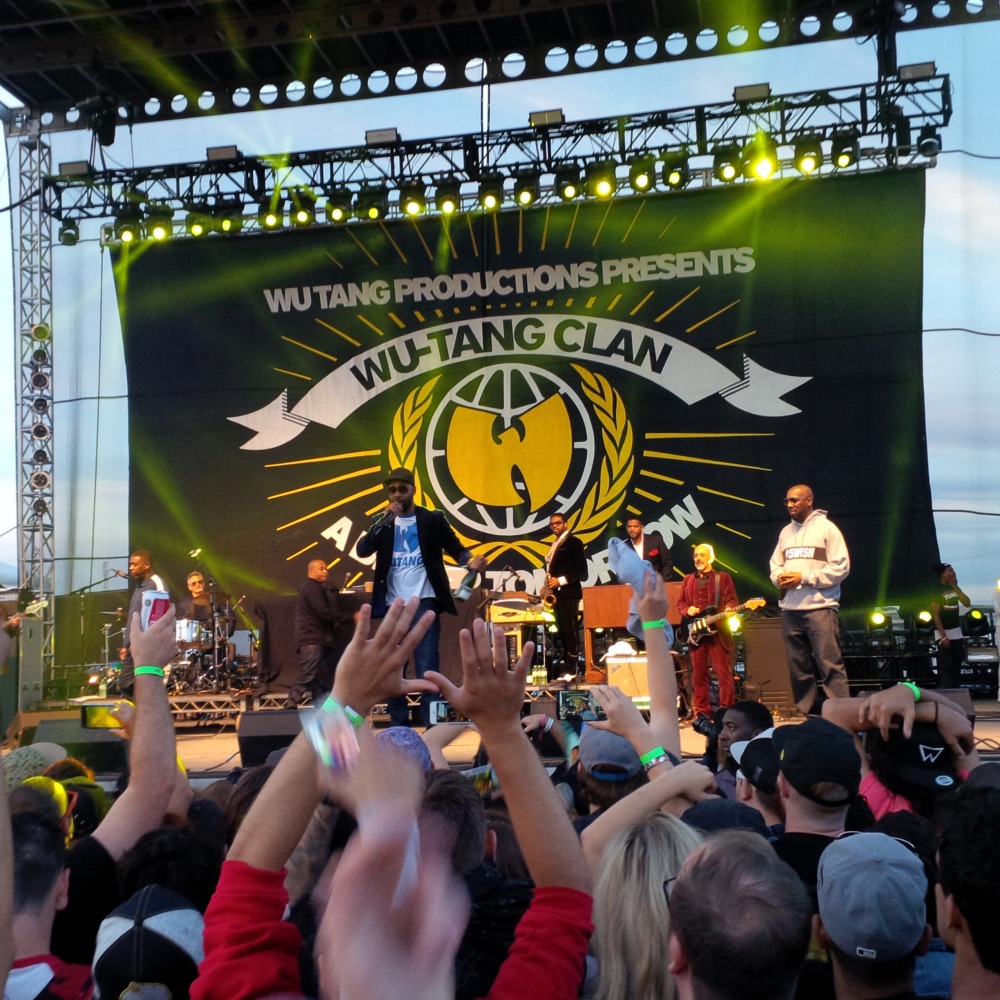 Although it was far from perfect, Toronto’s edition of the 2015 Riot Fest (which had different lineups for Chicago and Denver) easily had the wildest crowd of the year.  There were safe mosh pits, dangerous mosh pits (I saw a poor girl with glasses get elbowed in the nose), crowd surfing, fights, beach balls and beer cans being tossed around, and both men and women going topless.  Punk Rock and Hip-Hop fans alike partied together at this four-stage festival, and the weather stayed sunny during the day and clear in the evening.  Although only about half of the Wu-Tang Clan showed up, it was cool seeing them perform with Adrian Younge’s band, as they performed several classics as well as a couple new songs off of 2014’s A Better Tomorrow.  Even the openers were hype, as Atmosphere celebrated twenty years of running Rhymesayers Entertainment, and Tyler, The Creator had the crowd moshing hard.
Read the full concert review here (via CulturedVultures.com).