This concert was different from the ones I’m used to reviewing.  For one thing, my birthday landed earlier in the week, and so this would be Day 1 of my birthday weekend festivities (Day 2 and Day 3 will also have concert reviews, stay tuned 🙂 ).  This seemed like the perfect way to celebrate my birthday, as it had two of my most favourite things: beer and hip-hop.  Another thing that made this different was that this was a beer festival first and foremost, with artist performances coming as a bonus.  I had never been to a beer festival before.

Toronto’s Festival of Beer is a weekend-long event held at Bandshell Park by Exhibition Place, with over 300 different beers from around the world to taste.  There are several artists of different genres performing throughout the weekend, but the Friday event was clearly for Hip-Hop heads, with Naughty By Nature headlining the show.  Naughty By Nature is one of those legendary Hip-Hop groups from before my time (I would have been two years old when their self-titled debut album was released), but I knew their reputation and listened to all of their albums from the 1990’s over these past few months.  This would be my first time seeing them perform live.

I got to the festival about an hour after doors had opened, with plenty of time to walk about in the sunlight and taste some beer.  Everyone got their own mug to drink out of and started off with five festival tokens, each token being worth half a mug of beer.  Beyond the five that you start off with, tokens cost a dollar each and were being sold in $5 or $20 increments.  This was one of the best parts of the festival, as it meant spending $2 per beer on most kinds of beers (some special ones were double in price), when normally at any bar or liquor store you’d be paying $5-15.

Rather than catching the opening acts, we spent a lot of time walking about the festival, visiting all the tents and trying different beers.  I tried Sam Adams’ Seasonal Summer Lager, some local Canadian beer from Blue Mountain, an Australian beer, an Irish beer, and several others (obviously the reason why I can’t remember them all).  We came across Toronto’s own Steamwhistle section where there were games of Connect-4 and a beanbag-throwing game.  We also checked out a special area dedicated to Ireland, where there was Irish beer and live music.  There was also a huge Budweiser section with EDM music and extravagant lighting, but we simply walked past since Bud can be bought anywhere.

The food was awesome too, as the line for The Dawgfather’s hot dogs stretched towards the stage and was well worth the wait.  One thing that wasn’t so pleasant was the port-o-potty pit in the corner of the festival, although I suppose this should be expected of any high-volume festival.  After several drinks, filling up on food and draining the liquids in the port-o-potties, we made our way to the stage to catch some of the final opening act, a group from Ireland called Hare Squead.

Hare Squead had a live band with them and they rocked the crowd with their EDM-like production and a combination of sung and rapped vocals.  The crowd was still fairly small, with many people just passing through to get to their next beer.  After Hare Squead wrapped up their set, some hosts from Flow 93.5 FM brought some fans on stage for some games.  There was a lip-sync competition that turned into a dance-off between two pairs of girls, and soon afterwards it was time for Naughty by Nature to take the stage. 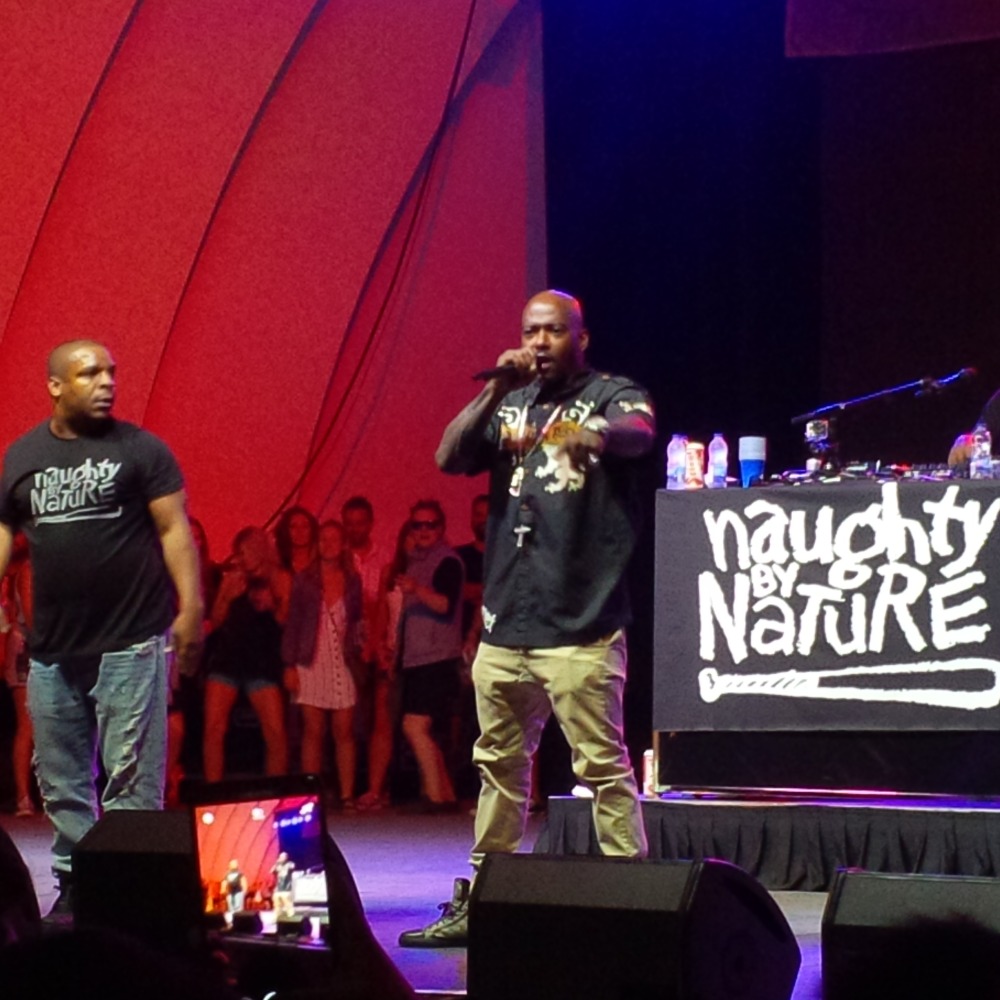 DJ Kay Gee came out and played some classic Hip-Hop before the rest of the group came on stage.  The crowd had all gathered and Kay Gee talked to us a bit to get an idea of who we were; it turns out most of the crowd was born in the 1970’s and 80’s, with a few more born in the 90’s.  Naughty by Nature’s MCs Treach and Vin Rock came out to their classic hit, “O.P.P.,” and immediately got everyone hyped.  They did a few songs I didn’t recognize, but also some classics like “Clap Yo’ Hands,” “Guard Your Grill,” and “Craziest,” giving shoutouts to Toronto and Canada in the hook.

They spent a lot of time playing other artists’ tracks, as the crowd wasn’t necessarily die-hard Naughty by Nature fans but rather beer lovers who like Hip-Hop.  They did DMX’s “Party Up,” Ol’ Dirty Bastard’s “Shimmy Shimmy Ya,” and Snoop Dogg’s “Gin & Juice.”  Treach then paused and looked at his watch, saying they were about to go back in time.  They then took it back to 1991 with “Everything’s Gonna Be Alright” before shooting forward to 1999 with “Jamboree.”  A cat fight broke out during the latter song, as a girl sitting on a guy’s shoulders came back down to the ground level and it’s unclear what happened next.

Naughty by Nature kept the party going with more covers, doing a 2Pac section with “Hail Mary” and “California Love,” a Biggie dedication with “Hypnotize,” and DJ Kay Gee did some scratches around Slick Rick’s “La Di Da Di.”  They then got back to their own music with “Feel Me Flow” off their Grammy award-winning Poverty’s Paradise, and then wrapped up the show with the classic hit “Hip Hop Hooray,” getting an entire crowd to rush the stage for a final surge of energy.  Everyone was chanting the chorus with them and waving their hands.

After Naughty by Nature left the stage, there was still about fifteen minutes before last call, and so we ended our night with our local classic Steamwhistle (the EDM music from the Budweiser section could be heard in the background).  Overall, the Festival of Beer was a really fun experience.  It was kind of overwhelming with all the different options we had for beer selection.  Naughty by Nature’s performance fit the vibe perfectly, although they skipped some tracks die-hard fans would have loved like “Pin the Tail on the Donkey,” “Yoke The Joker,” and “The Only Ones.”  Treach still showcased his supreme skill as an MC though, nailing his rapid-fire flows and controlling the crowd, and there was great chemistry with Vin Rock and DJ Kay Gee.

The Festival of Beer continues throughout the weekend, but I’ll be keeping it Hip-Hop and will have a different concert review tomorrow.  Stay tuned!