Toronto’s Festival of Beer (TFOB) is back with their summer fest, and it may be the dopest Hip-Hop party of the entire summer!  Taking place at Bandshell Park, the festival consists of several beer tents housing brewers from around the world with 416 different beers to sample, a grilling tent featuring world renowned chefs, and several musical performances over the weekend.  While rock band Sloan and Alan Doyle would be headlining the Saturday and Sunday of the festival, Friday would feature a legendary duo who completely embody Hip-Hop in its purest form, Method Man & Redman.

Red & Mef are the reason I started wearing contact lenses instead of glasses to damn near every rap concert I go to.  Whether they’re performing with the Wu-Tang Clan, as solo artists, or as a duo, they are proven to be top notch performers who will always get crowds going wild.   I’ve seen them perform many times over the years (most recently as a surprise at the 2016 Roots Picnic in NYC), but this would be their first time performing together in Toronto since 2013.  Their catalogue is filled with some all-time classics, although each of them have released new solo albums in recent years, with 2015’s The Meth Lab and Mudface.

This would be my first time returning to TFOB since the 2015 festival, which was headlined by Naughty By Nature.  The atmosphere was just as I remembered, with an overwhelming amount of cold beer to sample and walk around with the sun.  It was a lot more crowded than I remembered though, as this sold-out event may very well be the biggest Beer Festival Toronto’s ever had.  You could spot a lot of Wu-Tang logos amongst the crowd, whether it was on shirts fans brought from home, jewellery (shoutout to the birthday girl Cherry), tattoos, or TFOB’s own specially made Red & Mef merch.  There was also a strong love for beer of course, as some people could be seen wearing hats and crowns made out of empty beer cases.

We started off with a Polish lager, and made our way across the festival grounds trying several other craft beers (and of course, memory gets fuzzy).  In between beers we caught some of the first performers to hit the stage, City Natives, who are an aboriginal group hailing from the Maritimes.  While at this point in the day we were more focused on sampling more beer while the sun was still up, the group sounded dope from the little bit of their set that I caught.  They had some sharp rhymes and crisp flows, and you could tell they were cut from the cloth of traditional emceeing.

After some more beers, we made our way back to the stage to see Toronto legend and frequent Red & Mef collaborator, Saukrates.  Big Soxx had a treat in store for the crowd, as he was celebrating the re-release of his 1999 album Underground Tapes this same day, which is now available on streaming services for the first time.  He would tease the hook from the monster track “Now You See Me (2017 Remix),” which my people at AmbrosiaForHeads premiered earlier in the week and features Toronto veterans Kardinal Offishall, Choclair, and Marvel.  While the big star Kardinal didn’t come out for the song, Saukrates would bring out Choclair and Marvel during his set, and it turned into a real homage to Toronto Hip-Hop.

Saukrates’ set moved chronologically, taking fans from the mid 1990’s through to the early 2000’s.  Choclair got to rock a few tracks on his own, and the majority of the set was the two Toronto legends moving the crowd.  They strictly stuck with the throwbacks, getting the crowd to wave their arms to jams like “Tell Em,” slicing through every verse.  With five minutes left of his set, the multitalented Saukrates took some time to bring his wife on stage and serenade her with some singing, and soon it was time to get recharged for the headliners.

After hitting the toilets and getting one last pilsner, we made our way back into the middle of the crowd for one of the most energetic performances of the year. 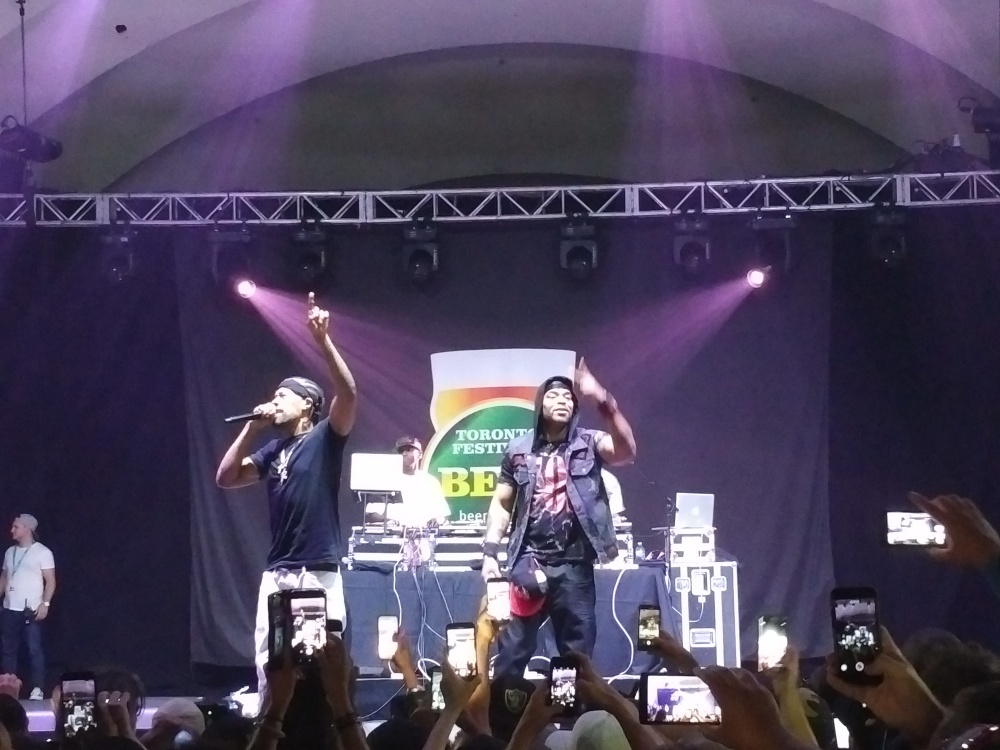 After a short wait, a marijuana mascot brought out Method Man & Redman, and they got things started with the rollercoaster vibes of “Errbody Scream,” cranking the energy up right away.  They told the crowd to (carefully) break through the barricades blocking off a VIP/media area at the front of the stage to maximize the use of space, and broke down their two rules when attending a Method Man & Redman show: (1) you need to have weed (you could see the clouds already forming), and (2) you need to have energy.

Not too long into the set, Saukrates returned to the stage to assist on the 2009 single he collaborated on, “Ayo,” and this is when Red & Mef turned the clock back and dove into some throwbacks.  They got the entire park jumping with Redman’s 1992 solo classic “Time 4 Sum Aksion,” and the Wu-Tang Clan’s 1993 crowd-pleaser “Method Man.”  Rather than perform many tracks off their classic 1999 album together (Blackout!), Method Man & Redman spent a lot of their set performing their solo hits.  Redman went from 1996 to 2001, doing the hook from “Pick It Up” before diving into “Let’s Get Dirty,” and Method Man rocked his 1994 classic “Bring The Pain,” each of them playing the perfect hypeman for the other.

The crowd continued to wild out as Redman rocked a couple high-energy joints off his Doc’s Da Name 2000 album, with “I’ll Bee Dat!” and “Da Goodness,” of course following the routine of getting the crowd to yell “fuck you, Redman!” before diving into the former track.  Next, it was time to mellow out with a couple songs for the ladies.  Method Man performed his hook from “Ice Cream,” and got the ladies in the crowd to sing along to the Mary J Blige chorus on his classic slow jam “All I Need.”

The emcees would then take a break to let their DJs get some shine, introducing one as the man who designed the original Wu-Tang logo, and the other as Das EFX’s original DJ.  They took turns cutting up some LL Cool J samples on the turntables, trying to one-up each other on style points.  They were pulling stunts, scratching the turntables on beat while going behind their backs, taking their shoes off, and even while blindfolding themselves!

When Red & Mef got back on the mics, they got into a How High segment, performing the theme song from their 2001 film, along with some call-and-response chants over the beat from “Cisco Kid.”  They got the crowd to scream if they wanted to see a sequel to the film made, and this led into a performance of the Toni Braxton-assisted “Part II.”  Red & Mef would then do a performance of “Y.O.U.,” which is a prime example of elite emceeing across the board whenever they perform it, showcasing flow, breath-control, enunciation, sharp rhymes, mic & stage presence, choreography, and crowd engagement.

While the earlier part of the set leaned a bit more towards Redman’s solo work, it would now be Method Man’s turn to shine as they took the crowd through a “Wu-Tang 101” crash course.  They started with a tribute to the late Ol’ Dirty Bastard, getting the crowd to rap along with them to “Shimmy Shimmy Ya,” and “Shame On A Nigga,” before Method Man performed his own verse on the latter track.  The crowd would then help Red & Mef perform covers of Raekwon’s verse from “C.R.E.A.M.” and RZA and Inspectah Deck’s verses on “Wu-Tang Clan Ain’t Nuthing Ta F’ Wit.”  Red & Mef then took some time to reflect on how Wu-Tang has been around for 25 years, and Redman has been around for “20 thousand” years, and they’re still able to perform in front of massive crowds like this; they were humbled.

The crowd would get to turn up one last time, as Method Man & Redman did their familiar routine where they got everyone to scream as loud as they could for as long as they could, as the beat for their classic “Da Rockwilder” kicked in.  They each slayed their verses, although neither of them stage-dived like they used to back in the day (maybe the extra barricades made it too dangerous).  Either way, the crowd got as energetic as it had been all night, but there was still some fun to be had.  Red & Meth decided to end the show on a groovy note, getting the crowd to dance as they covered The Sugarhill Gang’s 1979 hit “Rappers Delight” (sidenote: Mef was rocking a shirt that had “70’s” written across the front).

This was the end of the set, but while Method Man left to go backstage, Redman stayed to spend some extra time with the fans.  With the help of his DJ, he started selling CDs of his 2015 Mudface album for $20 a pop, right from the front of the stage.  The demand was so overwhelming that he sold off his last six copies to the highest bidders, some going as high as $60, and even a bag of weed was offered.  He then spent even more time signing autographs on those CDs, his merch, and even on the commemorative beer mugs from the festival.  By the end of it, he must have given at least an extra half hour of his time to the fans.

I’ve noticed in recent years that Method Man & Redman have become slightly more reserved performers.  The hype, energy and chaos is still there, but they look out for their fans more than ever now, doing things like pausing the show to make sure a passed-out fan gets carried to security safely.  It’s an interesting time, seeing Hip-Hop and its artists get old for the first time, but performances like this show that it’s aging gracefully.

Overall, Toronto’s 2017 Festival of Beer opening night may have been the most epic event they’ve had yet.  The atmosphere and the vibes were beautiful as usual, but the artists they got to perform really took things to the next level, and it will be interesting to see if/how they’ll be able to top themselves next year.  They’ve proven time and time again to be the ultimate summer event for combining the love for beer and for classic Hip-Hop, and this year was no different.  Beer Fest continues this weekend at Bandshell Park, but will shift its focus to rock music; be sure to check it out if that’s your vibe!