Following Naughty By Nature’s performance at The Festival of Beer the previous night, the Unity Festival would be Day 2 of my birthday weekend festivities.  While I missed out on last year’s festival, I did attend their 2013 free concert in Dundas Square, when they had Talib Kweli headline.  The Unity Festival is put together by Unity Charity, a non-profit organization that engages youth in the GTA via their school and community programs to create positive role models.  While they put on several ticketed events and workshops focusing on the Hip-Hop elements of beatboxing, breakdancing and spoken word/MCing throughout the week, they wrap up the festival with a free Hip-Hop concert in Dundas Square.

This 2015 edition of the festival would feature local artists including Rich Kidd, a Mississauga MC/producer who I’ve seen perform several times, including the 2013 festival, and The Airplane Boys, a group from Scarborough who I’ve only heard of by name.  The show would be headlined by The Wu-Tang Clan’s GZA, a/k/a The Genius, who I’ve seen perform several times in various scenarios (solo, with the entire Clan, and with different mixes of select Clan members).

GZA was just in Toronto this past April, when he rocked The Opera House with fellow Clan members Ghostface Killah and Cappadonna.  The last time I saw him perform truly solo, without any other Wu-Tang Clan members, was in 2012 when he performed his entire Liquid Swords album at The Sound Academy.  That is unless you include the time he gave a lecture at the University of Toronto in 2013.  GZA headlining this particular show was very fitting, as he has been passionate about engaging the youth, implementing programs which use Hip-Hop to teach science in various high schools, and speaking at several universities. 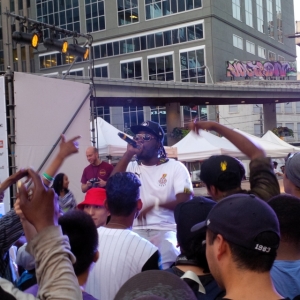 I made it to Dundas Square with only about three hours left for the festival.  There was a really dope beatboxing duo on stage who rocked some Justin Timberlake vocals over some EDM-type beats, all made with their mouths.  Shortly afterwards, Scarborough’s own Airplane Boys came out and rocked the square with some fast-tempo raps.  They made sure to come right up to the barricade between the crowd and the stage to get people involved.  There were some prize giveaways between sets and a dope dance crew from Waterloo, ON before the next big opener.

Mississauga’s own Rich Kidd began his performance in the middle of the crowd, slowly working his way to the stage before beginning an actual song from the barricade.  While Rich Kidd only performed three songs, his set was energetic and eventful, as he repeated a segment from the 2013 festival where picked a child in the audience to crowd-surf with him during the final song.  After Rich Kidd’s set, the entire Unity Charity crew who worked on putting this festival together all came out and each did some breakdancing as they were introduced.  While this was familiar from the last time I attended the festival, a unique, special moment came when one of the crew proposed to his girlfriend with Method Man’s “All I Need” playing in the background, and she said yes (apologies for not being fast enough to get a picture)! 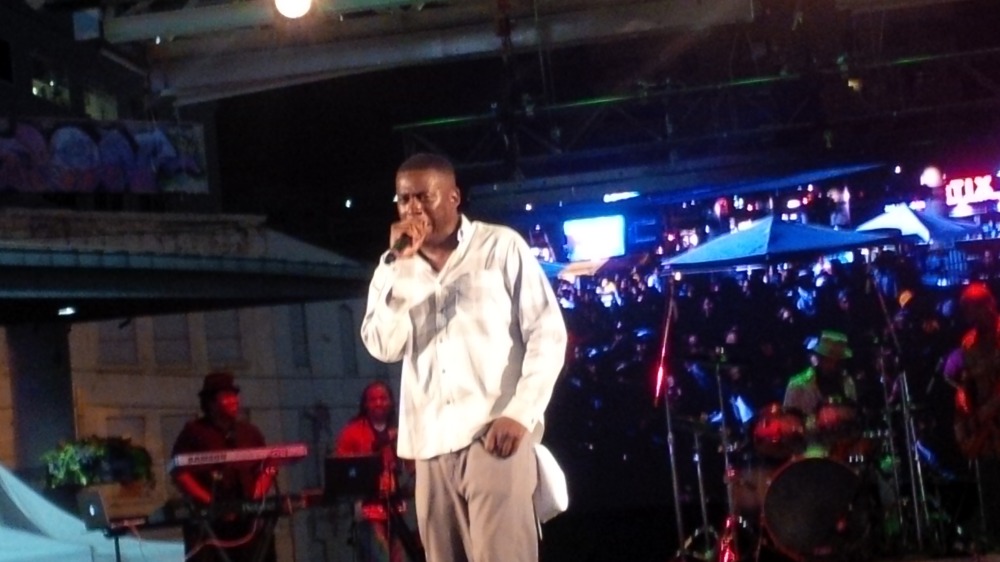 Pretty soon a live band set up on stage, a standard rock band plus a keyboardist and a saxophone player, and the intro from the beginning of Liquid Swords began to play.  Once the skit ended, the band began rocking out, and GZA started his set with “Duel of the Iron Mic.”  The live band immediately brought so much more energy than anticipated, and GZA was more hyped than I had ever seen him as he covered Ol’ Dirty Bastard’s energetic chorus, along with Masta Killa and Inspectah Deck’s guest verses on the track.  This then transitioned right into “Gold,” and the rock vibe remained prevalent.  GZA continued performing various tracks off that Liquid Swords album, with some of my favourite cuts including “Living In The World Today” and “Labels.”

My mind was blown away a this point by how the live band made these normally laid-back tracks so much more energetic.  GZA was turned up too, as he made a comment on how more people seem to show up to paid venues than free, outdoor festivals.  He seemed distracted by the non-festival-goers just walking past the mall in the background.  The band continued with “Cold World,” “Shadowboxing” (GZA did both his own and Method Man’s verses), and a really dope version of “4th Chamber” where the guitar stood out and GZA got the crowd chanting “Wu-Tang Clan ain’t nuthin’ ta f*** with!” as a placeholder for a chorus.  It’s also worth noting that GZA himself didn’t curse during his set, but he set the crowd up nicely to shout certain phrases.

The crowd started a “Wu-Tang!” chant between songs, and so GZA performed his solo track off of the Clan’s Enter The Wu-Tang (36 Chambers) album, “Clan In Da Front,” doing both verses.  He then came up to the barricade to talk to the crowd and allow fans to take some selfies with him, and then he brought a child in the audience on stage to breakdance as he performed some deep album cuts.  He moved on to his Beneath The Surface album with the high-energy track, “Crash Your Crew,” running up to the crowd and getting everyone to shout Ol’ Dirty Bastard’s chorus.  He also did a rare cut off Legend of the Liquid Sword which I’ve never seen performed live before, “Animal Planet,” as he sat down on the steps to rap the last verse and the kid kept breakdancing on stage behind him.

Next, GZA got into some Wu-Tang Clan cuts, with some verses I had never seen him perform in all the shows I’ve been to, and other familiar covers.  The band played the instrumental from Raekwon’s “Criminology” which sounded especially nice with the saxophone, and GZA spit a freestyle over the beat.  They also performed “C.R.E.A.M.,” with GZA covering both Raekwon and Inspectah Deck’s verses, and he surprised me by performing both Deck’s verse and his own verse from the vintage “Protect Ya Neck” (I’ve always seen this song get cut off after ODB’s verse).  Of course, GZA did a tribute to his late cousin Ol’ Dirty Bastard, mimicking some of his vocals (a hilarious moment in the show) before the keyboardist played the iconic notes from “Shimmy Shimmy Ya” and they got into the cover.

GZA returned to his solo classics with the title track “Liquid Swords,” which sounded especially nasty with the live guitar.  After doing both verses, he talked to the crowd and told the story of how him and RZA came up with the chorus (apparently it had already been twelve years old in 1995), and the band kept playing until he got everyone jumping to the chorus one last time.  GZA closed out the show by covering Inspectah Deck’s iconic verse from “Triumph” as well as performing his own verse, again using “Wu-Tang Clan ain’t nuthin’ ta f*** wit!” as a placeholder for a chrous.  He then joined the kid he had brought on stage, who had been breakdancing this entire time, and actually pulled off some breakdance moves of his own.

My birthday weekend continues with another Hip-Hop concert review tomorrow, stay tuned!  And shoutouts to everyone who complemented me on my GZA logo t-shirt, I copped it at that last show he did in Toronto back in April 🙂