It’s hard to believe it’s been almost five years since Kendrick Lamar performed in Toronto.  The last time he was here was in 2013 opening for Kanye West on The Yeezus Tour, at a time when he was just starting to break ground on a mainstream level with his major-label debut album, good kid, m.A.A.d city.  He’s come a long way since then, dominating the charts and award shows with his sophomore album, the politically driven To Pimp A Butterfly, and most recently releasing the most popular rap album of 2017, the double-platinum-certified DAMN.  Kendrick Lamar’s star power has grown exponentially since the last time he was here, as he has now become one of the most well known and respected Hip-Hop artists of today, returning to Toronto on the biggest tour of his career with two of his own headlining shows at the Air Canada Centre.

While some Toronto fans may have made the trip to see Kendrick co-headline the first annual WayHome Festival up in Barrie in 2015, many have been starved to see him perform live.  It’s no surprise that this show was sold out within minutes of tickets going on sale, with many fake fans taking advantage of Kendrick’s popularity by buying tickets and immediately putting them up for resale at a hefty premium.  It was frustrating trying to get into this show at a fair price, which is why Kendrick will be returning in August for a second show. 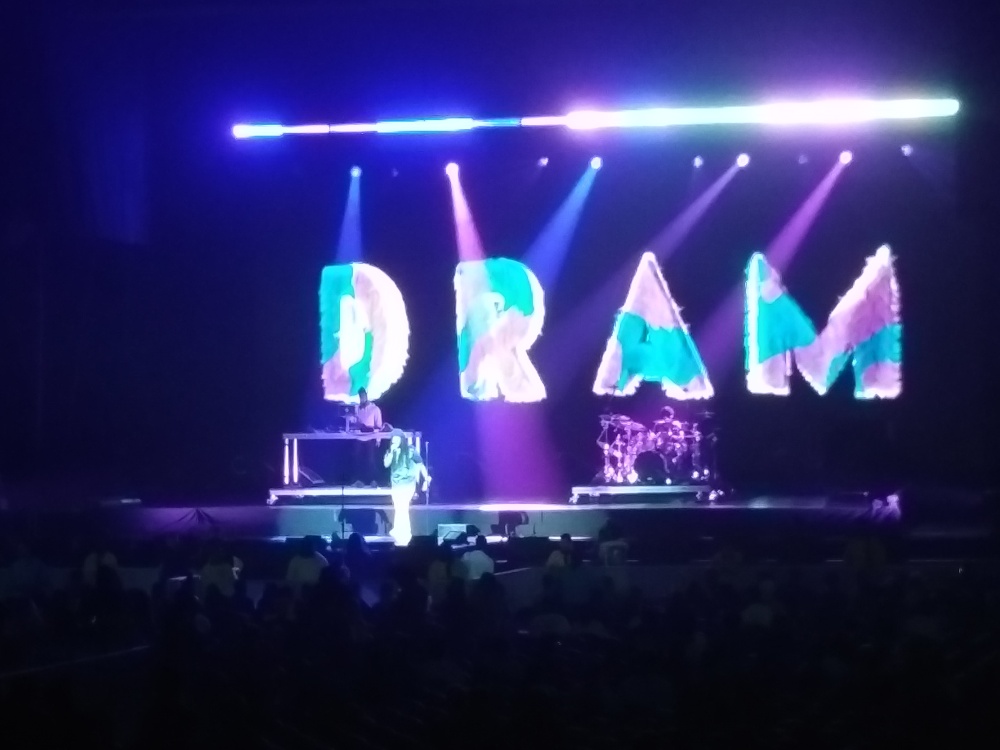 For this leg of the tour, the artists opening for Kendrick would be D.R.A.M. and Travis Scott, neither of whom I’m very familiar with.  First up to perform would be D.R.A.M., who I’ve only heard in a barely noticeable guest appearance on the new Gorillaz album, Humanz.  We got to the ACC early and walked right past the long lineup of fans buying $50+ t-shirts to find our seats, shortly before he hit the stage.  He came out with the huge screen behind him playing animations of girls dancing, along with a DJ and a live drummer backing him, as he hit the crowd with some soul and funk flavoured vocals.

The building was still slowly filling up, but the fans who came early got to party to some groovy dance tunes.  D.R.A.M.’s style of music kind of reminded me of Chance The Rapper in a sense that he sings most of his vocals but will occasionally spit a rap verse.  He got the crowd dancing to his funky style of Hip-Hop, and his half-hour set was a solid warm up for what was to come.

Next up was Travis Scott, who I went into this show not being a fan of whatsoever, despite the large amount of success he’s had in recent years.  I’ve heard him featured on some Kanye West projects and a couple of his solo singles, but never heard one dope bar or verse that made me want to check out more of his music.  I learned quickly that dope rapping is not his appeal at all, as his music is all about the energy and the general vibe rather than any lyrical substance.  He came out spitting some autotune-heavy mumble raps, but the crowd was into it and the energy in the building got cranked up!

The crowd grew quickly as Travis Scott went through a medley of his hits, getting everyone to bounce to his bass-heavy beats and shout the lyrics with him.  I didn’t know any of his songs other than a cover he performed of Kanye West’s “Father Stretch My Hands Pt. 1,” but I could appreciate the energy he put into his performance.  He had the jumbo screen playing animations, smoke machines going off, and hard hitting beats to get the crowd moving, but the most epic was yet to come.

Shortly into his set he brought out a special guest just for Toronto: Baka, who’s signed to Drake’s OVO Sound.  I had never heard of him before this show, but he brought a similar energy to the stage as Travis.  Travis would then really show off the big budget on this tour, as he got onto a mechanical hawk and rapped while floating over the crowd, similar to Kanye West’s Saint Pablo Tour.  He would go on to perform the majority of his set from atop the hawk, with a dope light show going on behind him and the crowd going wild below him.

Travis would occasionally talk to the crowd whenever there was a scuffle with security, getting everyone to calm down before proceeding with the mosh pit-inducing performance.  The ACC was packed before he came down from the flying hawk, and he had the building shaking with the way he got the crowd jumping.  It was a solid one-hour set, and while the overuse of autotune made it hard to understand most of what he was saying, he definitely pumped a ton of energy into the crowd.  It was hard to tell at this point if the crowd would be able to top that energy for the man we all came to see, Kendrick Lamar. 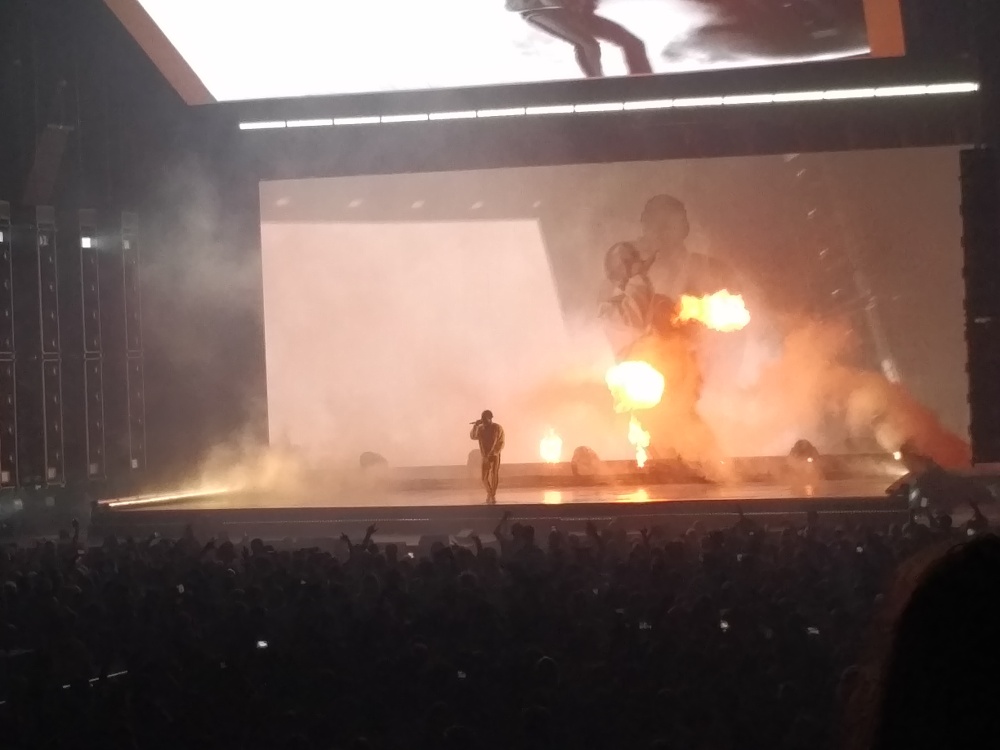 Kendrick Lamar’s set began with a short video establishing the Kung-Fu Kenny persona he took on for his new album, showcasing him performing some “turtle-style” martial arts.  Some pyrotechnics went off and Kendrick came out exactly how a lot of fans wanted him to: with a small taste of the intro off the new album before diving right into the high-energy single “DNA.”  It was a near perfect way to start the show, as the beat-change midway through the song saw an actual martial artist come out for some katas choreographed to the music, while Kendrick almost ripped through his rapid-fire verse (he left some gaps for the fans to shout out).  He then moved on to another single off the new album, “Element,” with flames shooting up behind him as he rapped.

Kendrick wasted no time making up for the years he’s been away, getting the crowd to dance to the 2015 hit “King Kunta,” along with some tracks off his 2016 untitled unmastered album, including part of “Untitled 07” and “Untitled 02.”  He then performed some of his guest verses on other artists’ songs, with Future’s “Mask Off” and Schoolboy Q’s “Collared Greens,” getting the crowd to bounce to the up-tempo beats.  There was a pause as he took some time to talk about how Toronto was one of the first cities to really support his music, before getting into a couple throwbacks off his classic good kid, m.A.A.d. city album, with the original single version of “Swimming Pools (Drank)” and the first two verses of “Backseat Freestyle.”  Next, he went back to his DAMN album with the Rihanna-assisted “Loyalty,” the crowd helping to rap and sing her parts of the song, followed by a quick interlude.

Kendrick left the stage as his martial artists took over with a choreographed fight, with the beat from “Feel” playing in the background.  I initially thought it was strange for a high-energy rap concert like this to have assigned seating on the floor level, but then the interlude ended and Kendrick appeared on a small stage in the center of the arena, and it became clear this was necessary for him to maneuver between stages.  The center stage rose and formed a lit-up cage around Kendrick as he crouched and performed the mellowed-out “Lust.”  Eventually the stage lifted Kendrick to the top of it, and he brought the energy levels back up with a performance of the classic “Money Trees,” getting the crowd to sing along with him.

There would be another interlude video with a fight between “turtle-style” and “snake-style,” giving Kung-Fu Kenny some time to return to the main stage for a high-energy performance of “m.A.A.d. city” and “XXX.”  The large screen above Kendrick turned down to be completely horizontal, shining a light over him as he ripped through his rapid-fire verses on these two songs.  After getting the crowd bouncing to the up-tempo tracks, Kendrick let the martial artists take over the stage with a choreographed fighting interlude.  The lights went black with the screen returning to its original position, another video interlude played before Kendrick re-appeared on stage with one of his kung-fu artists holding him up horizontally by the arm, where he would hang and mellow out the crowd.

Hanging sideways, he performed the new songs “Pride” and “Love,” eventually returning to his feet mid-verse and getting the crowd to light up their cell phones and lighters.  He kept things in a mellow vibe with the throwback “Bitch, Don’t Kill My Vibe,” getting the crowd to sing the familiar hook with him, before cranking up the energy again.  The crowd got as loud as they had been all night as he tested which side was the loudest, and followed up with the Grammy award-winning To Pimp A Butterfly single, “Alright.”  After one last video interlude, this time a more romantic one, Kendrick got into another high-energy performance of one of the biggest singles of 2017, “Humble.”

The crowd knew every word to the song, eventually rapping an entire verse for Kendrick as he cut off the beat.  He then paused and stood center-stage, humbly taking in the moment as the crowd chanted his name.  After recording a video with a fan’s cell phone and thanking the entire crowd, he then closed out the show with a second performance of “Humble,” this time rapping the entire thing and putting his all into the performance before leaving the stage.  Of course the crowd chanted for an encore, and Kendrick happily obliged, returning to perform one last song off the DAMN album, “God.”

Kendrick Lamar’s first time headlining at the Air Canada Centre was as epic as you’d expect, given the rapid success he’s had in recent years.  The building was packed from top to bottom with energetic, hyped up fans who loved every minute of the performance.  You could tell Kendrick learned a lot from touring with Kanye West all those years ago, as he had an elaborate stage design and thematic set list similar to what Kanye may have come up with given his style of music.  This show was all eyes on Kendrick, as the live instrumentation could be heard but not seen, and the only ones to join Kendrick on stage were the choreographed martial artists.

It was surprising to see Kendrick only perform two songs off of To Pimp A Butterfly, since he never performed in Toronto when touring for that album.  He also didn’t even touch his Section.80 album for the day-one fans, but he still had a great balance between his classic throwbacks and the new songs off of DAMN.  The DAMN Tour continues through North America all summer, and will return to Toronto for a second show on August 23rd.