Lorde is currently experiencing the biggest years of her career to date, with her sophomore album Melodrama earning her an Album of the Year Grammy nomination, and her subsequent world tour taking her to stadiums and arenas around the globe. It’s been about four years since she last performed in Toronto, at the Danforth Music Hall, and so taking on the Air Canada Centre would be a big step. Joining her on the North American leg of the tour would be a group also performing for the first time at the ACC after rocking the Danforth Music Hall last year, Run The Jewels. The pairing between the hardcore hip-hop duo and the pop megastar looked odd on paper, but before embarking on the tour, they teamed up to release the El-P remix of “Supercut,” and I was immediately sold.

While I didn’t know much about Lorde going into this show, it’s been an epic journey watching Run The Jewels start off in the tiny Hoxton Nightclub when Killer Mike & El-P first formed the duo, and gradually filling up bigger venues until finally reaching the ACC. There hasn’t been a Run The Jewels show in Toronto that I’ve missed, and while I knew this set list would be a bit watered down for the pop fans, it was still a milestone I wanted to witness. The arena was still slowly filling up as rock singer Mitski performed a quick 20-minute set with her band, but a decent crowd accumulated by the time RTJ hit the stage. 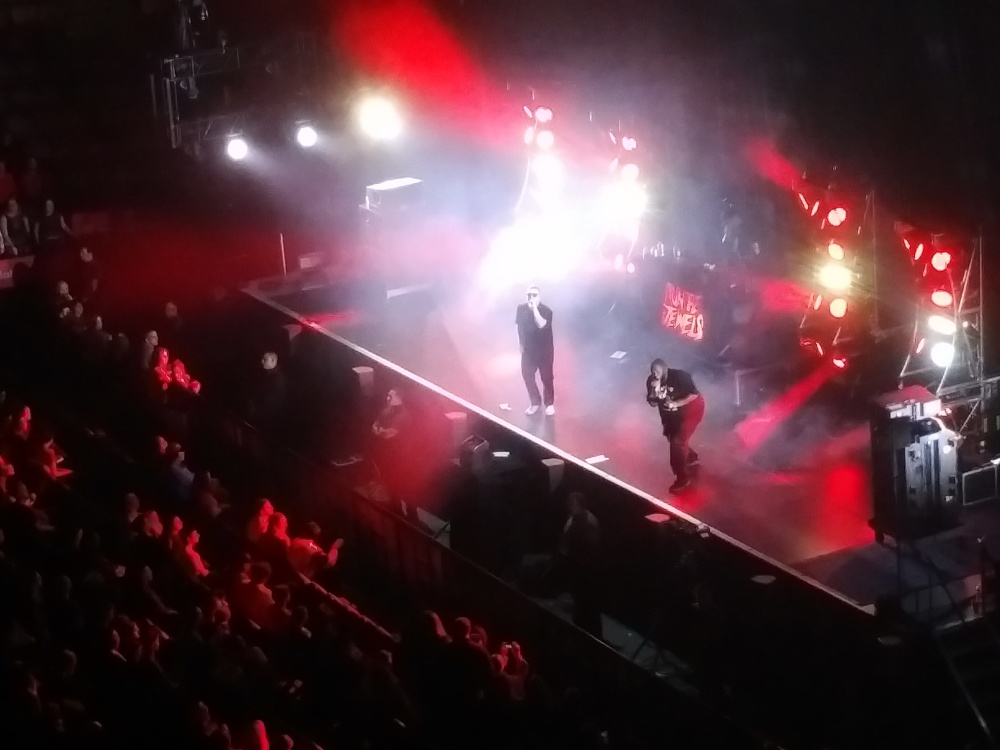 As per usual Run The Jewels fashion, DJ Trackstar played Queen’s “We Are The Champions,” and Killer Mike & El-P gave a quick shoutout to the currently conference-leading Toronto Raptors before proclaiming “we’re here to fuck this stage up!”. They did exactly that, as they got into hits off their latest RTJ3 album with “Talk To Me,” “Legend Has It,” and “Call Ticketron.” While not all the seats were filled in the arena yet, the fans who were in the building were turned up, chanting along to the “R-T-J!” bridge in “Legend Has It,” and clapping along to the beat on “Blockbuster Night Pt. 1.” While the energy was cranked, the assigned seating made it impossible for a mosh pit to break out, so it wasn’t quite the same as previous Run The Jewels concerts.

The raw energy and raging Run The Jewels are known for may not appeal to all pop fans, but they were able to play to the crowd by talking to them between songs, dedicating their song “Stay Gold” to all the ladies. They went for some real heart to heart moments, performing “A Report To The Shareholders” before doing a dedication to anyone who ever lost someone with “Thursday In The Danger Room,” which I had never seen them perform live before. Mike then gave an inspirational speech to the youth in the crowd, telling them that life is going to hit them hard, but that suicide should never be an option. They then closed out their set with “Down,” getting the crowd to light up the arena with their cellphones. 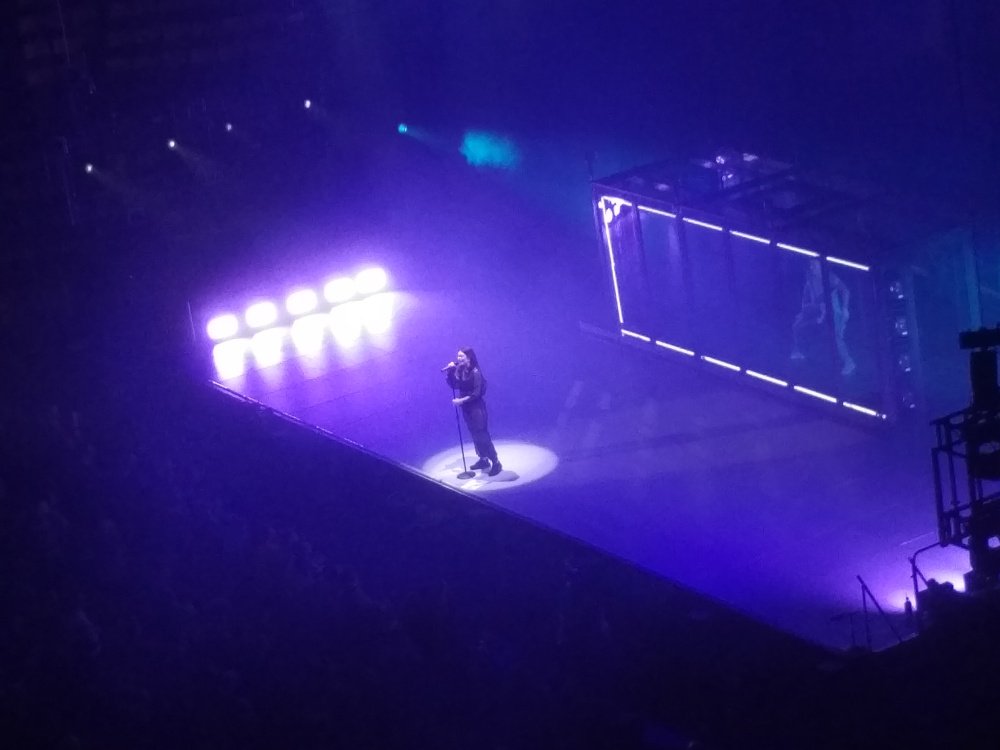 The stage was prepped for Lorde’s set, and she got things started with the Melodrama song “Sober.” Rather than coming out immediately, she performed the first half of the song in the dark, wearing a black dress so you could only see her silhouette, as her group of dancers took the main spotlight in front of her. The crowd erupted when the spotlight finally shined on her, as she joined her dancers and continued with “Homemade Dynamite.”  Lorde would also give a quick shoutout to the Raptors before claiming the ACC as her house, and getting everyone to dance to some of her throwbacks off her debut album, Pure Heroine.

She got back into the new album with “The Louvre,” with her dancers now in a transparent box at the back of the stage. Lorde would eventually go inside that box to change into puffy “marshmallow” dress (as she later described it) in front of everyone, before coming back out to do some of her slower songs. She performed “Hard Feelings,” explaining a really specific moment after a break-up that the song is about, and continued with “Writer In The Dark.” The box behind her would rise into the rafters with a dancer inside it, tilting to keep the dancer off balance and depict the struggle Lorde was singing about.

During this tour, Lorde has improvised some accapella covers of other artists’ songs into her performance, doing a different cover in each city (one that’s gone viral was her Kanye West “Love Lockdown” cover in Chicago). For Toronto, she decided to perform what she called an “old song,” pulling a deep cut from Drake’s Take Care album with “Shot For Me.” With the box now partially under the stage, she took a seat on top of it to sing, and her Drake cover transitioned smoothly into her piano ballad “Liability,” which got the crowd to all light up their cell phones.

Lorde then performed my favourite song of hers, “Sober II (Melodrama),” with the box now filled with dancers rising to the rafters behind her. The bass didn’t quite hit you in the face like I was expecting, but it was still a dope performance, as the crowd all sang along. She went backstage as the song played out and the box with her dancers was lowered underneath the stage, and she eventually reappeared wearing a new dress that would allow her to move more. Now going for more up-tempo songs, Lorde was joined by a male dancer as she performed the original version of “Supercut,” and kept up the momentum with the Grammy 2014 Song of the Year, “Royals.”

Keeping up the bright mood with “Perfect Places,” Lorde eventually closed out her set with an energetic performance of her Melodrama smash hit, “Green Light.” The song pulled out all the stops, with the box of dancers in the rafters again, confetti shooting into the crowd, and everyone out of their seats dancing. The crowd clearly wanted more, and so they chanted for an encore, and Lorde returned to the stage with an MPC. She recreated the beat for her song “Loveless” and got the crowd to sing along, before closing the show with an unreleased song called “Precious Metals,” and another Pure Heroine hit with “Team.”

Overall, this was a fun show to attend as my first pop concert. While pop can sometimes put emphasis on lighting and choreography, Lorde makes sure to use these as a complement to her vocal talents rather than a crutch. The New Zealand singer knows how to connect with a crowd and put them in the right frame of mind to vibe with her songs, and is clearly having fun every second she’s on stage. She’s humbly taking in the moment of being able to perform these large stadium shows, and will be continuing through the U.S. throughout April. Canada will get to see her again when she performs in Quebec on July 13 – full tour listings can be found here.