Toronto jazz band BADBADNOTGOOD have been killing stages around the world for years, and they’re back at it with a 2018 world tour, performing throughout Canada this spring before heading out to Europe in the summer. They’ve been building a bigger buzz each year since their online presence went viral in 2011, releasing critically acclaimed instrumental albums, and producing beats for hip-hop artists such as Earl Sweatshirt, Kendrick Lamar and Snoop Dogg, including an entire album with Ghostface Killah (2015’s Sour Soul).

While they’ve performed plenty of shows in their hometown Toronto, I hadn’t seen them since they shared the stage with Ghostface Killah at the Opera House in 2015. Now catching them on the second of two consecutive sold-out nights at the Danforth Music Hall, this would be my first time seeing them headline a show by themselves.

The Danforth was a little slow to fill up, as a band called Standing On The Corner rocked a 40-minute set before BBNG would get on stage. They had different band members playing guitar, bass, drums, saxophone, MPC, and their lead singer would alternate between vocals, percussion, trumpet and even recorders. It was a strange, far-out, psychedelic vibe, as about 90% of the vocals were incoherent, whether they were sung, spoken word, or rapped. The way they used autotuned and filtered vocals as part of their instrumentals reminded me of Kanye West’s production style, although this was more cluttered and hard to connect with.

Standing On The Corner had some cool instrumentals, although it was hard to tell if the way they drowned out the already cluttered, echo-filtered vocals was a stylistic choice, or just poor sound mixing. By the end of their set, the Danforth was a packed house, and everyone was ready to see BADBADNOTGOOD.

BBNG came out and dove right into their instrumental songs, getting the crowd moving with the title track off their most recent album, 2016’s IV. The band seemed to improvise and blend multiple songs together, playing a different tune before jumping back into that up-tempo groove from “IV.” While the original three band members stuck to their roles of playing drums, keys and bass, the newer fourth member Leland Whitty alternated seamlessly between saxophone, flute, guitar, and percussion as they performed a Kaytranada collaboration called “Fall In Love,” as well as more IV tracks.

The band took a break at one point, as Matthew Tavares rocked a solo on piano, bobbing his head enthusiastically as he played. Leland and drummer Andrew Sowinski returned to the stage, jokingly performing ballet-style dancing around Matthew and getting the crowd to wave their arms. Andrew then returned behind his drum set and performed a quick solo before BBNG got into my favourite song of theirs, “Lavender.” Chester Hansen alternated between MPC and bass guitar as the band performed a lengthened version of the song, with improvisations throughout and a build-up of energy that caused a mosh pit to break out! 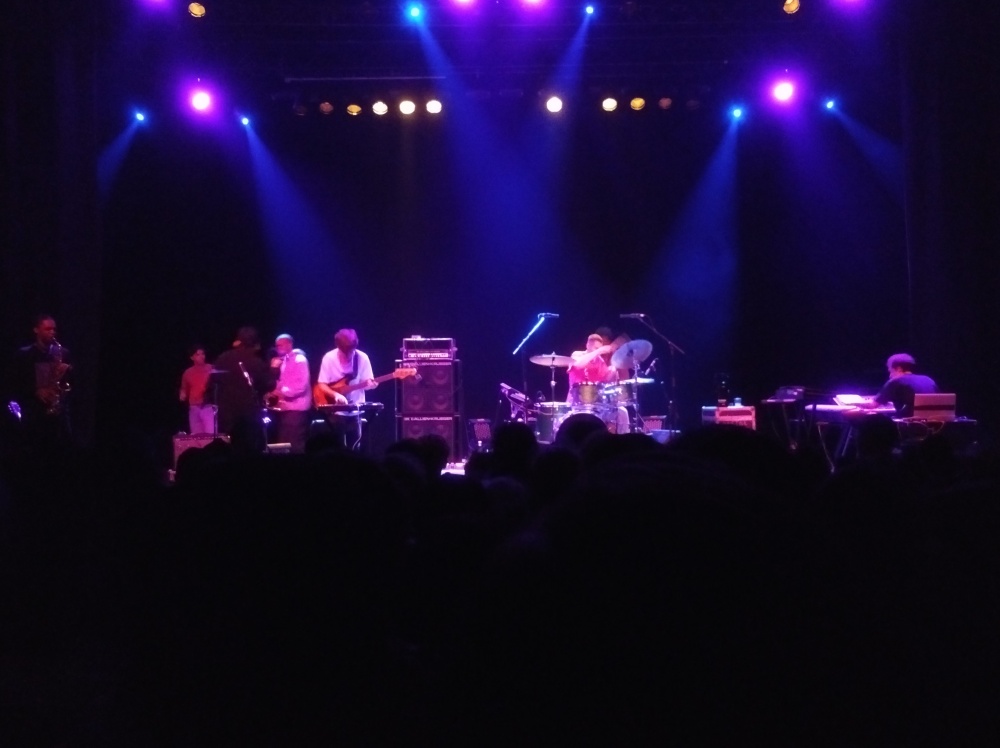 After the wild mosh-pit, BADBADNOTGOOD calmed things down with some throwbacks off their 2014 album, III. They performed “Can’t Leave The Night” and “Confessions” before bringing out the band members from Standing On The Corner to join them for an epic, collaborative performance of “CS60.” With additional instruments bringing more energy to the lengthy song, another mosh pit broke out, and fans were even crowd surfing – something I never expected to see at a jazz concert! Sowinski got the fans to all crouch low as the beat built up, and tossed his shirt as the crescendo reached its climax.

Now drenched in sweat, Sowinski took a break from being the sole band member to speak to the crowd through a microphone, as BBNG brought out guest Sam Herring to perform some vocal tracks. Making his smooth singing seem effortless, Sam Herring nailed his vocals for “Seasons (Waiting On You),” and put a ton of energy into his IV feature, “Time Moves Slow.” He dominated the stage for one last song with BBNG, “I Don’t Know,” and earned thunderous applause as he left the stage.

BADBADNOTGOOD also left with Sam Herring, but the crowd chanted for an encore, to which they obliged. Sowinski got on the mic and thanked the Toronto crowd before the band performed one last song, “Confessions (Part II).” Leland shined on saxophone as the band backed him, and Sowinski encouraged the crowd to break out into another mosh pit as he drummed another crescendo. After almost a full two hours on stage, BBNG humbly took in the moment with some pictures with the crowd before leaving.

For my first jazz concert, this was extremely fun, and a lot more energetic than I thought it would be. The Danforth crowd gave nothing but positive vibes, even with the rough mosh pits breaking out, and BADBADNOTGOOD put on a wicked show even before bringing out their surprise guests. The band members get fully locked into the songs they perform, while Sowinski expertly commands the crowd between his drumming, getting them clap, jump, and wave their arms at the right moments. With performances like this, BBNG are well on their way to becoming one of Canada’s all-time great bands, and it will be exciting to see what this young group has in store for the future.