We started 2015 off with Ghostface Killah and BadBadNotGood at The Opera House, and just as he told the crowd at that show, we’re right back here again to start the second quarter of the year with Ghostface at the same venue.  Rather than bringing his Sour Soul collaborators BBNG, Ghost has brought some Wu-Tang Clan legends, GZA and Cappadonna to join him this time.  This would be a pairing of two of Wu-Tang’s most successful solo MCs, as Ghostface has the largest discography of all of his fellow Clan members with 12 solo albums, and GZA’s Liquid Swords album is arguably one of the best solo projects to come out of the group.  I’ve been to so many Wu-Tang shows over the past five years, seeing all kinds of group rosters and solo shows (including a Ghostface solo show in November where Cappadonna came out as a surprise guest), and this would be yet another unique one.

I’ve seen Ghostface perform with BadBadNotGood, with Raekwon, with Cappadonna, with Raekwon and Cappadonna, with Sheek Louch, and with both full and partial Wu-Tang Clan rosters.  I’ve seen GZA perform both solo and with the Clan, and even attended a lecture he held at the University of Toronto in 2013.  I’ve never before seen this odd grouping of Ghostface, GZA and Capp, despite them all being from the same crew.  The great thing about the Wu-Tang Clan is there are so many ways to split up the group for live shows, and every combination is going to bring a unique selection from their extensive discography, built over two decades.  Seeing the spotlight on both Ghostface and GZA at the same show (with Cappadonna as support) would be interesting. 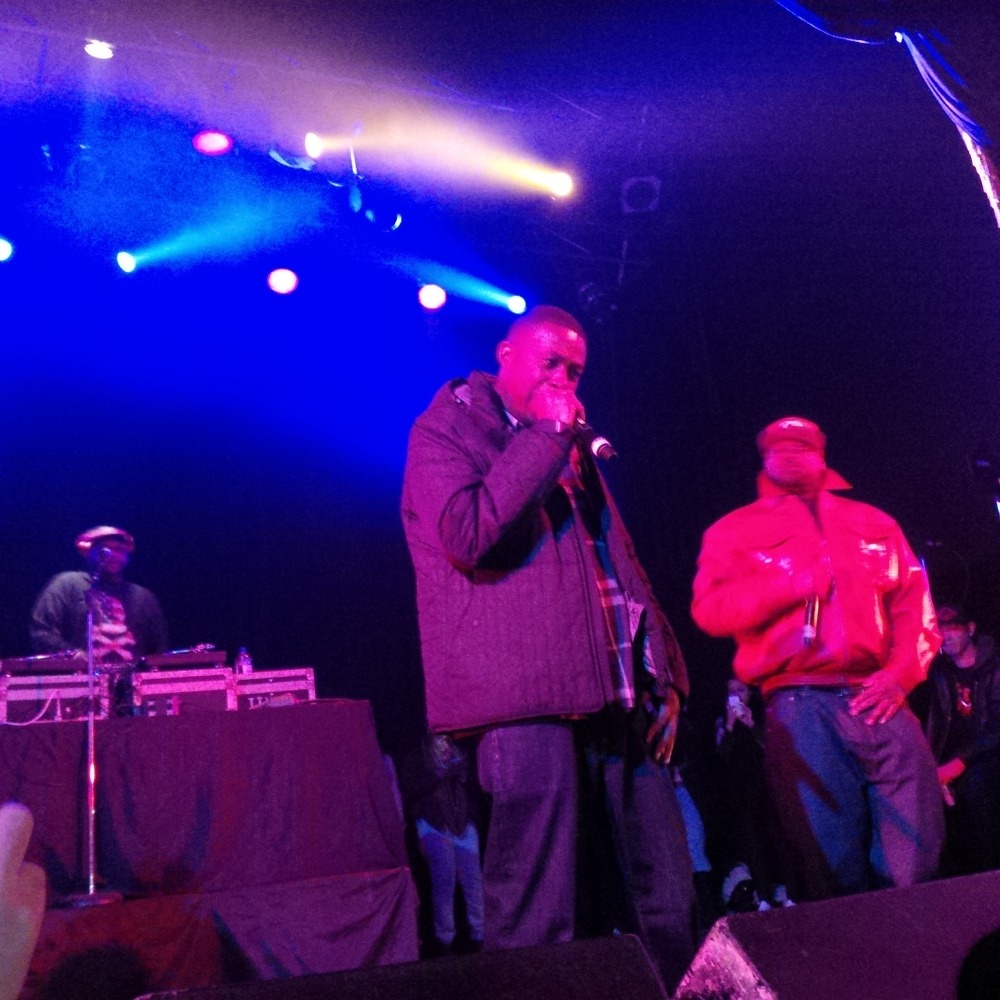 We got to the venue about an hour and a half after doors had opened, and the Opera House was still kind of empty.  This was my first Wu-Tang show where the building wasn’t filled within an hour of doors opening, although the tickets for this one were expensive and it was also Easter Sunday.  Me and my homie checked out the merch booth, where we found Killah Priest hanging out and selling his t-shirts.  He was cool enough to take some pictures with us, even though we didn’t buy any of his merch (I had been waiting for years to be able to cop a GZA logo tee instead).  Pretty soon the local opening acts started things up, including Raz Fresco, who had been here last time Ghostface performed.

The building slowly filled up as DJ Ritz played some classic Hip-Hop tracks after the three openers did their thing.  Despite solid performances, the crowd kept starting a “Wu-Tang!” chant whenever someone new came on stage, and they finally got their wish about a half hour past midnight.  The house lights went dark and the stage lights set the atmosphere, as GZA came out first to “Duel of the Iron Mic”.  After performing all three verses (his own plus Masta Killa and Inspectah Deck’s), GZA walked away and Cappadonna then took over with the Wu-Tang Forever cut “For Heaven’s Sake”.  Next, it was Ghostface Killah’s turn, as he came out to his own solo track, “One”.

After all three MCs were on stage, they took turns performing their classics.  GZA performed both Method Man’s and his own verses from “Shadowboxing”, Cappadonna performed his version of “Run” off of The Pillage, and Ghost and Capp performed “Fish” together.  GZA then did what seemed like a freestyle verse, although I recognized a couple bars from the intro freestyle he did at his last solo show in Toronto.  Ghostface and Cappadonna continued into the classic “Ice Cream”, and they kept the rotation going as GZA performed his verse from Raekwon’s “Guillotine (Swordz)”, Cappadonna performed “’97 Mentality”, and Ghostface performed “Black Jesus”.

The music just kept going, as GZA performed the classic “Clan In Da Front”, Cappadonna performed “Milk The Cow”, and Ghostface did “Mighty Healthy”.  The crowd sang along as GZA did “Cold World”, and Cappadonna came down to the barricade in front of the crowd to do his verse from “Winter Warz” among the people, with the beat switching from Biggie’s “Who Shot Ya” to Dr. Dre’s “The Next Episode“.  They stuck with some more up-tempo tracks as GZA performed “Breaker, Breaker” before getting the crowd jumping to the beat of “4th Chamber”.  Although GZA didn’t perform his verse on the latter track, Killah Priest came out to rock after Ghostface.

Next was a classic Wu-Tang segment, as GZA came back to perform “Reunited” before they all took turns doing covers of other Clan members’ verses.  They did RZA’s verses on “Tearz” and “Wu-Tang Clan Ain’t Nuthing Ta F Wit” and Raekwon’s verses on “C.R.E.A.M.” and “Can It Be All So Simple”, with the crowd lighting up their lighters and cell phones on the more mellow track.  They of course did their Ol’ Dirty Bastard tribute by getting the crowd to sing/rap along to “Shimmy Shimmy Ya” and “Got Your Money”.

GZA then came back and performed his solo classic “Liquid Swords” before doing an acapella freestyle verse, which seems like it will probably end up on his upcoming Dark Matter album.  They then teased a song for the ladies, Ghostface’s “Cherchez La Ghost”, and also a song for the fellas with Raekwon’s “Incarcerated Scarfaces” before playing the Wu-Tang Clan’s “Triumph”.  We all rapped along to Inspectah Deck’s classic verse before Cappadonna performed his own verse, cutting the song off afterwards to end the show with the usual “peace” chant.

Overall, this was an awesome show that can stand with all of the other Wu-Tang shows I’ve attended.  This one had unpredictability going for it, as GZA, Ghostface and Cappadonna just kept giving the crowd hit after hit after hit.  You never knew which track would be performed next, or which of the three MCs would perform their verses on those tracks.  Just when you thought you picked up on their routines as individual performers, they mixed things up for this show and vibed well off of each other’s energy.  They also had a straight-to-business approach, as they didn’t spend much time talking to the crowd but rather just went straight into their songs.

The Opera House proved yet again to be an excellent venue for Hip-Hop, as the up-close and personal setting suits Wu-Tang artists well.  It was hard to tell how packed the building was from the very front, but as usual Toronto represented and knew all of the Wu-Tang lyrics and chants.

Remember to check out the SYpherSights Youtube channel for concert videos: https://www.youtube.com/channel/UCjiIhS7fd3t1ZutK1va7w8g/videos